To have tasted wealth and then lose it, is worse than never having it. But if the only way out is to have a pact with the devil, so be it. 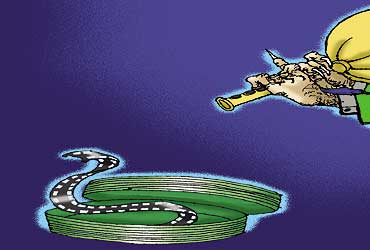 outlookindia.com
-0001-11-30T00:00:00+0553
Granted, most of us are not brilliant conversationalists. At least we speak somewhat intelligibly. But that ability, it seems, is beyond the pale of some of our famous and the infamous. That a 43-year-old adult, and one as famous as Sanjay Dutt, talks so silly defies belief. The long-haired, droopy-eyed macho hunk becomes a cartoon—not unlike that muscly dolt "Big Moose" in Archie comics, whose intellectual and conversational abilities don't go beyond muttering "duh". Sanjay doesn't go much beyond "ji, ji".

It would have been comic except this great star is jiji-ing mafia don Chhota Shakeel, as revealed in the much-publicised tapes. The fragility of stardom, the indignity of success, the price of fame is underlined most poignantly by Sanjay's abject servility to the don. All that tough, devil-may-care filmi dialogue is confined strictly to the silver screen. In reality, the roles seem reversed. The macho stars are the ones kowtowing to the mafia bosses and the pretty heroines are actually dancing to their tunes...for roles bagged, for favours granted, are being granted and will continue to be granted, provided they behave according to the mafia script.

Deep down, most people envy the stars' rags-to-riches story. That a Virar ka chhokra can become the rich and famous Govinda fills people with hope that if destiny is kind, they too can make it big. Of course, what is most exciting about Govinda is not his acting career, but the wealth that has suddenly come his way. He now lives in a fancy house, owns fancier cars and wears the fanciest clothes. How lucky are these filmstars who traipse on this rainbow path that always leads to the pot of gold.

But the wearer knows where the shoe pinches. What the tapes confirm is that the secret life of these stars is pure hell. They are driven by insecurity, fear and vulnerability. Evidently, to get into showbiz, to remain there, and to revive sagging fortunes, some have had to sup with the mafia devil. If the star puppets don't do the bidding of the shadowy, underworld puppeteers, they are strangled or dropped. For filmstars addicted to money, fame and glamour, oblivion is as scary as death. Fear of losing is as gut-wrenching as the loss itself. To have tasted fame and wealth and then lose it, is much worse than never having it at all. It helps when you don't know what you are losing. But these actors do. Having tasted the luxuries of life, the heady champagne of public adulation, the power of fame, the dizzying glitz of showbiz, they are terrified to slide back into a life of drudgery, poverty and anonymity. So if the only way to achieve or retain success is to have a pact with the devil, so be it. But the devil always wins, he will extract his pound of flesh and the star must pay up. The umbilical cord between the star and the don keeps both in business. But if the star doesn't obey, this cord curls into his noose. So, away from the big bucks, extravagant lifestyles, flashy parties and popping flashbulbs, the stars are trapped in a dark, subterranean world of threat, blackmail, fear, retribution and death. The danger is real because the ones who call the shots are mafia dons. You don't mess with them. Knowing the real, behind-the-camera situation of the stars, surely, not many would like to trade their safe, secure, albeit none-too-luxurious cocoon for this dangerous snake pit. At least one sleeps easily at night, even if it is on a hard bed.

Corruption and vice is perhaps inevitable in any big industry, especially showbiz. In the old days, vice was symbolised by the casting couch. Now it is telephone calls from mafia dons. Their amazing flexibility and ability to adapt to new situations is what makes the underworld survive and endure. With every crisis, the mafia mutates.In the 1970s, they smuggled gold, in the 1980s, they were into hawala transactions, in the 1990s, they smuggled weapons and RDX, collaborated with terrorists and dabbled in real estate. Now they have their stranglehold on Bollywood, India's best export, rivalling even software, in its glamour, reach and cultural impact. Mafia activities thrive in the dark attic of Byzantine laws, prohibition and government controls. The forays of the underworld into different businesses over the last three decades clearly reveal that liberalisation and transparency is the light that sends them scurrying out from their holes, making their ventures unprofitable, forcing them to abandon old playing fields and find new hunting grounds.

The government took a landmark step when it gave Bollywood industry status. If its denizens want to live a decent life, they have to now follow different rules—borrow white money from banks and not black money from the mafia to fund their films. They may have to lower their remuneration, accept cheques and pay taxes. In short, they have to earn less, but an honest wage, if they want to live in dignity and sleep soundly at night. The government has thrown them a saving rope. And a spunky, efficient minister like Sushma Swaraj can be a trustworthy catalyst in Bollywood's transformation from a shady den of vice to a transparent, well-managed corporate industry.

Of course, he was referring to himself as the cleansing agent, but ironically, Chhota Shakeel got it right when he told Sanjay's gang: "If you people help a little, the industry would be rid of this filth." It is for the bigwigs of Bollywood to let go of the mafia strings and grab the rope the government has thrown them, corporatise and climb back to safety. Then, as Harish Manjrekar says in the tape: "Yeh gandagi khatam ho jayegi na to bahut mazaa ayega. (If this filth is removed, it'll be so much fun)." It's really up to Bollywood's stars, directors, distributors and producers. If they don't seize this opportunity, they will continue to wallow and may even drown in their dangerous, muddy pool. Then, they have only their cowardice and greed to blame.