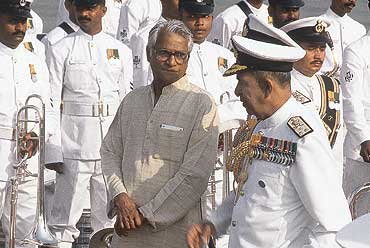 New Delhi has been consistently making the point that in the Indian Ocean India is at the very fulcrum between the Straits of Malacca and the Gulf of Hormuz. On his trip to Washington, Fernandes was told the US would be happy to have Indian naval escorts for US navy vessels bound for Southeast Asia. This concedes New Delhi's argument that the Indian Ocean is India's natural area of operations—and influence.

The US proposal is now under active consideration of the Cabinet Committee on Security Affairs. When cleared, it will mark a progress from the "passexs" stage—a naval term describing the manoeuvrings and signallings at the time ships of two friendly governments pass each other, thus underscoring their friendly relationship. It would also represent an advance over the Malabar-type exercises that were coordinated in 1995-98, involving complex exercises that required advanced planning.