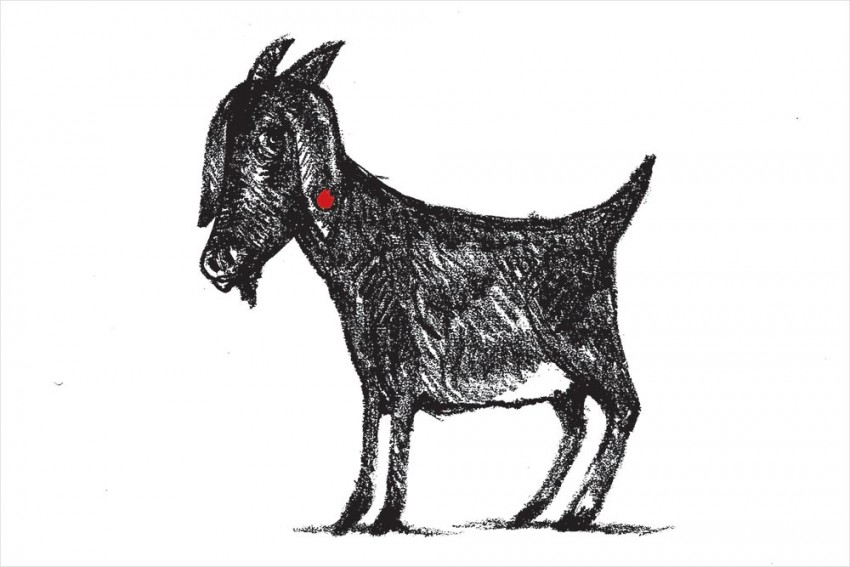 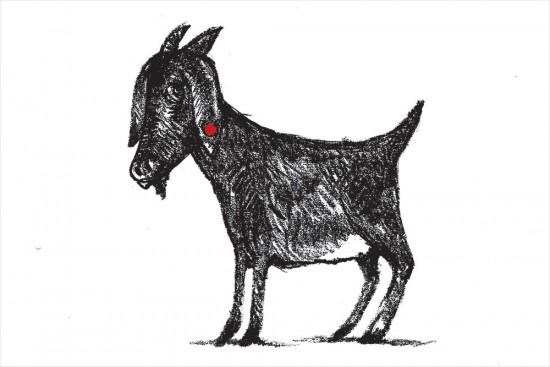 Poonachi Or The Story Of A Black Goat
By Perumal Murugan Translated By N. Kalyan Raman
Westland/ Context | Pages: 180 | Rs. 499

The main problem with getting Poonachi’s ear pierced was the set of questions it would provoke. ‘Where was she born? What was her mother’s name? Who raised her mother? How much was she bought for?’ The couple who owned Poonachi would have to res­pond to such questions. If they rep­lied that they had received the newborn as a gift, that a man who looked like Bakasuran, the gluttonous demon, had given her away, the authorities might register a case of false testimony.

‘Bring that Bakasuran here,’ they would say. ‘Has he got his ear pierced? He could be a spy from a foreign country; are you his accomplice?’

Accusations would be flung at the couple like arrows. ‘If he was in possession of a kid whose ears were not pierced, he might be an enemy of the regime,’ the authorities would declare. If they were to ask, ‘How did you come into contact with him? What else have you received from him?’ the couple would have no answer. The regime had the power to turn its own people, at any moment, into adversaries, enemies and traitors.

After taking everything into account, they decided to wait for ten or fifteen days. In that time, the pregnant goat in their yard would have delivered her litter. Her first pregnancy had yielded just one kid; the next few uniformly yielded two kids each. They could easily club Poonachi with two newborns and claim a litter of three. Her puny shape would support that claim. Her black colour was a problem, however. Most of the goats in the state were white. A few were brown, but black ones were rare. Once upon a time, so the lore went, the state teemed with black goats. Since they could not be recognised in the dark when engaged in any criminal activity, the regime had, it was rumoured, deliberately wiped them out. Even so, black goats could still be spotted here and there. Their colour provoked instant hostility. When they saw Poonachi, the officials would go on the alert immediately.

From that day on, Poonachi got a ­red­uced quantity of even the thin gruel she had to live on. The old woman was intent on not letting her grow fat. They would take the kids to the authorities four or five days after the pregnant goat delivered her litter. At that time, there should be no visible difference between Poonachi and the other two newborn kids. The old woman had deferred the idea of feeding Poonachi oilcake water. Even the spot where Poonachi usually slept at night was changed. She was locked up inside the goat hut. The old woman kept a wooden stick on her basket for extra protection.

For a few nights following the raid in which Poonachi had been nearly carried away by a wildcat, the old man and his wife didn’t sleep a wink. They expected the wildcat to come again. When one of them caught a nap for a few minutes, the other stayed awake. Fortunately, old people don’t need more than a few hours of sleep.

Poonachi had become frightened of the dark. Even though she was caged inside the shed, she felt reassured only when she heard the old woman’s voice. She had a recurring dream of hanging from the maw of a grotesque figure, and often wailed aloud unexpectedly.

The old woman took a vow of supplication to Mesagaran, their clan deity. ‘If this Poonachi reaches puberty and has a litter, the first male kid will be yours, Mesayya,’ she vowed.

Eleven days after the wildcat had tried to snatch Poonachi away, their nanny goat delivered her litter: two kids, just as they had expected. Both were male. Male kids were always somewhat robust at birth; the females turned out a little weak. If they claimed that Poonachi was born following the two kids, the authorities might believe them. The couple were pleased with the situation.

The two kids started jumping about and playing from the day they were born. It was decided that all three would be taken to the authorities on the third day to get their ears pierced. The old man was ­usually eager to step out of the house, but this time he told his wife, ‘I can’t do it. You go ahead.’ She didn’t try and compel him. How could a lone woman take a nanny goat and three kids all by herself ? How would she manage once she reached there? But who else was there to acc­ompany her anyway? She had no option but to suffer the ordeal, so she set out alone from her village.

Before she left, she made sure that the two kids were well fed by their mother. They were tender newborns; once they were fed, they went to sleep. She put Poonachi in the basket with them. She also kept the food container in the basket, covered with a cloth to keep the kids from toppling it. 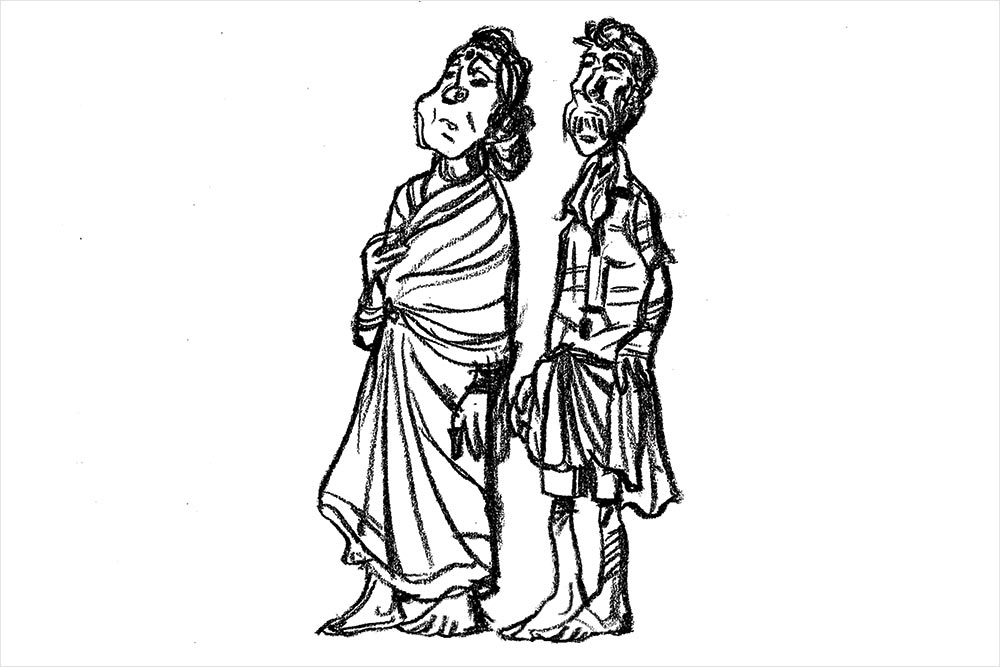 She started before sunrise when it was still dark. Since the nanny goat was used to the old woman, there was no problem: she went along wherever she was led. Every now and then, she would cry out for the kids. If the kids responded with a cry from inside the basket, it was enough to appease the nanny goat. She walked on quietly. At dawn, the old woman had fed her a bunch of groundnut leaves and filled her belly too. With the basket on her head and the nanny goat in tow, the old woman crossed the fields, reached the road and continued her trek.

The ear-piercing office was at a distance of three miles from their home. When she arrived there, she found a very big crowd waiting ahead of her. She couldn’t tell exactly how many people there were, but somehow she found herself a spot in the queue. She had to be vigilant and watch out for anyone trying to join the line out of turn. Whenever someone app­roached a person ahead of her, she suspected that they might be trying to infiltrate the queue. She was suspicious of them all. The officers were expected to arrive only at ten o’clock. If she had arr­ived later, she would have been pushed further back in the queue. Even so, she could see that her work might not be done that day. If she actually managed to get a token in her hand, she could be confident of getting done before nightfall. She could start the next morning and make her way slowly back to the village.

Some people who were ahead of her in the queue had sheep with them. Since sheep deliver only one lamb at a time, their work was done quickly. The old woman assessed the situation. There were about a dozen goats and a lot of sheep ahead of her in the queue. Most of the people happened to be familiar faces. She sat down in the queue and chatted with them. When the sun had climbed a little higher, she mashed some soft rice into gruel and drank it up. Since she would need to eat at least twice more, she made sure that she ate just enough to quench her hunger and had a sufficient amount left over. She lifted the kids out of the basket and set them down. They were suckled by the nanny goat. Enlisting the help of a girl beside her, she made sure that Poonachi also got a couple of feeds.

‘Yes, she is, but the mother won’t look at her, it seems.’ Some nanny goats had the tendency to ignore their own kids and push them away. The old woman used this fact to her advantage.

As time went by, the queue grew longer and longer. The office compound was in a state of permanent uproar with the bleating of goats and the endless chatter of those waiting. There was a hullaballoo when some people entered the queue in the middle, claiming that they had res­erved their spots earlier. A couple of men from the office came out and warned the noise-makers, then led them to the back of the queue. They also arranged for some who were at the back to go up to the front. No one could question what they were doing. They would simply say, ‘The officer told us to bring them in.’ Moreover, these men would pick on whoever dared to ask questions, purposely delay the work when their turn came and give them the run-around. It was clear that the work would proceed only if those who were waiting held their peace and behaved humbly with the officials.

Everyone was well versed in how they were expected to behave towards the reg­ime. They had mouths only to keep shut, hands only to make obeisance, knees only to bend and kneel, backs only to bend, and bodies only to shrink before the authorities. But they had a difficult time doing all this while trying to keep their goats under control. They had to safeguard their place in the queue as well as protect their goats and possessions. As the sun rose higher and higher, everyone covered their heads with a cloth. There were many different kinds of people around that compound. Poonachi grew frightened and took refuge in the old woman’s lap.

‘Lie down without butting your head against me. Don’t be scared, baby. It will be no worse than being pricked by a thorn.’ The old woman stroked Poo­­­n­a­chi’s body to calm her nerves. ‘Why are they piercing the ears of these goats, ayah?’ asked a young girl behind her in a secretive whisper.

‘So it will be a marker for each goat,’ the old woman replied the way she knew it. ‘They will pierce an ear and hang a hoop from it. There is a number embedded in it, they say. With that number, they can find out everything about the goat. Goats have horns, don’t they? Suppose they get a little angry and point them at the reg­ime? Such goats have to be identified, right? That’s why they all have to get their ears pierced.’