Vajpayee, in his diplomatic tete-a-tete with Bush, steers clear of focusing exclusively on Pakistan 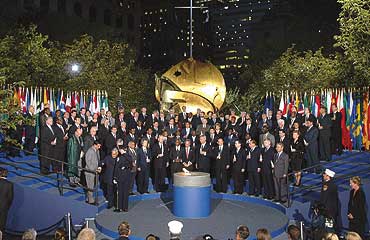 outlookindia.com
-0001-11-30T00:00:00+0553
In a week dominated by Iraq and the assassination of Jammu and Kashmir law minister Mushtaq Ahmed Lone, it seemed almost unlikely that Prime Minister Atal Behari Vajpayee and US President George W. Bush would find time to talk about anything else other than the threat of terrorism—and the global war against it. But when the two leaders met at the United States' Permanent Mission to the United Nations, it was bilateral relations that dominated their parleys.

Foreign secretary Kanwal Sibal described the Bush-Vajpayee meeting, which lasted for 35 minutes, as "very friendly and very warm". In international diplomacy, such a meeting couldn't have been described otherwise. But what was refreshingly different this time around, in contrast to other Indo-US meets that had focused primarily on terrorism, was that Bush, on more than one occasion, voiced his commitment to a "broad, strategic relationship with India", hoping that Vajpayee and he could together lay its foundation. One way of doing this, both leaders agreed, was to cooperate in the fields of space technology, diverse forms of energy, commerce and science.

India had earlier decided against Vajpayee directing the spotlight exclusively on terrorism, believing the gains from the US war against terrorism couldn't be squeezed beyond what had already been achieved. Post-September 11, terrorism had completely overshadowed other aspects of Indo-US bilateral relations, and considering that the Republican dispensation in the US is already midway into its tenure, there was the urgency among policy-makers to immediately address other pressing issues.

But the issue of terrorism—and Pakistan—did surface at the meeting. And it was Bush who, as Sibal said, took the "initiative" to express his concern over the killing of candidates contesting elections in Jammu and Kashmir. Much to the Indian delegation's glee, the US president not only condemned recent political assassinations in the Valley but also dismissed the "excuse made by some that terrorism and freedom struggles are one and the same" and that a freedom struggle must abide by the tenets of "freedom" and not take innocent lives.

Bush's remarks were significant in the backdrop of the fiery, anti-India speech Pakistan President Pervez Musharraf had earlier delivered to the UN General Assembly. Musharraf had accused India of "misusing the rationale of war against terrorism" and seeking to "delegitimise the Kashmiri freedom struggle, tarnish Pakistan with the brush of terrorism and drive a wedge between Pakistan and its coalition partners". He further thought that the elections in Kashmir would "once again" be rigged. "Such elections under Indian occupation will not help peace; they may set it back, in fact," the Pakistani president had declared.

His speech had Indian officials bristling. Sibal thought the Musharraf's speech was "a compendium of all the negatives (Pakistan keeps talking about)" and that he had raised "all the wrong issues". External affairs spokesperson Nirupama Rao, too, pitched in: "The address shows the utter paralysis within the decision-making apparatus in Pakistan, a country that has abandoned democracy in favour of dictatorship and yet makes empty noises about freedom and determination."

Musharraf's reference to elections in the Valley did gall the Indians. Pointing to his brazen comment that he was trying to put his country on the path of a "sustainable democracy", a senior Indian official quipped, "By that he means any democracy that can sustain Musharraf." Indeed, acrimony and mutual recriminations between India and Pakistan have decidedly acquired an amazing, enduring permanence in the shifting sands of diplomacy. The next round of howling will be initiated by Pakistan which awaits Vajpayee's speech, which hadn't been delivered at the time of writing this report.

But what India can draw heart from is that senior officials in the Bush administration assured the Indians of their continued attempts to work their leverage on Pakistan to dissuade Musharraf from fomenting terrorism. In Washington, earlier this week, secretary of state Colin Powell told Union external affairs minister Yashwant Sinha that Pakistani leaders had been asked not to interfere in the Kashmir elections. But Powell also voiced his hope of a "free and fair" poll in the Valley.

Obviously, the UN General Assembly was largely about Bush's campaign against Saddam Hussein. With the US president urging the UN to act against Iraq before it was too late, this issue—and India's interests—surfaced during the Bush-Vajpayee meet. Aware of India's opposition to any pre-emptive military action against Baghdad, Bush assured the PM that he wanted to resolve the issue through the UN and its Security Council. His comments on Iraq, he said, should not be seen as a declaration of military action but were more about stating the nature of the problem and the method of dealing with it.

Vajpayee met other world leaders, too. He talked to Danish Prime Minister Anders Fogh Rasmussen, whose country holds the rotating presidency of the 15-member European Union, and complained about the attempts of "cross-border forces to intimidate" the electorate in Jammu and Kashmir. "It is our expectation that making this point persistently has had a tremendous effect on our interlocutors," Sibal said. He further said that the US was faced with a "diplomatic challenge" of dealing with the contradiction of fighting a war against terrorism with a country that is itself indulging in terrorism.

But it wasn't Pakistan all the way on Vajpayee's visit to New York. On September 11, he met the families of people of Indian origin killed in the terrorist attacks on the World Trade Center. Vajpayee spent 40 minutes with them at the plush New York Palace Hotel, listening to their woes and consoling them that they had become a part of the struggle against terrorism.

Most relatives had other more pressing worries, requesting Vajpayee to take the issue of their residence status with the US administration. Shafali Agarwal, whose husband Alok died in tower one of the WTC, told Outlook: "We have asked him to tell them that all we want are our rights. After all, it's not our fault that our family members were killed." Vasantha Velamuri, who lost her husband Sankara in the September 11 disaster, complained to the prime minister that the US consulate in Chennai had twice turned down a visa application from her married niece. "I have no children and now, after my husband's death, I am all alone. It would be nice if she could visit me," she said, hoping the prime minister would succeed in persuading US officials who haven't found her sorrow deep enough to overcome their suspicions of potential immigrants.

Vajpayee also joined New York Mayor Michael Bloomberg and leaders of 91 nations to light an eternal flame at a September 11 memorial ceremony at Battery Park, a few blocks away from where the twin towers once loomed. The number of people of Indian origin killed in the attacks was second only to Britain.

Vajpayee also met American Jewish leaders and assured them that the situation in Gujarat was under control, that the violence there was "an aberration". Gujarat continues to dog India. For, the one aspect of Musharraf's speech the Indian delegation wasn't obviously too enthusiastic about directly countering, was his reference to Hindu fundamentalism, the Gujarat violence and the 2,000 who perished there. This toll is only 801 bodies less than that of those who died in the twin towers of the WTC.