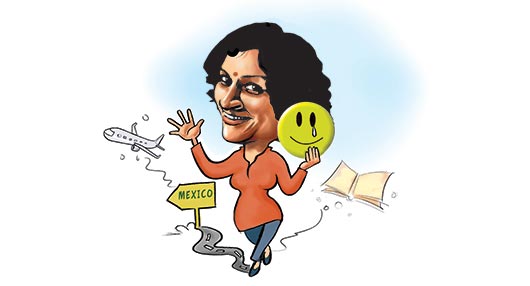 Cyrus Mystry and Arnab Goswami may be the big bang exits in the last few days, but there has been another quiet, but equally surprising, resignation too. Karthika V.K., the nicest and the sharpest professional in publishing, has quit as the publisher and chief editor of HarperCollins India. “I feel completely liberated. It was a very tough decision to make but now that it has been made, it's very exhilarating,” she says. But why now? “Well, I’ve been doing exactly the same thing for 20 years now, 10 with Harper and 10 with Penguin. I wanted to do something different.” She is not sure what that might be. It could be setting up something new with like-minded people, but it will be in the area of writing and publishing, she says. But all that’s for next year. Right now, after her last day at Harper on November 18, Karthika says she is taking a break—“the longest in 20 years”. She will spend time with her sons Shiva and Shasta and may go to the jungles of Mexico with her husband Vivek Menon, who is the CEO of Wildlife Trust of India.

His book may have got mixed reviews, feminists may have sniggered at his heroine, but Chetan Bhagat’s One Indian Girl is a runaway blockbuster. News from the street is that 90,000 copies of the book were sold in the first weekend of its launch—a veritable Salman Khan superhit in publishing parlance. Critics have crowed that Bhagat's protagonist Radhika, portrayed as a firebrand professional, is actually a regressive character. “That’s their view. I have based my heroine after hundreds of int­erviews with girls her age in various parts of India, and this is how most of them think,” says Bhagat.

Riding The Mind On Mode Zero