How books being turned into movies is yet to take off in India and an introduction to the Flashman series.

Books being turned into movies is yet to really take off in India. There have been a few attempts, like Basharat Peer’s Curfewed Nights being adapted by Vishal Bhardwaj as Haider. But there really hasn’t been a blockbuster series like Hollywood’s Lord of the Rings, Twilight or Hun­­ger Games. That could change now. Filmmaker Karan Johar’s Dharma Production, which had bought the rights of Amish’s first bestseller, The Immortals of Meluha, has now acquired them for the entire Shiva Trilogy, which they hope to turn into a big budget film series by next year. Rights for Amitav Ghosh’s The Ibis Trilogy have also been sold. The script of the first book, Sea Of Poppies, has been worked upon, but is stuck at the funding stage. It would be amazing to follow the Ibis on the big screen! 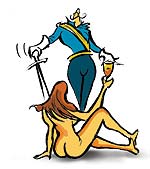 Talking of historical fiction, one of the most delightful accounts of the genre is the Flashman series by George MacDonald Fraser. Harry Flashman is a fictional soldier of the British army, a first-rate ruffian, scoundrel (in his own words) and a poltroon, who is only interested in women and drink, but is present at the right time in prized 19th century colonial scrapes mostly by luck, often by stealth and is repeate­dly (tho­­­ugh erroneou­sly) covered in glory. An old Flashman recounts his adventures in 12 books and in the first, set in 1839, Flashman comes to India, to Caw­­n­pore, Calcutta, and then to Afgha­nistan, where he is hounded by the blo­odthirsty tribes of Akbar Khan. The nov­els are true to history (they've footnotes), and though Flashman is abominably sexist and racist, he is equ­ally scathing about British soldiers and politicians. They’re a swashbuckling read.

The Infinity of Finiteness