Why the Crossword literary awards can never be the Indian Booker? They drag their prize ceremony, ignoring news deadlines for print and TV 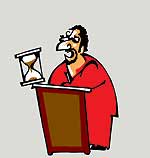 Here’s another reason why the Crossword literary awards can never be the Indian Booker: they drag their prize ceremony on till late at night, ignoring the crucial factor of news deadlines for print and TV channels. Unlike the Booker ceremony that’s orchestrated to coincide with prime time TV news in the UK. To start a literary prize function at 7 pm, then waste the next three hours with speeches and tabla recitals by unknown child prodigies before announcing the prize is asking to be ignored by the media. Which is what happened last Friday night when the Crossword awards were announced in Mumbai—too late for the day’s news and too dead for next day’s papers. Luckily for them, some prizewinners were more media savvy—tweeting the results to those who cared enough to wait up for them.

Adding to the lameness was the jury’s decision to cop out. The three judges in its most prestigious category—Indian Fiction—ended up choosing not one but two novels as the prize-winners—Omair Ahmed’s Jimmy the Terrorist and Anjali Joseph’s Saraswati Park. I’m not quite sure what’s the message this jury wants to send out: that neither is a clear winner or that both were equally outstanding.

Ashwin Sanghi, who won the award for Chanakya’s Chant in the popular category (by online voting), clearly didn’t trust Crossword to spread the word about who won. He hired his own PR agency. Makes you wonder: if a PR agency can do so much for their client’s book after he’s won, imagine what they can do to make it win!