A socialite who ditched the litfest twice in a row, a writer who begs for anonymity and why having your biography written by your wife is hardly enviable

Coves On A Page 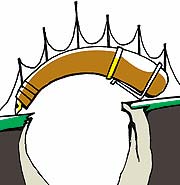 Once the Kovalam literary festival gets over its ambition to be on the international litfest map, it will probably settle into a useful role: as a bridge between trade publishers based in Delhi, authors big and small writing in English and their readers and translators down south. The litfest’s second instalment (Oct 8&9) was a thinly attended affair, thanks to last-minute dropouts, including Shobha De (the second year running where she’s ditched the litfest; organiser Binoo John swore he won’t invite her again). And yes, regardless of the accusation of being “too elitist”, the litfest is determined to carry on at Kovalam’s lush Taj Green Cove Resort venue.

It’s unusual to find a writer at a litfest who begs for anonymity, but Burmese dissident writer Ma Thida shunned the TV cameras at Kovalam: her safety, and that of other writers jailed in Myanmar depended on it, she said. On why she chose to write her novel in English, she replied: “Because if I wrote in Burmese, I can’t stop.” Now that’s a good reason to write in a language not your own: to keep the writing lean and thin.

Having your biography written by your wife is hardly enviable, as Om Puri discovered at the reading from his forthcoming biography by wife Nandita. In one slide, she showed the...