A Duel For Dan 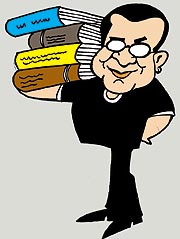 It’s never been a good idea to launch a big book in the season of mithai dabbas. But the poster boy of our publishing industry, Chetan Bhagat, is standing the rules on their head yet again. His fourth book, 2 States: The Story of My Marriage, is going to be launched a week before Diwali, on October 9. Bhagat says even Dan Brown’s new book can’t stop him from selling 10 lakh copies in 10 weeks. Ironically, he’ll never make a fortune, for his books are priced at a suicidal Rs 95. So, the number of copies he has to sell to break even get higher by the year, thanks to inflation. No wonder the top-selling Indian author took so long to quit his day job in an investment bank. It’s only been a few months since he quit, but Bhagat is already planning to turn to writing screenplays instead of novels.

It must be the recession, but the Kovalam literary festival (Oct 7-9) has downsized its list of authors. Last year, among the 18 authors who participated in the litfest were Shashi Tharoor, Gulzar, Tarun Tejpal, Patrick French, William Dalrymple besides Malayalam writers like Paul Zacharia and M.T. Vasudevan Nair. This year Shobha De is the queen bee, with both Amitav Ghosh and Daniyal Moinuddin dropping out.

With the Frankfurt book fair just two weeks away, there’s none of the excitement about big deals struck by Indian writers. Remember when Aravind Adiga’s The White Tiger was the big buzz at the fair? In these recession times, the only books likely to make news are either cookbooks or dog tales. The exception seems to be Prince Charles’s book on global warming.