You know what they say—a wise politician waits until he (or his political career) is dead before writing a memoir! 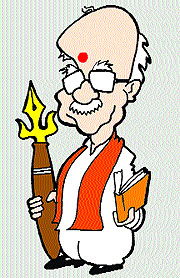 Voice of Advani
With the NDA’s prime ministerial candidate L.K. Advani poised to launch his supposedly no-holds-barred autobiography My Country, My Life next week, his political aides are finding themselves thrust into a challenging new role: book publicists. While Advani’s publisher Rupa takes a backseat, his office has created a special team led by Arun Jaitley to steer the memoir clear of controversies. Not easy, considering Rupa has already sent a flier out promising a "riveting" read and a "gripping" story. You know what they say—a wise politician waits until he (or his political career) is dead before writing a memoir!

Rush for Rushdie
It’s not just the bookies who think Salman Rushdie’s Midnight’s Children will be the top contender for the Best of Booker this year, on its 40th anniversary. Former Booker prize judges, polled by the Guardian newspaper, seem to think so too, with Yann Martel’s Life of Pi coming a close second. But Penguin seems to be betting on Arundhati Roy’s God of Small Things, judging by the black-and-green gilded edition of GOST they’ve brought out as a 10th anniversary edition. It looks good enough to eat, if not re-read.

A Tired Judge
If you think being a Booker prize judge is fun, you should read what former judge David Baddiel (on the 2002 panel) has to say: "I found just reading those books soul-destroying. Your critical faculties get blunted and a lot of the books have been written with an eye to winning a big prize and you see that screaming from the page," he is quoted as saying in the Guardian. "After a while, I thought, ‘I don’t want to read another book set in 14th-century Mongolia’."