It Pays To Be Pak Prez 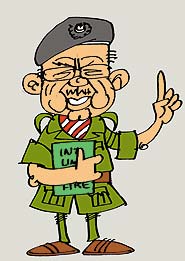 There's a lesson or two for publishers here in the runaway success of Gen Musharraf's In the Line of Fire. Lesson #1: You don't need a 5-star book launch if you can get one in the White House instead. Why, you don't even need to send the author on an expensive book tour either, so long as he's a sitting President, that too of Pakistan. Lesson #2: Don't believe your distributors when they claim Rs 950 is too high for a 360-pager. A month ago, when Simon & Schuster's sales team here began peddling the Pak prez's memoir, distributor response was less than lukewarm. Even Bill Clinton's 1,000-page memoir was cheaper at Rs 895, they said. Look at them now: they're almost doubling the orders within two days of release.

Comparisons between Mush's book and Harry Potter aren't just hype. The Hindi publisher who bought 'Indian' language rights to Potter paid about a...

Pervez Musharraf: In the Line of Fire Books Bibliofile
Advertisement