Lyngdoh's Chronicle of an Impossible Election, Taslima comes to town to launch her banned book in Hindi and New Delhi World Book Fair now competes with London and Frankfurt. 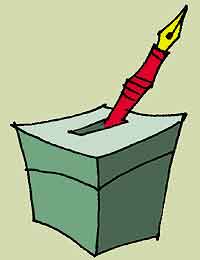 Chief Election Commissioner J.M. Lyngdoh may be packing his bags for his new home in Hyderabad but he won't quite be walking into the sunset. His publishers Penguin are already preparing for publishing his manuscript on his years in the Election Commission. The title, Chronicle of an Impossible Election, obviously refers to the J&K election which Lyngdoh conducted at the beginning of his term. Famous for calling a spade an uncompromising spade, Lyngdoh's book is being billed as Penguin's biggest non-fiction debut of the year. 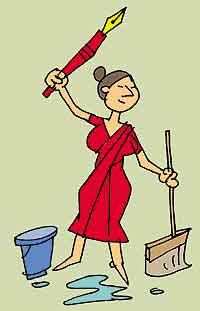 After Salman Rushdie's open secret visit to Mumbai, another famous fugitive from fundamentalist ire, Taslima Nasreen, is determined to give reporters a run for their money. The West Bengal government may have banned her book Dwikhondito (the third volume of her autobiography) but can't refuse her police protection. Nasreen will make an appearance at the Calcutta book fair on February 3 to release not her own story but that of one of India's most unusual authors: Baby Haldar, the maid servant who managed to write her life story in the time she squeezed between jhadu-poncha and cooking for her employers. Haldar won't be going to Calcutta for her launch but she may still get to meet the author who she says inspired her to write. Nasreen is planning to visit Delhi in mid-February to release a Hindi edition of her banned book. 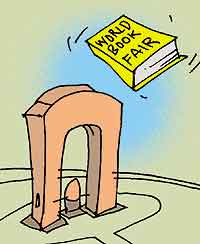 Time was when the Calcutta book fair was the biggest book event in the country. Now, the New Delhi World Book Fair is where publishers from all over the country are heading next month. Over 12,000 publishers will be participating in the mega-event (February 14-22). Not just book sales, the World Book Fair is also a rich hunting ground for international agents and publishers in search of new Indian authors. Many Indian publishers say the Delhi fair has become more important than the Frankfurt and London fairs for selling rights for new books.