What do you say of a film that makes a cracker of a start and then just ends in a disappointing whimper? 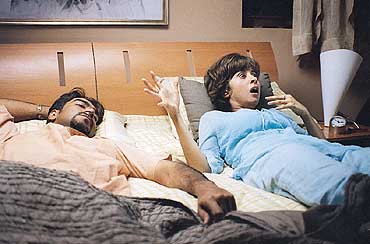 What do you say of a film like Bhoot that makes a cracker of a start and then just ends in a disappointing whimper? A film that tries to discover ingenious ways of telling a spooky story but lets you down by narrating the same stale tale? Bhoot is a lost chance—Varma does lend the hitherto sloppy genre a dash of subtlety and finesse but still manages to lapse into its dominant cliches.

Horror in Bhoot moves out of descrepit havelis to a smart new address—Apartment No. 1201, somewhere in Mumbai. Stock analyst Vishal (Ajay) moves into the flat with wife Swati (Urmila) despite knowing that its previous occupant, a young woman called Manjeet, had jumped to her death. Roman Polanski's The Tenant? Nothing perplexing. Predictable things happen in 1201—Swati starts seeing "Sixth Sense" visions, becomes paranoid, goes sleep-walking and vague-talking. However, the first half does pack in an incipient sense of fear and a lingering menace that makes you "giggle with fear and shiver with pleasure". Varma plays with his viewers' anticipations, manipulates their collective psyche with some dainty stabs of the unexpected. And shows that he is a craftsman in control. He uses some imaginative wide-angle shots and even funkily frames his actors waist-down. The scenes unfold slowly and deliberately, there are long tracks of complete silence and minimal use of dialogue that together create an uncanny mood. Even the everyday traffic, the hip cineplex, the crowded beach and the eccentric housemaid (Seema) can harbour terror. The ominous, afterall, is part of the daily grind.

Sadly, the unsettling elements and stylistic flourishes go totally amiss in the second half as Bhoot gets reduced to just another tale of a spirit seeking retribution. Too many characters—an inspector (Nana), a psychiatrist (Victor) and a clairvoyant (Rekha)—descend on the scene and Varma hurtles mindlessly to the climax. Bhoot could have been much more—a haunting psychological study of a tormented mind perhaps. But even as Swati goes to pieces within her trendy home, you're left wondering how different is Bhoot from a Raat or a Raaz? Or the Ramsays.