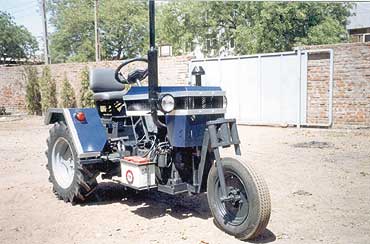 outlookindia.com
-0001-11-30T00:00:00+0553
When Mathukia was trying to build his tractor in the early 1990s, fellow- villagers would laugh at him."I used to experiment with whatever was readily available, the front tyres of a car, rear wheels and gear box of a jeep, a stationary speed diesel engine, and so on." But Mathukia is having the last laugh. His Vanraj has just received a patent in the US. It’s a unique tractor as it is convertible into three wheels from four, and has a variable track width."It can perform almost all functions expected of a large tractor, though on a small scale. Unlike the 24 HP tractor, it doesn’t consume much diesel and is perfectly affordable," says Mathukia. Vanraj may be just the thing for poor farmers with small land holdings.

"I’ve several other innovations up my sleeve," says Mathukia. Innovative designs of check dams, so vital in dry Saurashtra; a modified seed drill; a small bullock-operated pesticide sprayer; a semi-circular check dam-like design for the construction of water storage tanks for household and agricultural use. Recipient of several awards for innovation, member of an Indian delegation invited to South Africa to guide farmers and artisans about new technologies and innovations, Mathukia remains, at heart, a son of the soil. "I will be happy when small farmers benefit from Vanraj," he says.