Sikh UN jawans are humouring the locals. That's till the next battle. 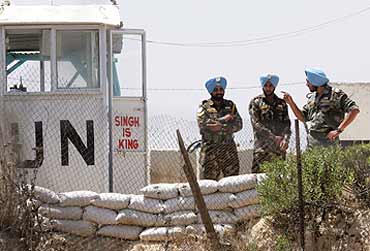 The men of the 15 Punjab Infantry Battalion are some of the most battle-hardened and decorated fighters the Indian army has to offer. But in the two months they have been deployed as part of the United Nations Interim Force in Lebanon (UNIFIL) here in Hezbollah's heartland, a few kilometers north of the Israeli frontier, they haven't exactly been focused on fighting.

"Winning the hearts and minds of the people is very important," says Maj Sumit Sharma, the contingent's spokesman. "We should not be seen as being from outside." So, there is a soldier who teaches yoga to 10-year-olds, a troupe that demonstrates Bhangra to the locals and, perhaps most famously in these parts, Maj Shailendra Choubey, the jovial army veterinarian. 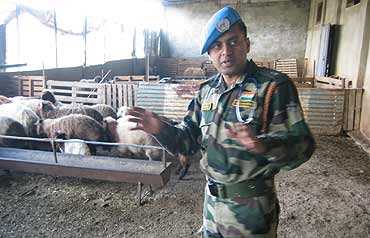 Maj Choubey is the only veterinarian for kilometers around. He does his daily rounds of the countryside, checking up on colicky donkeys, treating cows with mastitis and monitoring expectant sheep. "You must be finding it pretty crazy," Maj Choubey says as he tackles a pregnant sheep to the ground, examines its belly and then jabs a needle into its hindquarters. "But this is what we do."

It won't be what they would do if war returns to the gentle hills and broad valleys of South Lebanon. For 34 days last summer, this area was a battlefield, as Israel and Hezbollah, the Shiite militia, went to war after the latter kidnapped two Israeli soldiers. The toll was devastating: more than 1,200 dead Lebanese, most of them civilians; 159 dead Israelis—120 soldiers and 39 civilians—and an estimated US$2.8 billion in damage to Lebanon's infrastructure.

What's more, India's soldiers (then of the 4 Sikh Regiment) were caught in the crossfire; several Indian soldiers were injured. In the nearby village of Khiam, a UN observation tower came under Israeli artillery fire. Four soldiers—from Austria, Canada, China and Finland—were killed. The men of 4 Sikh were sent in the night to retrieve what was left of their bodies.

South Lebanon has been peaceful since August thanks to a UN-brokered ceasefire, which the Indian soldiers, along with 12,000 UN soldiers from 27 countries, are tasked with enforcing in a 20-km buffer zone that runs along Israel's northern border. The 850 Indian soldiers stationed here now are charged with preventing Hezbollah—or any armed militia—from operating in the vicinity of 12 villages here in the eastern sector of the zone, an area that includes the mountainous border with Syria, an ancient smuggling route. (India has been providing soldiers to the UN force in South Lebanon for 9 years now.)

The villages, olive groves and sheep pastures that stretch from here to the Mediterranean Sea constitute Hezbollah's stronghold. With the end of the Israeli occupation of South Lebanon in 2000, the militia has used this territory to launch countless rocket attacks into Israel. But since December 2006, when 15 Punjab Infantry Battalion arrived, they haven't encountered a single Hezbollah guerilla, missile or weapon that is poised to attack Israel, says Maj Sharma. In fact, with a few exceptions, almost everything UNIFIL has discovered in the buffer zone has been abandoned.

UNIFIL says some 100 patrols conducted by its white armoured personnel carriers and Humvees every day have forced Hezbollah to give up active operations in the buffer zone. "Because we are a deterrent, no armed elements are here," Maj Sharma says.

Nevertheless, there are signs that another war between Israel and Hezbollah may be on the horizon. Hezbollah openly says its fighters have spent the last seven months preparing for another major battle by stockpiling some 33,000 missiles and regrouping their fighters. "We in the resistance have weapons, and we openly declare that we've weapons, that we're completing our preparedness for a greater and more dangerous stage," Hassan Nasrallah, the group's leader, said in a televised address last month. 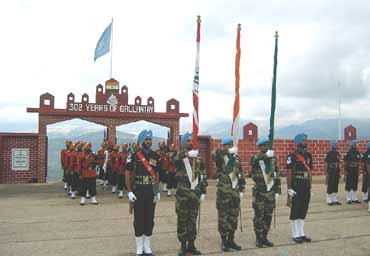 What's more, the Israeli Defence Forces has said in recent weeks it has gathered intelligence that Hezbollah is continuing to smuggle Iran-supplied weapons across the Syrian border and into Lebanon. "It's not a question of if (Israel is going to attack again), it's a question of when," says Amal Saad-Ghorayeb, a Hezbollah expert and visiting fellow at the Carnegie Middle East Center in Beirut. "Definitively, I don't think it's going to happen in five years time. I think it's going to happen quite soon."

If there is another war, the soldiers of 15 Punjab Infantry insist they are ready for anything that comes their way. "My boys have a very good record of gallantry in war," says Col Advitya Madan, the commanding officer, who explains that in its 302-year history 15 Punjab has never backed away from a fight—whether it was defending the Maharaja of Patiala centuries ago, fighting for the British at Gallipoli during World War I or holding off insurgents in Kashmir. "We work on the principle that we expect—and hope for—the best, all the same we are prepared for the worst," Col Madan says. "We are ready. We are well equipped. My boys are very well trained to react."

In addition to the threat of another war between Israel and Hezbollah, there are fears that Sunni Muslim groups affiliated with Al Qaeda may launch an attack on UNIFIL's soldiers. Al Qaeda deputy chief Ayman al-Zawahiri has denounced the entire UNIFIL force. "I'll be really surprised if we get through 2007 without UNIFIL being seriously attacked," says a Western diplomat in Beirut.

However, the huge force of UNIFIL comprises nearly 13,000 soldiers from 27 countries. Most believe that if an Al Qaeda-affiliated group attacks they will strike one of the European contingents—from Spain, Italy or France. "If they're going to strike, they're going to want it to make major headlines all over the world, which is why the European contingents are very concerned," says Timur Goksel, who retired as a senior advisor to UNIFIL in 2003. "All they need to do is shoot one guy and there will be a crisis."

And though the French and Spanish contingents have encountered some minor problems with the local population, who largely support Hezbollah, the Indian soldiers say they haven't had any such difficulties. "We are received with open arms," Maj Sharma says. "At least in the eastern sector, things have been cool." This sentiment was echoed last week in Delhi, where Hezbollah leader Ali Fayyad had come down to attend a seminar. He said, "The role of the Indian army deployed as part of UN peacekeepers in South Lebanon is very positive" and "it has no problem with people and Hezbollah".