The poor remain outside the purview of these attractive indices

It’s hard to say whether it is the central leadership, or of the state, or even other factors, including local activism, that is seeing laggard states like Orissa, Rajasthan and Uttar Pradesh clock over 6 per cent growth in the last five years. It is, however, not an even-handed story.

Though it ranks low in terms of GDP figures, development experts often cite Rajasthan as an example of a state that is utilising government-funded schemes like NREGS to change lives. Of course, this is in large part led by local activism. Similarly, though Madhya Pradesh has slipped, experts lay part of the blame on the vagaries of nature; in fact, the state ranks higher than Bihar in programme implementation. And though Uttar Pradesh shows higher GDP numbers, growth in the state has been asymmetrical—be it in education, agriculture or healthcare.

Also, in most states, the poorest of the poor remain outside the purview of headline-grabbing numbers. In fact, inclusive growth remains elusive in almost all states. Take Punjab, once the fastest-growing state both in terms of agriculture and industry—it has slipped below even troubled Jammu and Kashmir in the last five years.

Clearly, heartening though they may be, GDP growth numbers do not tell the whole story. The real test is the proper implementation of the flagship programmes of the government. Far too many people don’t reap the benefits of high growth. The irony is that the solutions stare one in the face, yet governments refuse to implement them. 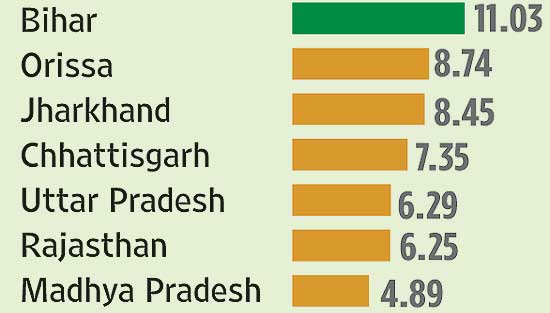