Between Will and Won't 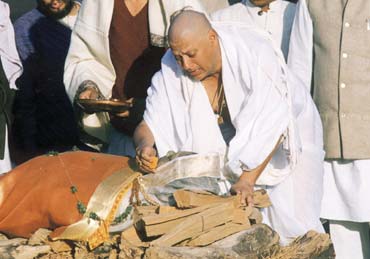 outlookindia.com
-0001-11-30T00:00:00+0553
It's not often that palace intrigue becomes a public duel. But with the Scindias of Gwalior—one of the richest and most powerful of India's former royal houses—it was perhaps waiting to happen. Even before the curtains came down on Act I—which saw the late Rajmata Vijayaraje Scindia, a BJP veteran, disinherit her son and senior Congressman Madhavrao from her estate—a rather quick scripting of the second act started. The Scindia camp claims a second will, written after the one made public last week, exists. Family sources say the second will was signed in the mid-'90s after the Rajmata patched up with her son. This, they believe, can undo the harshness of the earlier will. The will, it's conjectured, is currently with the Scindia sisters and they are using this as a bargaining chip for a larger share in the family wealth.

For the moment, though, Rajmata's first will dated September 20, 1985—which had barred her son from even performing her last rites—continues to embarrass Madhavrao. Says S. Gurumurthy, one of the two executors (the other is the Rajmata's private secretary Sardar Sambaji Rao Angre) of the will: "The Scindia sisters inherit 80 per cent of the property and 20 per cent has been left to a trust. The entire property has been left in a 'common kitty' and it is up to the two executors to divide this." However, Gurumurthy told Outlook: "I have written to Angre that I can't afford the time to act as an executor." Which effectively leaves Angre as the sole executor.

Sardar Angre, however, is not the only one who is delighted. Dr J.K. Jain, of Jain TV fame, who was the Rajmata's protege in the bjp, can also smile. For a long time, the Scindia sisters have been trying to evict him from the premises of the 32-acre Scindia Villa located in south Delhi. But instead of siding with her children, the Rajmata has willed Jain the right to 'continue in the present position which he occupies in the companies/institutions under my ownership or control'. She also waives the dues owed to her by Angre and in addition gifts him two stud farms in Jodhpur. Angre explains: "My wife ran the Rajmata's kitchen so this pertains to the loose change left over."

But few buy this. And Madhavrao, has challenged the will in court. The sisters who had earlier been feuding with the brother have now united with him against the Angre-Jain duo. Scindia's lawyers are invoking the law of primogeniture which enables the eldest son to inherit the estate. According to sources, his defence will centre around the argument that the estate was not the Rajmata's to will away in the first place. The entire legality of the will is in question. Madhavrao was not available for comment though. Says a friend: "He did not abuse his mother when she was alive, he is hardly likely to do so now."

The feud between mother and son is not new. It is partly political, partly personal. And it coincides with Sardar Angre's entry into the Rajmata's life. Sambaji Angre's father, Chandraoji Angre, was the hazoor secretary to Madhavrao's father, Jeevajirao Scindia. Like most of his ancestors, Jeevaji had also been orphaned at an early age and for a while his secretary ran the show. On his 18th birthday, Jeevaji banished both father and son from his court.

For almost 20 years, the Angres were exiled from Gwalior. But the day Jeevaji died—then Madhavrao was only 16 years old—Sambaji Angre returned. And he never left the palace. Madhavrao went to Oxford while Angre, an rss volunteer, persuaded the Rajmata to join the Jana Sangh.

Until then, the Rajmata was with the Congress. However, largely due to differences with the then MP chief minister, D.P. Mishra, she was disillusioned with the party. Almost two chapters of her autobiography Rajpath Se Lokpath Par (From Monarchy to Democracy) are devoted to rubbishing Mishra. Seasoned politicians, however, believe, that the Rajmata was annoyed because the CM didn't allow her to lord it over him as she had done with his predecessors. (An interesting sidelight to the Mishra versus Scindia saga is that when Dr Jain refused to vacate the Scindia villa, it is to D.P. Mishra's son, current principal secretary Brajesh Mishra, that Vasundhara Raje turned for help. This in turn spurred Jain's recent attack on Mishra.)

Once in the Jana Sangh, Vijayaraje and Angre were harassed by Indira Gandhi during the Emergency. Madhavrao, who was in Nepal with his in-laws, asked his mother to join him. "My son's concern for my protection made me very happy," wrote Rajmata in her book. But Angre, who was not as touched, accused Madhavrao of being a coward. Interestingly, Vijayaraje echoes Angre's words in attacking her son in her will.

Angre's influence over the Rajmata strengthened as Scindia joined the Congress. This drew her closer to the Angres. The Hiranvan Mahal, which is located on the Gwalior palace grounds, was renovated for them. Family sources say when the Rajmata was imprisoned during the Emergency, Angre's wife raided Jai Vilas, Madhavrao's residence, and ripped apart gold-plated taps, chandeliers, carpets etc to decorate her house. Later, when the Congress government came to power, Madhavrao tried to recover his property. Recalls a family source: "When Scindia's men went to raid Hiranvan, the Angres set their Rottweiler on them. So they shot the dog."

It was against this backdrop that the Rajmata wrote her will in September 1985. Indira Gandhi's assassination had swept the Congress to power while the bjp won only two seats. Vijayaraje herself had contested the 1980 election against Indira Gandhi from Rae Bareli and lost. She was at her lowest ebb because her son had joined hands with those who sent her to jail.

However, during the 1990s, mother and son patched up. Scindia's sisters Yashodhara and Vasundhara (the third sister Usharaje is married and settled in Nepal) had also become wary of their 'Uncle' Angre. And when Madhavrao married his children, their grandmother was present to bless them. She, however, returned from her grand-daughter's wedding and issued a statement against 'lavish expenditure'.

But all this is part of the politics which has governed Scindia family relations. The late Rajmata's current will gives the bjp a distinct advantage over the Congress. As for the Scindia heirs, it remains to be seen if their hatred for the Angre-Jain duo is strong enough to bring them (the sisters and the brother) together and produce the second will which almost everyone is certain exists.