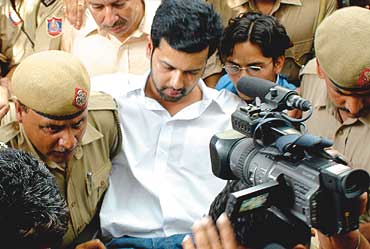 9:10 pm Vivek rings up Sahil Zaroo on his mobile and invites him over

10:50 pm Rahul Mahajan hands over Rs 15,000 to Moitra, who passes it on to Sahil to buy cocaine. Sahil and his friends are driven by Mahajan’s driver. Five packets of drugs are bought from Abdullah, A Nigerian, for Rs 12,500.

11:45 pm Sahil and Karan return to Rahul Mahajan’s house. Three packets of cocaine, heavily laced with heroin, are snorted by Moitra, Rahul and Sahil. Rahul says the cocaine is suspect and should be replaced.

12:30 pm Sahil makes a call and takes the two unopened packets back to Abdullah. On the way Karan gets dropped at his home.

1:30 pm Sahil returns with another friend Trishay and five fresh packets of cocaine. They find Vivek and Rahul unconscious. The servants are woken up. They call Pramod Mahajan’s former secretary Harish Sharma, who directs them to rush the two to Apollo Hospital and clean up the mess. Sahil and Trishay leave the house.

2:50 am Vivek and Rahul are brought to Apollo Hospital where the former is declared dead. Initially, Apollo’s Dr Anupam Sibal says no trace of any drugs was found in Rahul’s blood tests. The next day the hospital backtracks. 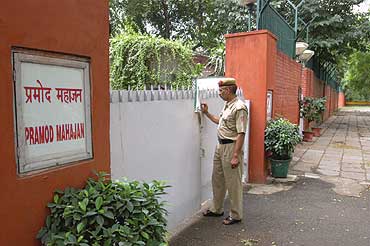 Those who called on Rahul Mahajan and Vivek Moitra at 7, Safdarjung Road on the evening of June 1 had no inkling of the surreal events that were to follow. Moitra, the slain BJP leader Pramod Mahajan's most trusted secretary, was plotting Rahul's political career. He made calls to senior BJP leaders and the party's Assam unit because Pramod Mahajan's ashes were to be immersed in the Brahmaputra. He and Rahul were to leave for Guwahati the following day. But suddenly, events took a bizarre turn. Police officers investigating the case told Outlook that a visitor came by bearing some good news. "It was reason enough for them to celebrate. They were extremely happy about something," the officer reveals. So, out came the champagne bottles.

But that's where the good news ended. Soon, things started to go badly. After the bubbly, the two decided to round off the evening with a few lines of cocaine. The drug that was procured for them turned out to be heavily adulterated with heroin. After a few snorts, Rahul Mahajan and Vivek Moitra passed out and were rushed to Indraprastha Apollo hospital. Rahul was admitted in an unconscious state with a falling pulse rate. Vivek Moitra was declared dead on arrival. The quiet celebration had gone horribly wrong. Rahul has been booked under the NDPS Act and sent to judicial custody till June 22, for consumption and distribution of drugs, and allowing his house to be used for consumption of drugs.

Ever since the incident hit the headlines, various theories have been put forward. To confuse matters further was the cover-up by Apollo Hospital which made public a test report showing that Rahul's blood and urine samples showed no traces of drugs. The hospital was eventually caught out.

To get some clarity on what transpired on the night of June 1 and the direction the case is headed, Outlook spoke to investigators, doctors and others handling the case. Here are some pieces of the jigsaw:

Cocaine: Who asked for it that evening?

Both, Rahul Mahajan and Vivek Moitra were regular cocaine users. According to the police, it is difficult to say whose idea it was to snort a few lines since Moitra is dead, and Rahul has been denying that he ever took drugs. His version of what happened on June 1 is that he had "too much of sparkling wine and had passed out". He says he is ignorant of what transpired subsequently. As for his losing consciousness, Rahul has told his interrogators that "somebody may have mixed something" in his drink. Rahul has put the entire blame on Vivek Moitra. It was indeed the latter who called Sahil Zaroo and the other three young men, all in their early 20s. It was Sahil who procured the 'cocaine' from a Nigerian drug dealer. While Rahul pleads ignorance, the testimonies of Sahil and the others clearly speaks of the young Mahajan snorting cocaine. But according to the police, the call to Sahil was certainly made by Vivek.

Sahil Zaroo, a young Kashmiri, who passed out from St Xavier's College in Mumbai, was well known to Vivek. He had been supplying coke to him on a regular basis. Those in Vivek's age-group and position who do drugs often depend on young friends to "score" for them as they don't wish to be seen with pushers. Sahil had met Vivek at a party in Mumbai and become friends.

When Vivek called Sahil on June 1, he turned up at the Safdarjung Road house with friends Rahul Malhotra and Karan Ahuja. He had promised to introduce them to powerful people. They were received by Vivek. This was the conversation, reconstructed by one of the interrogators, that followed:

Vivek: Beta, I am glad you could make it. We are just having a little party here.

(He then introduced them to Rahul Mahajan who was in the jacuzzi sipping champagne).

Vivek: This is Sahil. He is very resourceful and can arrange for the stuff in a jiffy. And this is Rahul, he is going to be a powerful man, just wait and see.

Rahul: Let's see. Just give him the money. (To Sahil) Get us some good stuff. (The three young men prepare to leave)

Sahil: These guys have gone mad. They want stuff immediately. We will have to go and get it.

Sahil picked up what he thought was five packets of cocaine for Rs 12,500 and came back to Mahajan's house. The drug was packed in translucent paper. Three packets were opened and Rahul, Vivek and Sahil snorted the drug. Rahul found the quality dubious and asked Sahil to return the remaining two packets and get better "stuff". Sahil took the two unopened packets and left with Karan, who too dropped out on the way. Sahil returned with five fresh packets, having picked up another friend Trishay on the way.

When they came into the house, they found Vivek frothing at the mouth and Rahul in an unconscious state. They alerted the servants and left in a hurry. Sahil too was feeling unwell and vomited in the driveway. He went to the Spring Meadow hospital in Kailash Colony, took an antacid shot and left the hospital against medical advice. He took the first flight out of Delhi to Srinagar. Rahul and Vivek were rushed to Apollo Hospital on the instructions of Harish Sharma, another trusted aide of Pramod Mahajan. 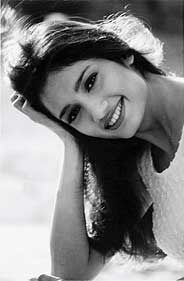 Adding a little personal twist to the grim saga, Rahul's close friend Captain Shweta Singh, a pilot with Jet Airways, visited him at the hospital. Police spoke to Shweta on June 2. The late Pramod Mahajan had introduced her to friends as his adopted daughter. Shweta's father confirmed to the police that the couple were moving towards a formal engagement.

Sahil later surrendered to the police and has been taken to Srinagar by a Delhi Police team to recover his cell phone. He revealed during interrogation that he had hidden his cell phone somewhere near the Dal Lake. As for the five packets of 'cocaine', he claims he threw them on the lawn of 7, Safdarjung Road. The police have given a clean chit to Rahul Malhotra, Karan and Trishay and plan to make them the prosecution witnesses in the case against Mahajan. Their testimonies will have an extremely important bearing in the absence of any material evidence.

It was only after a series of pathological tests, conducted by three different labs, that the investigators concluded that it was not just cocaine which Vivek and Rahul had consumed. A combination of cocaine, heroin, morphine and alcohol had done the damage. Heroin was also found in the tests conducted on Sahil's vomit. Vivek's death has been attributed to heroin overdose, a drug he was not used to.

According to the police, Abdullah, a Nigerian peddler, had sold Sahil cocaine adulterated with heroin. Heroin sells at less than Rs 500 a gram and is far cheaper than cocaine. Abdullah has admitted to his interrogators that he had given Sahil adulterated coke, but he did not expect it to be fatal.

A routine blood and urine test assumed great significance after Apollo Hospital gave a clean chit to Rahul Mahajan. It said the tests had not shown any signs of cocaine or heroin. Apollo Hospital's medical director, Dr Anupam Sibal, addressed a press conference claiming that they had tested Rahul for 12 psychotropic substances, and found the presence of none. However, these findings were refuted the next day by Dr Lal's Pathological Labs, an independent testing lab, which confirmed the presence of both heroin and cocaine. 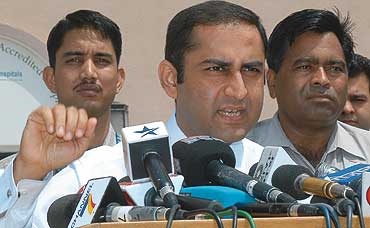 Apollo insiders claim that it is nothing new for the hospital to oblige the rich and the powerful. Sources said Dr Sibal was in constant touch with Apollo Hospital chairman, Dr Pratap Reddy. In fact, Dr Sibal, who was in London, was specially recalled to handle the situation. The police have interrogated eight doctors from Apollo. "We have so far interrogated them on the line of treatment that was given to Rahul Mahajan. Our next step is to go through internal records and reports of the hospital," additional DCP Manish Kumar Agrawal, heading the police probe, told Outlook. The sessions court has given the go-ahead to the police to register a case against Apollo Hospital for suppressing evidence.

Police Probe—How Strong is their Case?

The police have registered a case under sections 21 (possession, sale and purchase of drugs), Section 25 (allowing one's premises to be used for consumption drugs), Section 27 (consumption of drugs), and Section 29 (conspiracy and abetment) of the NDPS Act. But the evidence they have got till now could be too thin. Legal experts say the police may have managed to arrest Rahul Mahajan but they have doubts about the case ending in a conviction.

According to eminent lawyer Ramesh Gupta, who specialises in dealing with NDPS cases, the police do not have material evidence. It has not recovered either cocaine or heroin on its own. The only substance which the police has in its possession was handed over to them by Apollo Hospital doctors. "They are not even sure of the quantity. To enforce Section 21, they need to show at least five grams of heroin or two grams of cocaine. At the moment they only have evidence to show that Rahul had consumed drugs and it happened in his house. Both these offenses are bailable," says Gupta. For now, the police believe that Vivek's death and Rahul Mahajan's illness was due to a heroin overdose.

So what next? The focus of the police effort is to recover the five packets of the white powder which Sahil claims he threw on the lawns outside the Mahajan residence. If that does not happen, Rahul will be out on bail soon. But as of now, it's a fortnight in jail for him.

The Custodian Of Conscience