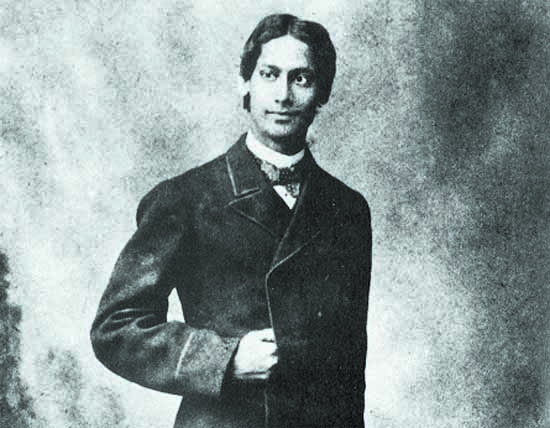 Early in his study of the young Rabindranath Tagore, Sudhir Kakar quotes Rilke on Rodin: “It’s like holding a cup beneath a waterfall.” The waterfall is an unconsciously apposite image, given the way in which the overflowing spring is used by Tagore himself to represent an epipha­nic moment in his early adulthood, when he com­posed the poem The Fountain Awa­kes (Nirjharer Swapnabhanga). For Kakar, who comes to Tagore not through long familiarity but through puzzlement and mistrust, understanding Tagore’s gen­­ius constitutes a process of self-­ana­lysis, as though he too had shared, at some point, in that epiphany. His book, constructed as a psychobiography of the young Tagore that excavates the springs of his genius, is therefore, above all, a sympathetic reading of the poet’s rec­ol­lections of childhood and youth, and his authorial testimony. Unburdened by the apparatus of formal psychoanalysis, it offers an account of Tagore’s early childhood, adolescence and young adulthood with which most readers will concur.

Kakar begins by making an important point about Tagore’s account of his mother’s death in his Reminiscences, where he seems a very young child, not the fourteen-year-old adolescent that he actually was. This “disturbance of memory” provides the occasion for a sensitive and nuanced reading of Tagore’s childhood, his separation from his mother and exile into a region ruled over by the household servants. “In Rabi’s psyche”, Kakar says, “his mother had died eight years earlier with his exile into the servants’ quarters.” Whether or not we accept this reading, Kakar’s examination of the inside-outside dichotomy in the young Tagore, and his effort to relate this to the spatial and domestic arrangements of the Jorasanko house, is careful and persuasive. Like Sabyasachi Bhattacharya in a recent biography, Kakar too is convinced of the essential solitariness of Tagore’s heart, a source of imaginative strength, but also of deep melancholy and depression. Tracing the sources of that solitude, and of deep feelings of abandonment, to the poet’s early childhood reveals nothing that is not known to Tagore’s biographers. Nevertheless, it is worth having Kakar’s sympathetic account of this period and of Tagore’s adolescence and young adulthood.

Expectedly, Kakar focuses considerable attention on the figure of Tagore’s sister-in-law Kadambari, his first love and poetic muse. Her suicide, when the poet was 23 and had been married for just four months, represents for Kakar “the falling of the shadow” that was to extend itself over his entire poetic life. The Tagore family, of course, took care to expunge her memory as far as possible. Kakar notes the entry in the family account-book: “Expenses towards suppressing the news of the death to the press: Rs 52”. Mourning becomes for Rabi a private, guilt-ridden, yet recuperative act. More discussion of this constituent of his later work, rather than the relativ­ely conventional analysis of the novella Nashtaneer (filmed by Satyajit Ray as Charulata), which was clearly based on this episode, would have been welcome.

Kakar devotes his penultimate chapter to Tagore’s paintings—a perplexing cho­ice since he became a painter in his sixt­ies, and Kakar’s stated focus is on the young poet. Given that this book does not attempt a psychoanalytical study of Tagore’s vast written corpus, the paintings might have seemed more directly accessible to analysis. In Kakar’s reading, the famous doodles and crossings-out bec­ome a form of erasure that produces figures buried in the unconscious, and the dead Kadambari returns in Tagore’s portraits of women. The paintings represent “the melancholy of the loss of a vitally important relationship that was marked by some ambivalence, where the mourning also has a strain of guilt and perhaps also bitterness at being abandoned”.

The book’s brevity is refreshing: it app­ears a set of meditations by a thoughtful reader on what Tagore means to him. The title is misleading, for though, like the late Rituparno Ghosh in his last documentary, Kakar focuses more on Tag­ore’s childhood and adolescence, he makes them a lens through which to view the poet as a whole. The book then is not about the ‘young Tagore’ in the sense that we speak of the ‘young Hegel’, or the ‘young Marx’, or the ‘young Wittgenstein’, thinkers who undergo separate early and late phases. Rather, the young Tagore, like the young Wordsworth, becomes the psychobiographical site where the deepest sources of imagination, joy and suffering can be located. For any psy­cho­analyst, this is a gift.