Forget the woman power spiel, ultimately this is a rosy fairy tale. 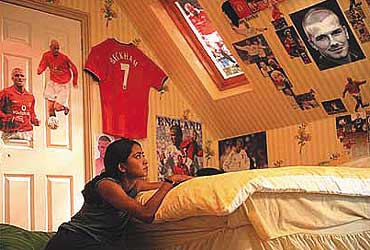 Don't go for Bend It Like Beckham expecting an incisive analysis of Girl Power, of generation gap or of the East-West clash. It's just another feel-good, Coke 'n popcorn flick. Jess (Nagra) idolises Beckham and plays football like one of the boys. Her mother wants her to make round chapattis, dal and aloo gobi, and get married. A similar tale unfolds in a lower-middle-class English household where Jules' (Knightley) mom wants her to keep off sports 'coz "Sporty Spice is the only one without a fella". The film caricaturises every character, save the lead players and their sympathisers, in the most obvious manner. The one-liners on push-up bras and mosquito-bite breasts are puerile and irritating. And so is the parade of big-bosomed Punjabi aunties. Bend it... lacks originality, it's a hollow world of cliches and stereotypes you've seen so often before. There's even the shaadi video a la Monsoon Wedding, complete with a horny sardar. Curiously BILB also reminds one of DDLJ. The Irish coach Joe's (Rhys Meyers) attempts to make Jess's father (Kher) see reason is quite like SRK's interaction with Amrish Puri: gentle and non-confrontational. Forget the woman power spiel, ultimately this is a rosy fairytale: if you are a Ms Ordinary and the coach is as dishy as Joe, just play it. There could be a kiss waiting for you at the end of the game.