Not just its look, the Chinese capital is also sprucing up its vocab for Olympics 2008 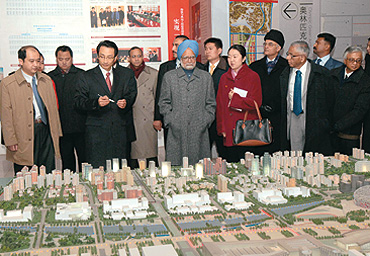 outlookindia.com
-0001-11-30T00:00:00+0553
When a slightly battered Air-India jet carrying Dr Manmohan Singh and his entourage landed in Beijing in the early morning light of a freezingly cold day, it found itself in a gleaming, frankly aspirational city, going vertical by knocking down old buildings and erecting skyscrapers in their place. Its sights are firmly fixed on the 17-day 2008 Olympics, expected to bring in about 5,50,000 people. Can a visiting premier do anything but submit? Hours into his arrival, Prime Minister Manmohan Singh was trotted off to look at Beijing's latest pride and joy—models of the main sports venues in the Olympics village. And he earned himself substantial newspaper column inches for his well-chosen words of praise.

Parts of downtown Beijing are now so slick, it feels unreal—there is no sense of being in the populous capital of a developing country. Singapore-like, Beijing is now trying to dissuade its citizens from spitting on the road to Olympic glory. The Olympics slogan—One World, One Dream—is plastered everywhere. Most interestingly, while you can probably get knock-offs of every designer label that exists in the world in Beijing's shopping centres, you can't get knock-offs of Olympics merchandise. The iron will of the state has prevailed here. The rush to learn Olympics English, as it is actually called, is unbelievable. A training manual Outlook picked up contained Olympics "warm-up" vocabulary with Chinese translations of essential Olympics English words and phrases like 'accreditation', 'jetlag', 'shuttlebus', 'one-two-three-cheese', and, "Excuse me, where can we grab a couple of beers?"

A Lukewarm Cup Of Tea