Beauty Won’t Save The World 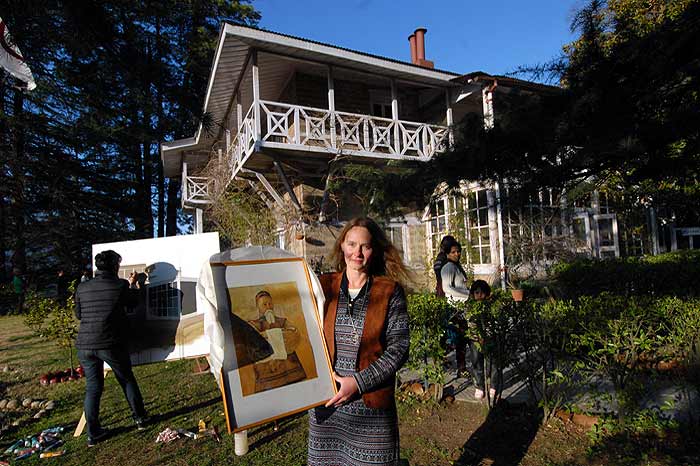 It’s spring in Kullu, and the camellia bushes are thick with dark pink blooms in Nicholas Roerich’s beloved garden in the village of Naggar, Himachal Pradesh. A group of painters has set up easels here, and the spectacular snow-capped mountains in the distance are taking shape on them. Children are coming up the mountain path to the Roerich home, tourists are clicking pictures. Amidst all this, the great Russian painter’s ashes lie buried under a samadhi in a quiet corner of the cedar-dotted estate. It’s a charming scene, but one that provides no hint of the trouble brewing in Roerich’s Indian paradise: a bitter battle, no less, between the Russians, led by their ambassador in India,  and the Himachal Pradesh government, over Roerich’s legacy.

Roerich, who died in 1947, wasn’t just a renowned painter but also a philosopher, scientist and explorer who, at the end of his Central Asian expedition in 1928, made Naggar his home. It is here that he and his elder son George Roerich collated the ethnographical and archaeological material gathered during the expedition and set up Urusvati, a Himalayan research institute, besides producing some 7,000 paintings of the Himalayas. And it was in Naggar that the senior Roerich conceived what was later to be known as the Roerich Pact (the basis for the Hague International Convention for Protection of Cultural Values in the Event of Armed Conflict), declaring all treasures of culture and art inviolable. It was here, too, that Roerich designed the Banner of Peace that today flies above many cultural and educational institutions across the world. 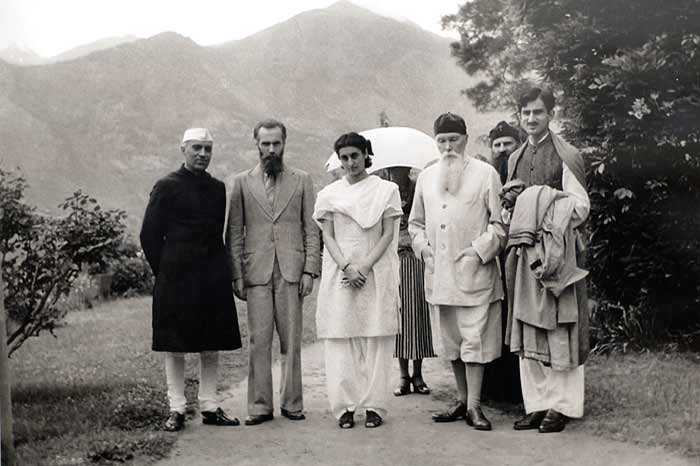 Nehru and Indira Gandhi with the Roerichs in 1947

In 1993, a year before she died, the legendary actress Devika Rani, who was married to Roerich’s younger son, Svetoslav, set up the International Roerich Memorial Trust (IRMT), comprising people from Russia and India, to preserve and extend the work done by the Roerich family. But nearly two decades later, this trust, headed by the Himachal Pradesh chief minister, and with the Russian ambassador as vice-president, has been torn by controversy.

It all came to a head last month, when, acting on a complaint of financial bungling and mismanagement by S.S. Chandel, a lifetime trustee of the IRMT and a retired tourism director of Himachal Pradesh, the chief minister ordered an inquiry. Chandel had submitted detailed charges against the trust’s curator and executive director, Alena Adamkova, a Slovak national who, in the last decade or so, is widely credited with transforming the once-obscure village of Naggar and the IRMT into a cultural and creative hub. In January, the Russian government honoured Adamkova, a specialist in Indian studies, with the Order of Friendship, its highest decoration for foreign citizens. This prompted Chandel to write to the Russian ambassador saying, “If the award has been given to Ms Adamkova to strengthen Indo-Russian friendly ties, then I must say that she has tried to ruin that very spirit and spread disaffection....”

The Russians have reacted with fury. At the March 5 meeting of the trust’s executive committee, Russian ambassador A.M. Kadakin, through his senior counsellor, “registered the Russian side’s serious concern and objection to the actions of Mr Chandel”, and also sought his expulsion from the IRMT. Making it clear that they would not “tolerate such provocations”, the Russians have said: “We consider such insinuations as an open insult to Russia and its head of state.”

Chandel has objected, among other things, to foreign donations being received by Alena from the Friends of IRMT in Russia, and alleged the misuse of Rs 2 crore in central government funds pledged by former prime minister A.B. Vajpayee for setting up an International Art Academy at Naggar (at an overall estimated cost of Rs 8 crore). According to Alena, the first tranche of Rs 1 crore, which came in 2001, was spent on repairing dilapidated buildings such as the Urusvati Folk Art Museum and Roerich’s old house. Of the second tranche of Rs 1 crore, received in 2003, around Rs 28 lakh was spent on making building plans for the proposed academy, and more repairs. And then, as Alena points out, “Mr Vajpayee went out of office and the project was put on the shelf. Since then, the remaining money is lying unspent in a fixed deposit and in the absence of any financial help from the state government, we are struggling to run the place on collections from entry tickets and souvenir sales, and also by persuading my friends in Russia to contribute (in kind) towards the activities here.”

Even her worst critics—district administrative officials with whom she’s had several tiffs—grudgingly admit Alena has put life back into the place. This is visible, too. A decade ago, the IRMT was a sleepy, dilapidated place, but today its calendar is chock-a-bloc with artistic and cultural activities. Painting camps, symposiums, exhibitions and cultural performances take place round the year. When the International Art Academy project got bogged down, Alena started the modest Helena Roerich College for the Arts on the estate, with 120 students from neighbouring villages. In 2007, four students from the college were sent to Russia, where they performed at three cities. Alena has also contributed to the Kullu Dussehra celebrations by bringing in dance troupes from Russia and Kazakhstan, and in 2004, she rescued 52 ‘barselas’ or memorial stones, 1,000-year-old artifacts of the Kullu rajas, lying dumped in a village ground. (Later taken over by the asi, they are still kept on the Roerich estate.) 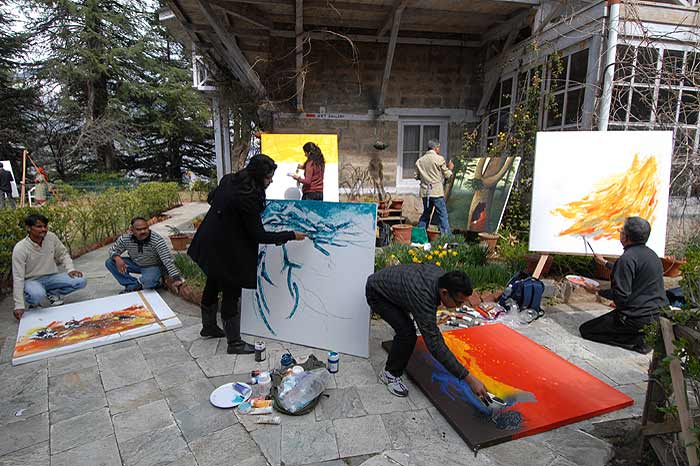 For Chandel, however, Alena is, as he bluntly told Outlook, a “rude and manipulative woman, lacking in basic decorum”. He lashed out at her for being corrupt and high-handed. Retaliating, Sergie Karmalito, senior counsellor at the Russian embassy, says: “Mr Chandel would like to instal his daughter (who has studied at Moscow) as the curator in place of Alena, and his campaign to defame her is part of that strategy. He is passing judgements on the activities of the trust when he has not even visited the place for the last four years.”

It’s not just Chandel who wants Alena out. Clearly, from what state officials say, the state government, too, would like to see her exit for engineering an administrative takeover of the trust. In fact, in 2006, the then principal secretary (culture) of the state wrote to the chief minister, recommending that her powers as executive director be curtailed and the management be handed over to an officer of the district administration. Consequently, her powers were restricted, but the redoubtable Alena found novel ways to keep at her task, seeking help from the scores of Roerich Societies across the world and friends of IRMT in Russia.

However, support for her comes not just from the Russians, but other trustees too; even, significantly, one belonging to the BJP, whose government rules Himachal Pradesh. Sudheendra Kulkarni, senior BJP leader and lifetime trustee of IRMT, told Outlook, “The allegations are baseless, and are meant to divert the attention from the good work IRMT has done in recent years against many odds. There is no one more deeply committed to, and more knowledgeable about, the Roerich legacy than Alena Adamkova.” He said it was because of her that the trust had brought out many fine publications—an  activity that had come to standstill before her arrival.

In Himachal bureaucratic circles, this praise does not go down well. Says one official, “Though she is doing a good job, the trust belongs to both India and Russia, it is registered in Himachal Pradesh, and it is the responsibility of the state government to keep an eye on its activities.” Chandel, meanwhile, says he is preparing to move the courts to take the battle to its logical conclusion. A priceless Indo-Russian legacy is in danger of being ripped apart.

D6 And All That Gas