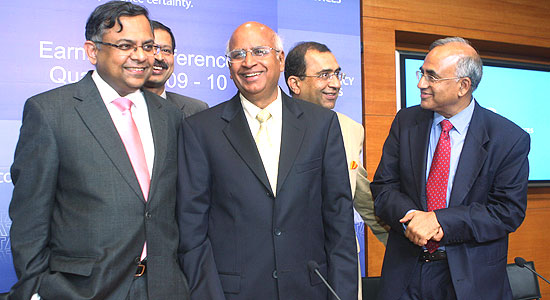 What’s behind the good corporate showing?

Is there demand in the market?

There has been a demand revival for consumer goods and real estate—this should spread cheer in the ancillary industries. Rural demand remains strong, but monsoons are a worry.

Is this a short-term phenomenon?

With most sectors showing good growth, next quarter is expected to be better. But some feel India Inc won’t be out of the woods until sales show a strong, sustained pick-up.

Which sectors are moving fast?

Steel, cement, auto and FMCG are showing signs of growth. But the outlook remains uncertain for export-led industries, petroleum and capital goods.

The corporate big boys are smiling again. Against the general expectations a middling graph for the first quarter of 2009-10, many companies have turned out impressive performances, clocking big double-digit growths in net profit. Among the bse 500, the first quarter results declared of over 160 companies show that profits have grown by an impressive 16 per cent. And this, after accounting for losses from biggies in the petroleum and commodities sectors. It’s been a bit of a bolt from the blue for everyone. Which is why the big question: are these Q1 results a true indication of the well-being of the corporate sector? Is it sustainable?

Over the last few months, corporate India has had just one obsession—to ruthlessly cut costs. This was done by a drastic reduction in manpower in many sectors, coupled with cutting down on operating costs. Divisions have been shut down, plans have been shelved. Some of this was necessary, and natural. As a corporate-watcher put it, “Indian firms have always kept a tight rein on the khata (ledger).” Many companies have also benefited from one-time gains, be it from the foreign exchange transactions (the US dollar fell drastically from last year’s level of Rs 50) and the sale of divisions.

Also, commodity and raw material prices—riding high last year—have moderated, making the job of companies easier. Amitabh Chakraborty, president (equity), Religare Capital, says, “With commodity prices down, most companies are on re-stocking mode.” It certainly helps that inflation is benign at the moment (though there are fears this will change later on in the year) and commodity prices remain down.

The stimulus packages announced by the government are another key factor. The packages reduced excise duty and service tax in a large number of areas. This, coupled with reduced interest rates, gave significant relief to companies. “The government didn’t put any pressure on these companies to pass on the benefit to the end user, so we saw a margin expansion,” explains Raamdeo Agrawal, director, Motilal Oswal Securities. Which explains some of the confidence in corporate India. “The fiscal stimulus has worked...I think I am fairly confident the improved earnings will continue,” says Adi Godrej, chairman, Godrej Consumer Products.

But if the gains have largely come from cost-cutting and a little help from the government, then it’s still no clear indicator of demand-led growth. “A preliminary analysis reveals that net sales have continued to decelerate in the first quarter,” warns a report by securities trading firm Nomura. In fact, there is mixed opinion on the revival of demand. Many analysts feel “companies may have seen the worst already”—a feeling mirrored in the Reserve Bank’s upbeat business expectation survey for the July-September quarter.

What is giving analysts and companies this long-term optimism is the return of demand, especially in rural areas. Says Mahesh Vyas, MD & CEO, CMIE: “There has been a resurgence of demand leading to a sales growth for companies.” Vyas avers that the last two quarters have been just a blip with people holding back purchases. With demand coming back, the market is coming back to normal, he feels.

Indeed, over the past nine months or so, rural demand has kept India Inc afloat. Now, the worry is that the monsoon may play truant. As of now, it looks like it will be rather deficient in parts of the country. That’s a big worry. As Anand Mahindra said in a recent TV interview, “Like all good Indians, it’s time to pray” on this count.

There is, of course, some good news from the real estate sector, which has been in the doldrums for several months. With the government focusing on construction and housing, realty has already started looking up. The first industries to reap the benefit of this are cement, steel and commercial vehicles. This was visible in the larger-than-life performance of leading companies in these sectors. ACC, India’s largest cement firm, clocked an 85 per cent increase in net profits. But then, almost on cue, behemoth Tata Steel reported a worse-than-expected 47 per cent drop in Q1 profits thanks to lower prices—but metal sales did rise by 22 per cent in the quarter.

A lot depends now on how quickly several pending projects get a relook. According to CMIE’s Vyas, around Rs 5.6 lakh crore worth of investments are to be commissioned during 2009-10, which will create new capacities and employment, in return pushing demand. As always, business sentiment will drive that decision to push ahead with investments (but for now, it’s too early to say for a battle-scarred corporate India).

It’s understandable if companies are cautious. After all, there’s been a bloodbath in the commodities and petroleum space. In services too, demand has not really picked up. “We don’t think we are completely out of the woods yet,” adds Suresh Senapaty, ED and CFO, Wipro Ltd, which clocked a 12 per cent gain in Q1 profits. India’s largest IT services company, TCS, also showed good profits.

For an industry expecting flat growth in the current and the coming few quarters, this is great news. Wipro, for instance, has looked at India and West Asia and diversified its business to stay in profits. Says Senapaty: “We are seeing an increasing level of customer engagement from the earlier freeze mode.”

The real test for India Inc lies ahead. A lot depends on the coming months, which normally bring in high volumes for companies. It’s not yet time to uncork the bubbly.

By Arindam Mukherjee and Arti Sharma

From The Machan Up There