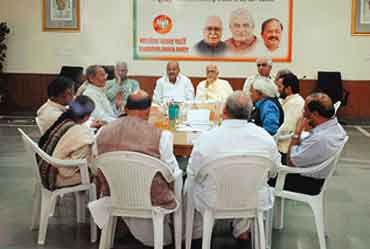 outlookindia.com
-0001-11-30T00:00:00+0553
The wannabe and real 'skinheads' in the BJP have, ironically, become symbols of the acute discomfiture the party is undergoing at this moment of crisis for Hindutva forces. Even as "foreigner" Sonia Gandhi handled the big moment with grace and dignity, the two "bharatiya naris" of the BJP, Sushma Swaraj and Uma Bharati, in a me-first haste to hog the limelight, only ended up looking foolish, heightening its embarrassment. As the Congress and its allies moved towards government formation, the ladies of the BJP—objects of some mirth, as members of what critics rechristened as the 'Bharatiya Mundan Party'— kept up a political burlesque on the side where they competed for stakes that seemed sublimely ridiculous.

First act was Sushma Swaraj's. She promised to tonsure her head, don white robes, sleep on the floor and eat roasted gram if Sonia became PM. If the big-bindied, arch exemplar of the Indian 'housewife' image threatened to play widow, could the original sadhvi of the BJP be far behind? She came charging to Delhi from Bhopal, handed her resignation as Madhya Pradesh chief minister to BJP president Venkaiah Naidu and called a press conference to say she was off to Kedarnath and Badrinath. While there were sniggers that the temperamental Uma Bharati was just looking for some publicity and a brief vacation, there was relief that at least she had not threatened to tonsure her head. The nation had after all been subjected to the sight of a bald Uma Bharati immediately after she won the assembly polls. More recently, Venkaiah Naidu had emerged with a gleaming pate after donating his locks at Tirupati. Remarks a senior BJP leader: "I wish people in our party would understand that shaving off their heads is not a good idea in the age of 24-hour news channels."

The only saving grace about the prospective mundan ceremonies was that they provided some comic relief in what was otherwise a dark hour for the BJP and the Sangh parivar. The party has not only been rejected by the electorate, all its larger-than-life characters have fallen by the wayside. More crucially, for an ideology-driven party, the years of BJP rule had facilitated Sangh cornershops all over the Indian hinterland. Now, the panic buttons have been pressed as it is certain that Sangh outfits that had been fattening themselves on government largesse, will face hard times. Overnight, various low-level Sangh operators find themselves unemployed.

The BJP, meanwhile, is reeling under the shock of a double defeat: the political defeat in the general elections and the moral defeat administered by Sonia Gandhi's grand act of saying no. Even in the face of losing power, a section of the party thought it had a readymade issue in Sonia's foreign origin. Naidu, for instance, went full throttle: "Terrible is the alternative in Sonia as PM." Uma went to the extent of promising "a second war of independence". But eventually, Sonia did not merely knock the wind out of the BJP's sails, she actually clipped the sails too. Even Sushma had to grudgingly say, "My respect for Sonia has gone up."

The BJP has always been a party with two distinct faces: there are the 'bhajan mandali' types like Uma Bharati and then there are the strategic thinkers like L.K. Advani and Arun Jaitley. Unfortunately for the party, the organisation-man Advani appeared to have been dumbstruck by the verdict—particularly as he is believed to be directly responsible for many of the political miscalculations on the road to defeat. Though his staff insists that Advani has been meeting a string of partymen at his Prithviraj Road residence and quietly taking stock of the defeat, other senior BJP veterans say that Advani has lost control of the party. They are praying that this is a temporary lapse on the part of the usually alert BJP strongman.

Yet, there is a larger crisis confronting the BJP: even if Advani takes command of the BJP now, he will be 83 years old by the time the next general election takes place. "We really have to start thinking of a future without Vajpayee or Advani," says a party general secretary. But the so-called second rung have also had the ground move under their feet. Voices of dissent against Venkaiah are getting louder by the day. He is being accused of trying to project himself as a mass leader instead of concentrating on the organisation, traditionally the priority area for a BJP president. Many in the party believe Advani should be both leader of the Opposition and party president, but this is an unlikely prospect as the BJP usually adheres to the principle of one man-one post.

But it is Pramod Mahajan, the BJP's quintessential new-age leader, who has perhaps been hit the hardest. Terse and white-faced, Mahajan says: "If I knew why we've fared so badly, I wouldn't have allowed it to happen." As the man directly responsible for the BJP's ad campaign and its strategy for UP (where the party faced a near-rout), Mahajan's stock has hit an all time low. Yet, in all fairness to him and his laptop-savvy boys, he was asked to deliver the toughest state. And Mahajan's hi-tech campaign eventually came to naught in the caste labyrinths of UP. Mahajan is now expected to retreat to his Mumbai home. He'll devote all his energies to redeem his reputation in his home state Maharashtra, where assembly polls are due later this year.

Arun Jaitley, on the other hand, was given charge of Karnataka and Punjab, both states where the BJP was expected to and did indeed improve on its performance. As a Rajya Sabha member and one of the country's top lawyers, Jaitley isn't exactly staring into space. He believes the BJP should avoid theatrics and stick to issues of governance. Says he: "We should keep up our ideological attack on the Left instead of going after individuals, though the foreign origin issue won't entirely go away. We've to fulfil our destiny as a right-leaning centrist party." There's yet another point that he makes: "There are those in the BJP who'll ask whether this result means that we can't succeed with a positive campaign? But we'll have to be cautious and can't give up everything just because we fared badly. Others will interpret the mandate to mean that economic reforms can only proceed if accompanied by populist measures."

Jaitley's musings could be a pointer to the much-touted process of chintan that will now begin in the BJP. What's really worrying party strategists is that it lost as many as 40 seats in urban India. "This was supposed to have been our India Shining constituency. Urban India is where we were really defeated," says a BJP strategist. The loss of upper-caste support in UP is another cause for concern. "I've no idea how we can recover if we can't improve in UP and Bihar," admits spokesman Prakash Javadekar.

The losses are still being counted. The India Shining urban constituency has been lost. There's no Hindutva issue in sight that the party can seize on. Flogging a dead horse like the Ram mandir may not be possible without a "friendly" government, and may in fact be counter-productive as it could invite the wrath of Delhi's new rulers. The Hindutva constituency would have naturally picked on the foreigner issue but that too has lost its steam after Sonia's "renunciation". The reasonable face of the BJP, Atal Behari Vajpayee, is headed for retirement. Advani is a troubled man. The second-rung leaders are either looking ridiculous or completely demoralised. What's more, with Rahul and Priyanka waiting in the wings, the future seems to belong to the Congress.

Faced with disaster, only a handful of BJP leaders have been able to retain their sense of humour.As one senior leader put it, "I have asked for helmets, particularly to protect those who were planning to shave their heads. Otherwise I am getting ready for a long spell of unemployment." With the India Shining bubble having burst, the landscape certainly looks bleak and desolate for the BJP.

Hold Back The Waves