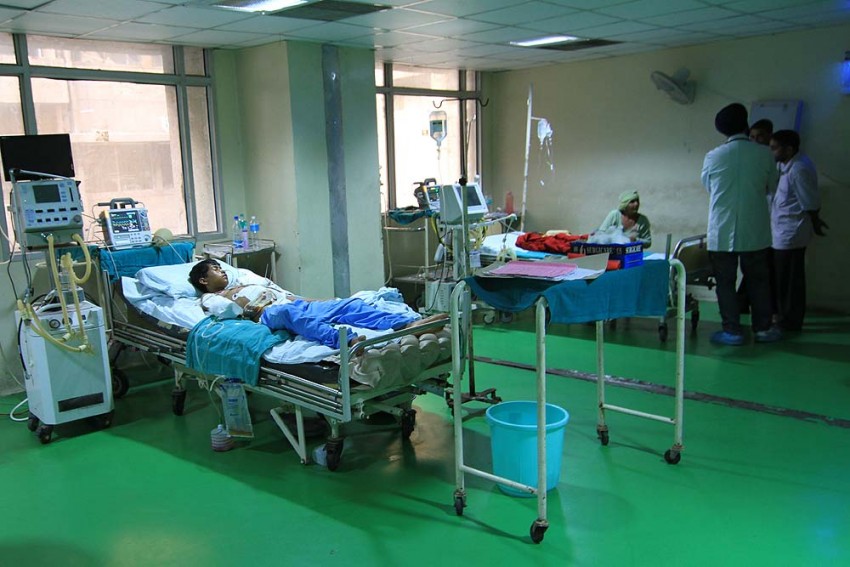 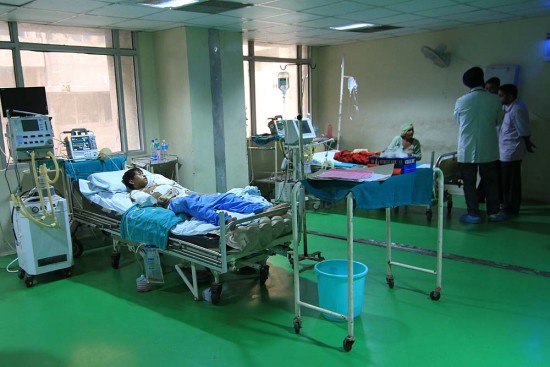 It’s the eve of the talks between the national security advisors of India and Pakistan but the shells keep raining down along the LoC. On India’s Independence Day, Shahnawaz, 13, a resident of the highly militarised Balakote sector in Poonch district, was walking home after the celebrations at the local school. A shell fired from the Pakistan side exploded in his village. It left his left shoulder fractured and the lower part of his right arm severed. The same shell killed sarpanch Karamat Hussain (52), teacher Abdul Rehman (42) and Moham­med Amin (18), also a student. In a second shell explosion, Mohammed Sheraj Khan (17) and Moin Khan (10) lost their lives. The next day, 35-year-old Nusrat Bi was killed when a mortar shell ripped through her kitchen walls. Over the last week, scores of border residents have sustained horrific injuries, and the numbers continue to climb. Besides Balakote, Manjakote sector in Rajouri and RS Pura in Jammu also came under heavy fire in the fresh round of truce violations.

The issue is certain to figure prominen­tly during the August 23 meeting between the two NSAs, but amid the allegations and counter-allegations of “unprovoked fire” and demands of “bullet for bullet”, it’s the poor border villagers who bear the brunt of living at ground zero. On August 16, J&K deputy CM Dr Nirmal Singh visited the Government Medical College and Hospital, Jammu, where Sha­hnawaz is in an ICU ward, coping with an amputated limb. “He can’t beli­eve it, it’s heartbreaking to see him wri­the in pain,” says Zakir Hussain, a relative attending to him, adding that “in our fenced out village Dharati and adjoining areas we rely heavily on farming and manual labour. Amputees live a harsh life here.” In the emergency ward, another boy from the same village, Rameez Raja (15), is also recovering. Doctors fear he may have to undergo a leg amputation.

Politicians and ministers, accompanied by supporters and gun-wielding personal guards, visiting the traumatised villagers in hospital has become a common ritual. “They come only for the photo opp­­­ort­u­n­ities,” says a visibly upset villa­ger. Tea­cher Bas­h­arat Khan, a native of Bal­­a­k­ote sector, lamented that “politicians make promises to rehabilitate us away from the border whenever civilians get killed. But the promises are never fulfilled”. He says the border skirmishes have increased since the BJP came to power.

In Poonch, the border residents live in an undeclared state of curfew. “The army has occupied vast tracts of land here and the fence runs through agricultural land, but poor farmers are never compensated. Balakote panchayat has been divided into two parts by the border fence. Villagers inside these barbed corridors live in pathetic conditions,” sarpanch Karamat Hussain, who died on August 15, had told this writer during an earlier visit.  Along the 103-km-long LoC which bounds Poonch on its three sides, many villages are literally ‘open prisons’ as they have landmines on one side, close to the zero line with Pakistan, and on the other, a wall of concertina wires technically called the Anti-Infiltration Obstacle Sys­tem (AIOS)—constructed by the Indian army after a ceasefire in 2003.

In most areas, the fence has been erected several km away from the zero line, leaving the forward villages sandwiched between the two. “A panchayat ghar and a dispensary (ayurvedic) is the only government infrastructure we have in our village. But these structures are also in a shambles,” Hussain had lam­ented, asking: “Where is the border area development fund going?” 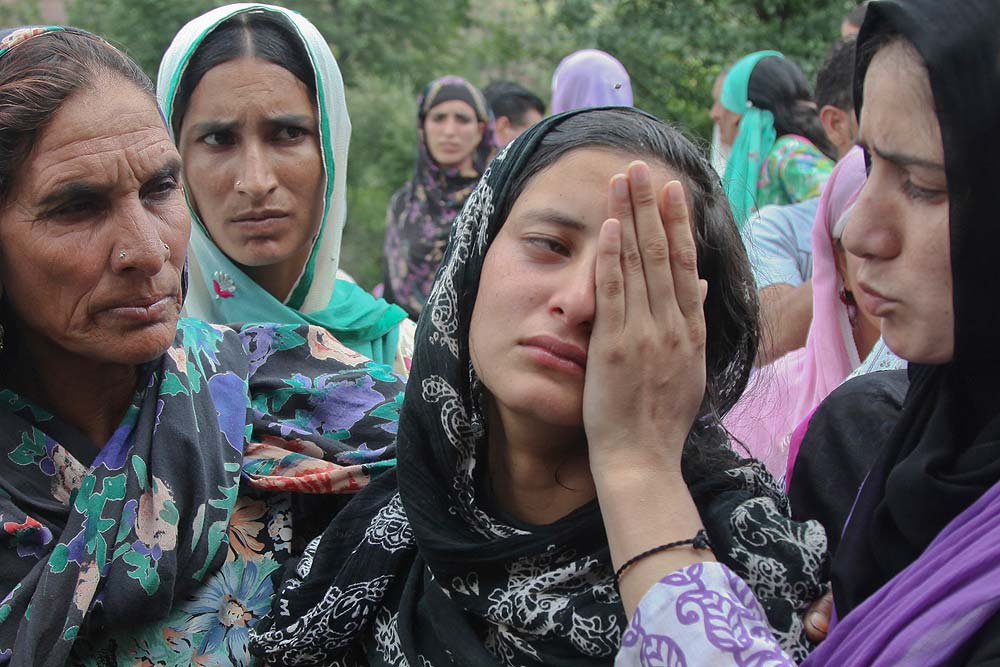 Meanwhile, in Delhi the Modi government is going ahead with a “commemoration” and “celebrat­ion” of the golden jubilee of the 1965 Indo-Pak war. A series of eve­nts are planned from August 28 to September 26. Most people in Poo­nch, though, remember the war quite differently. For it chan­ged their life irrevocably. In early August, 1965, under Operation Gib­raltar, Pakistan pushed armed infiltrators into Poonch to instigate a rebellion. On September 17, the Indian army launched Operation Clearance, forcing infiltrators and thousands of their local supporters and sympathisers to flee across the border.

“Earlier, we’d get a message from him occasionally from the other side...I’ve spent the last 50 years of my life in hope, despair.”
Barkat Bi, 80-plus, Salotri village

According to elders here, members of the majority community first plundered homes belonging to the minority communities—who had to flee their homes. Revenge attacks followed with the help of the army, targeting anyone who had sheltered infiltrators,. There was a mob frenzy and communal passions ran high. Everyone suffered. Loot, arson, killing, rapes, forced conversions and marriages of young women, they have seen it all. “Before the 1965 war, the border was porous. People had farms and property on the other side of the ceasefire line (redesignated as LoC after the 1972 Simla agreement). People would frequent both parts of Poonch with few restrictions. Cross-border marriages were common,” remembers an elderly man in Men­dhar tehsil.  “I was among those who suppor­ted the infiltrators. I also fled across the border fearing army action but returned utterly disillusioned a couple of months later. We realised Pakistan was interested only in gaining territory,” he admits.

Nevertheless, border hostilities notwithstanding, human ties have not much changed. Despite different national ide­ntities, people of erstwhile Poonch still have cross-LoC bonds and inter- community relations. A common cultural heritage and attachment to the birthpl­ace continue to attract people. Much-awaited relief was provi­ded to members of divided families in ’06. Chakan-da-Bagh—once a mine­field—was turned into a border crossing point for the Poo­nch-Rawalkote cross-LoC bus. Event­u­ally, cross-LoC trade too was started but it’s all still just a symbolic exercise, rem­aining hostage to border hostilities.

An octogenarian, Barkat Bi, lives in bor­­der village Salotri. She was separated from her husband, Niaz Mohammed, during the ’65 war. “Earlier, we would get a message from him occasionally from the other side. He was settled in Haj­eera, a few km away. But about a decade ago, we lost touch with him,” she says, summing up her story: “I’ve spent the last 50 years of my life in hope and despair.” Among the fortunate few who reunited with their separated relations after the cross-border bus service started is Anara Begum (96). She fled to the other side of Poonch along with husband Navab Khan in 1965. After 44 years, she came back to her only son, Rashid, who lives in Jhullas, in ’09. The J&K HC gave her relief along with a dozen other elders on “humanitarian gro­unds”, asking that they not be evicted during pendency of the case.

During the last six decades, local residents feel not enough has been done to build peace along the LoC. What they want is “bold initiati­ves” by both countries. “There sho­uld be a sound joint mechanism to monitor the ceasefire and institutionalise the existing confide­nce-building measures,” they say.  “The ’65 war was the most dreadful thing that happened to us,” believes Mohammed Hussain (65), who retired from the Indian army and is a resident of border village Degwar. “Celebrations will only open the old wounds. Given the situation, border residents will celebrate only long-lasting peace...that alone can be a balm on the wounds inflicted by Partition and subsequent wars.”

Struck In The Craw