No power, no hands. The small farmer sees little relief. 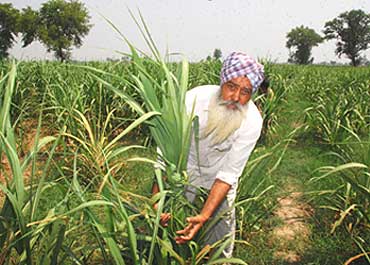 Balwinder Singh of Sakho Majra in Ropar district is frustrated with our policymakers. Ordinarily, a small farmer like him with six acres of land should have been happy with the budget's promise of more funds for rural infrastructure and agricultural credit, as well as plans to set up a task force to deal with non-institutional loans. But Balwinder's experience a couple of years back of trying to get subsidy on a zero drill machine costing Rs 45,000 has made him cynical. "I am entitled to a Rs 5,000 subsidy, but the process of getting it proved so expensive and cumbersome that I gave it up." Though farmers are happy that the government is planning to provide fertiliser subsidy directly to them, "what will eventually matter is the mechanism by which it reaches us".

In the middle of a harrowing paddy sowing season with no signs of monsoon rains, few farmers have paid much attention to the budget. In village after village, all the farmers want to know is whether the government has announced plans to ease the power shortage in rural areas.

Kesar Singh of Chalaki village says many farmers like him have been able to plant only 30 per cent of the intended paddy crop due to the power shortage. "As against our requirement of 12-18 hours of electricity, we are getting only 6 hours. We have to pump up water with our diesel gensets. After the recent fuel price hike, just one watering of paddy costs me Rs 400 per acre. I am switching over to maize cultivation now," says Kesar Singh. His advice to the government is to provide fuel subsidy if regular power supply cannot be ensured.

The Centre's plans to hike spending on rural infrastructure has brought some cheer though. But it has not offset the worry of small farmers in Punjab and Haryana facing a rise in cost of agricultural machinery in an era of shrinking labour availability. Most small and marginal farmers point out that with labour costs doubling in the last two years, and mechanisation of farm operations affordable only for the large farmers, farming is fast becoming unviable.

Stresses Balbir Singh Rajewal, president of the Bharatiya Kisan Union (Rajewal), "The budget has not really focused on protecting the interests of small farmers. It's good that the government accepted our demand of giving fertiliser subsidy directly to the farmers, but it should have also made the recommendations of the Commission for Agriculture Costs and Pricing (CACP) legally binding, as it's done scientifically." There is also some disappointment among farmer groups over the lack of focus on R&D in agriculture, and disinclination to rev up the indifferent agriculture extension services at the village level. 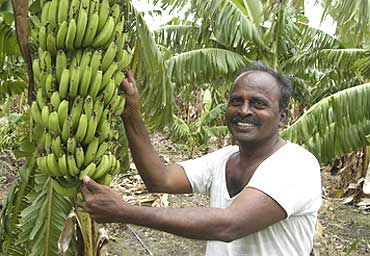 View From The South

As farmers of all faiths were invoking the rain gods in the dusty Doulatabad town in Andhra Pradesh, the central government dealt them a fresh blow with the 2009-10 budget proposal increasing fund allocation for NREGS. What's the connection? Well, for the last two years, farmers here have been hard-pressed to find farm help as most workers now opt for NREGS projects. "There has been an unprecedented shortage of farm labour. Even when labour is available, they demand double the wages and two bottles of toddy to work in the fields," says B. Narasimha Reddy, 42, vice-president, Bharatiya Kisan Sangh in Kasala village in Medak district. He claims farm production has dropped due to the lack of workers.

To farmers, the increase in NREGS allocation means more non-farm work being available and a consequent loss to them. Srinivasa Reddy, 45, sarpanch of Choutkur village, echoes the sentiment: "The workers have found an easier way of earning Rs 100 a day with the NREGS projects. " Shortage of farm labour has resulted in sugarcane production in Choutkur village dropping sharply from 20,000 tonnes to 1,500 tonnes in the last two years. Reddy, who owns 50 acres of land, is hopeful the government will evolve a mechanism to ensure NREGS work is not on offer in the region during periods of harvesting and sowing.

Mashetti Prabhakar, who owns 30 acres of land in Doulatabad, says the budget announcement "has come as a double blow to small cotton farmers, who are already reeling under the drought-like situation in the state". For the bottom-rung NREGS beneficiaries, however, the expected rise in daily wages has brought great joy. Satyanarayana, 35, of Pochampalli village points out, "Not every farmer gives us work. Therefore, we prefer working for an assured income in the NREGS." Rangaiyya, another beneficiary from village Choutkur, is hoping the increase in NREGS fund allocation will push up minimum daily wages from Rs 100 to Rs 125.

Another budget proposal that has caused considerable confusion is the one providing direct nutrient-based fertiliser subsidy to farmers. Mallesha, 50, a small farmer, says the "proposal is ambiguous. Before putting up a proposal, the government should have consulted with the farmers." Narasimha Reddy wonders how the proposal will be implemented. "I need 50 bags of fertiliser, so will the government provide subsidy on my total requirement or put a ceiling on the number of bags. If there is a ceiling, the scheme will not serve my purpose."