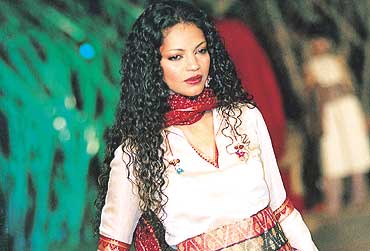 outlookindia.com
-0001-11-30T00:00:00+0553
You don't always need to feel hot to look hot. Nanotechnology can help you step into a pair of trousers to keep you cool even at the height of summer. Next time you visit your nearest apparel store, look out for those trousers that don't stain, oxygen ion-embedded shirts that bring down stress levels or anti-bacterial underwear made from bamboo fibre. Don't be stuck to your cottons and silks, wake up and get gabbing in the new fab-vocab that is redefining the idea of clothing in India.

Germany took the lead in using nanotechnology for fabric development in 1998. Their attempts resulted in a corporate closet customised to the jetsetting lifestyle of the urban male executive. Shirts that don't sweat, trousers that don't wrinkle, nanotechnology has helped develop these thinking garments. In India, menswear brands like Raymond's, Van Heusen, Parx, Dockers have taken to competing each season to launch innovations that pamper male sartorial sensibilities.

So, Raymond's and Van Heusen locked horns in March this year to make the hot Indian male feel cool. VH turned to Smart Fabric Technology, patented by Outlast Technologies Inc, US, to launch Cool Pants. Molecularly altered, the fabric absorbs, stores and releases body heat according to the weather conditions outside to ensure an optimum temperature for the body. They don't come cheap at Rs 1,599, but if you have the money, there are 10 different shades to choose from and most stores in the market stock them. 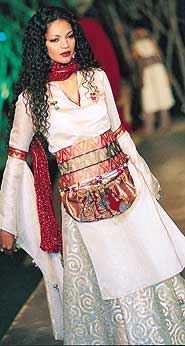 Consumer feedback has been mixed; people always perceive such innovations with apprehension. Till they get a feel of it. Apurva Chamaria, marketing manager, Ranbaxy, was initially reluctant to step into something new like this. "I thought the fabric must be chemically treated and not pure, hence uncomfortable." But once he did, he can't help exulting, "These pants do actually help you stay cool through the day." Cool Pants have competition in Cool Plus, Raymond's suit-lengths in a unique blend of wool that expel sweat through capillary action and has special micro-slits that facilitate instant evaporation of sweat. Boardroom dons have never had it better.

And while purists poured scorn when Arvind Mills first launched their denim-lycra jeans two years back (how can denim be denim when it doesn't feel like denim, they asked), the fashion-conscious gave it a friendly leg-up. This summer it's denim-linen jeans from Lee, marketed in India by AM. "The idea is to improvise aesthetically and functionally," says an official at AM. And even as denim-linen beats the heat out of your summer, the Central Silk Technological Research Institute in Bangalore is doing your thinking garment for winters. Voila, a blend of Eri silk and lycra, gives you a denim-feel fabric to keep the cold at bay. Eri is one of the four varieties of silk grown in India, the others being mulberry, tassar and muga. Grown largely in the Northeast, Eri silk, says Dr T.S. Somashekhar, institute director, "has thermal properties that make it ideal raw material for winter clothes".

Silk's all fine, but what of fabrics made of soybean, bamboo, corn or banana? Indians, unwilling to sink their money on such R&D, are not manufacturing them yet but abroad these unconventional fibres are already being put to successful commercial use. Promoting the cause of alternate natural fibres, Euroflax Industries in Mumbai is importing bamboo, soybean and corn yarn from China and trying to sell it commercially here. "Bamboo has a lot of anti-microbial properties, so we are looking at its use in making bed linen and innerwear," says Ashish Mittal, director, Euroflax.

Mittal is also sending bamboo fabric samples to a host of fashion designers. Among them is Delhi-based Ashish Soni, who is excited about using this fabric in his future collections. "The feel of the garment is soft and it is quite friendly to various surface ornamentation techniques as well," says he.Former model Milind Soman too is somewhat of a bamboo buff—he has a sherwani and a shirt in bamboo designed by fashion designer Madhu Jain. "It feels great to wear something that's eco-friendly," says Soman who, along with Jain, put together a bamboo fashion show at the World Bamboo Congress in Delhi last year.

In Bangalore, designer Deepika Govind has been experimenting with blending traditional fabrics with alternate natural fibres. For last year's Lakme India Fashion Week, she blended silk with corn fibre. "Corn blended with silk makes the garment lighter in weight, more breathable and adds a unique texture," says Govind who has also developed a variety of aromatic silks. For LIFW '05, she blended silk with modal, which like tencel, is a man-made fibre made from the cellulose in wood pulp. "The best thing about these fabrics is that they drape very well," says Govind. They are also more supple than pure silk. That makes them ideal as blends for naturally stiff fabrics like khadi and cotton. A starched, stiff, 100 per cent cotton sari would balloon unyieldingly around you, but blend it with tencel and it'll drape lovingly around your contours.

Some, however, remain unexcited about this fabric fanfare. They will remain restricted to a niche clientele, feels Dr Gul Rajani of the textile engineering department, IIT-Delhi. "Properties induced in these garments by nanotechnology don't last," he says. "Fifty-odd washes and it will be just another ordinary cotton shirt," says Rajani. "Such innovations are more suited for a Western lifestyle. In the West they discard their clothes faster and their washing is also gentler," he adds. Not really, say experts Somashekhar and Mittal. They predict a willing market for these fabrics in a couple of years. Soya shirt with corn pants, anyone?