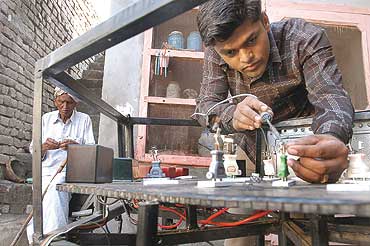 As a billion ideas whiz past through his neurons, Prem Singh Saini is hard at work trying to reshape the future. Across his street two buffaloes sit languidly and stare, almost in wonder at the next great idea that is likely to pop into Saini’s head.

With over a hundred innovations to his credit, including over 30 which have found acceptance from the National Innovation Foundation, one would expect Saini to be crackling with energy. Instead, a man on the edge of frustration sits in his house looking at a pile of letters that are vague in encouragement and firm on denial.

In Pasiala village near Ambala, the Saini brothers are well known. Younger brother Balram, also an innovator, switched to politics after a similar disillusionment with the Indian scientific community’s bureaucratic alleys. Two years ago, Prem Singh was rubbing shoulders with the likes of President A.P.J. Abdul Kalam and CSIR director general R.A. Mashelkar on the Mughal Garden lawns. Prem Singh’s latest innovation—a water pump that is operated through a GSM mobile phone—was interesting enough to merit an invitation. "It’s quite simple," says Prem, "and you can use it to switch it on and then off by simply placing a call."

A call from the mobile phone switches the pump on. A few hours later, the owner can place another call and after an appropriate number of rings, the pump is switched off. "Even a call charge will not be levied," says Prem, cautioning that, "of course you have to remember whether you are switching it on or off." The pump will not work if there is a call from a wrong number.

Since then, Prem Singh and his ideas have made several trips to Delhi, including a trip to the PMO. He was asked to meet a joint secretary in the PMO for further consultation. "He told me that if they helped me, then they would have to help thousands of others. That ended the meeting and I came back to Pasiala," says Prem. His other innovation, which he claims can end train accidents, also evinced little interest in the railway ministry. "Earlier I was asked to meet several officials from the railway safety board but no one had the time. I finally gave up."

Prem Singh came to Delhi when he was asked to appear at an army technology seminar. Once again, officials only had advice and little else. "Army chief Gen J.J. Singh’s only advice to me was not share my technology with terrorists. I haven’t heard from the army HQ." Even a letter from CSIR’s R.A. Mashelkar in February 2003 promising help has now been buried in his pile of letters. "I never heard from them ever since."

His younger brother, who also doubles as the sarpanch, holds out his home-made mechanism to burst fire-crackers through a remote-controlled device. "Two years ago a nephew burnt his hands. Since then I have been working on this idea." A few months ago, Balram was approached by a Gujarat-based trader to turn his idea into a business venture. With seed money of Rs 25,000 in his kitty, Balram is now tinkering around in his makeshift workshop to build a prototype. "If this works, we will market it." From saving fuel to safety devices, running cars on auto-pilot to making robots that can man the borders, water pumps that switch on when the water is released and switch off once the tank is full—the Saini brothers have ideas a dime-a-dozen. But in little-known Pasiala, as the farmers get ready to rain-feed their thirsty crops, there’s barely any recognition of these home-grown Edisons.