On how our netas while away House time 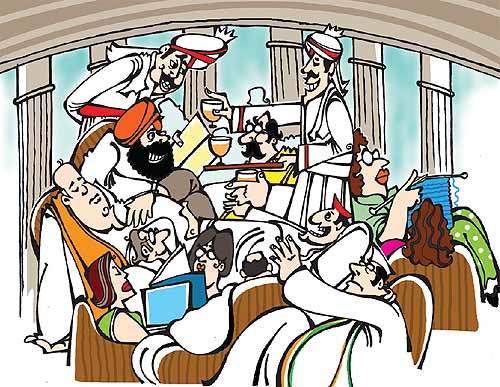 Imagine a school of very badly behaved children who never listen to the teacher, jump, scream and disrupt class even before it begins. After having closed down the school for the day, they lounge around in the classrooms and hang about in the corridors chatting and whiling away time. Now imagine if the kids are actually getting paid for all this!

That’s exactly what our parliamentarians have been doing in the winter session. So each time the House is adjourned, what happens in the precincts of Parliament, which is supposed to be the zenith of our great and vibrant democracy?

There are vibrant conversations and a great deal of lounging around. The catering from the canteen is quite decent, so if our ‘hard-working’ representatives get hungry along the way, they can always order a hearty lunch or a tasty snack. Parliament is catered to by the railways and there’s also a rather quaint lot of liveried and turbaned waiters who seem to be dressed in hand-me-downs from the last viceroy’s last tea party. These are the waiters of the Coffee Board, who provide only coffee and toast but are a sight to behold.

Union ministers and registered parties are all allotted rooms in the circular building, as are the leaders of the opposition and chairperson of the UPA and NDA (given in the name of A.B. Vajpayee but occupied by L.K. Advani), besides the speaker and chairman of the Rajya Sabha. Many of these rooms are a hive of activity even when the House is adjourned. On the first floor, there is also a large media briefing room where the main national parties have their daily press briefing, the BJP usually at 3 pm, the Congress at 4.15. Sometimes the communists also call a briefing around 2 pm. When leaders like Mulayam Singh Yadav and Laloo Yadav want to speak to the press, they usually just step out of the main entrance and gather the cameras around. Within the building, cameras are only allowed in the media briefing room.

Besides, there is a whole system that keeps churning on. There is the parliament secretariat, the parliamentary affairs ministry that is housed in the building, the library that documents all the speeches and reports tabled in the house. Even when Parliament is adjourned, the various committees keep functioning. Some committees are headed by MPs who take their role rather seriously and diligently continue to produce reports that address policy issues. For instance, this session alone, the committee for public undertakings, headed by veteran Congressman Kishore Chandra Deo, has submitted two reports. The agriculture committee headed by the CPI(M)’s Basudev Acharya is also known for regular outputs. These are the few model students in a house of badly behaved grown-up men and women.

Can The House Ever Win?