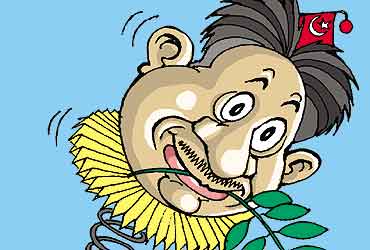 Much more than India, it was Pakistan that had been vociferously clamouring for talks. And when India produces a dozen ideas to strengthen bilateral and people-to-people ties, Pakistan's response is so childish that it is utterly unbecoming of a sovereign nation. What is bizarre is that qualified and experienced diplomats have crafted their official response. Unfortunately, it would appear that long experience has merely transformed their officials into fossils, incapable of moving beyond the tried, tested and failed rhetoric, the puerile games of petty one-upmanship and downright bad faith that has characterised Indo-Pak relations all through the '60s, '70s, '80s and '90s.

But now we are into the 21st century. Those who don't respond to the winds of change will be blown away into the dustbins of irrelevance. Nobody has the time or the patience to put up with antiquated ideological fixations and crusty behaviour patterns. Pakistan's establishment must come to grips with this—9/11 ushered in a new era of international priorities and codes. Nobody supports terrorism. Everybody wants peace. Platitudes bore. Actions impress.

India offered medical service to Pakistani children not because Pakistani medical services are inferior but because of the groundswell of goodwill in both countries triggered by little Noor's experience. It's only the weak, the inferior or the paranoid who habitually attribute malafide motives to every action. Still, Pakistan is entitled to feel weak and paranoid vis-a-vis India. Just our size on the map is sufficient to make our neighbours feel understandably small and overwhelmed. If we are truly confident of ourselves, why should we feel small or less to accept Pakistan's offer to treat Indian children in the Karachi heart institute? The best in Pakistani heartcare may not compare with the best in India, but the best there is better than the mediocre and inadequately equipped heart hospitals that dot the Indian landscape. So why shouldn't a few Indian children benefit from Pakistan's offer, even if it stems from a silly sense of one-upmanship. By accepting this offer, India is not only being large-hearted as an elder statesman, but also shoring up Pakistan's self-esteem. As with human beings, nations with high self-esteem behave in a more responsible and mature fashion. So it is in our interest to boost Pakistan's self-esteem.

Low self-esteem induces obsessive one-upmanship, which explains to some extent Pakistan's immature response to India's peace offer. To India's suggestion about reviving sporting ties, the response, in a nutshell, is: "Fine, but hey may we remind you, it is our prime minister's idea!" But more than anything else, Pakistan's response shows how badly their establishment is stuck in the old mould, their perspectives warped by several chips on their shoulder. Scuttling India's proposal for a direct bus service between Muzaffarabad and Srinagar on the grounds that it must go through UN checkposts reflects Pakistan's insincerity to the Kashmiri cause—it's not to better the lives of ordinary Kashmiris but to keep kicking Kashmir as a political football to score points with India. What Pakistan does not realise is that everybody—especially ordinary people—see through these shenanigans. Such misguided responses reflect Pakistani insincerity and not Indian intransigence as they hope.

It's not a farce but a tragedy that the establishment fails to realise how much like dinosaurs they look in today's changed world.But there is hope, only if they have the humility to take a cue from India. A few years ago, India's external affairs ministry also resembled a Jurassic Park. But in what has been a swift but understated turnaround, Indian diplomats are moving with the times. Even Prime Minister Vajpayee is moving on by boldly turning his back on his own hawkish, war-mongering, anti-Pak Hindutva constituency. As he admitted candidly, "By our recent measures, we have silenced the whispering campaign that the requirements of the forthcoming elections dictate a harsh Pakistan policy. The political leadership of this country is well aware that the constituency for peace is much larger than that which favours hostility." If such turnarounds can happen to the seemingly "impervious-to-change" Indian establishment, so can it across the border.

But the Pakistani officialdom's street fighter mindset must change first. To offer free medical treatment to disabled Kashmiris, widows and women raped by Indian soldiers is not provocative. It's downright cheap. If this is the response to a peace offer, then how can anyone take Pakistan seriously? This response is so utterly lacking in taste, so grossly misplaced in serious bilateral negotiations that if Musharraf had any sense he would fire those responsible for coming up with such ridiculous ideas that not merely are malafide, but more importantly, lower Pakistan's dignity. Being obstructionist and deliberately stoking the embers of hostility is one thing. But being cheap and damaging your nation's dignity is another matter. Pakistan's foreign secretary Riaz Khokar says, "We want to improve our relations with India, but this is going to be on the basis of dignity and honour." But honour and dignity are earned, not granted. If Pakistan wants to be treated with honour and dignity, it must behave with the honour and dignity expected of a sovereign nation and stop acting like a wannabe, foolish, reflexive opposition party.