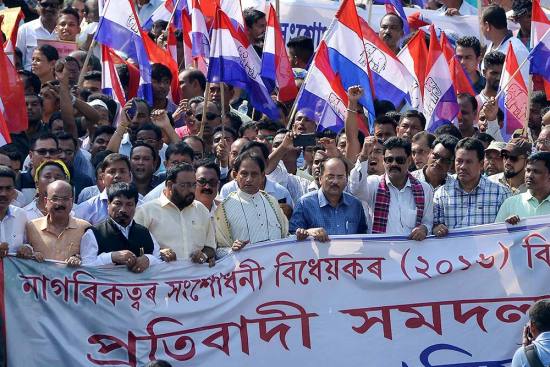 Burning tyres littered des­erted streets across Assam. Security personnel rounded up scores of protesters. In Guwahati, the Asom Gana Parishad (AGP)—part of the BJP-led government in the state—led a massive protest rally against “foreigners”.  It was a throwback to the 1980s when the anti-foreigner movement was at its peak, raising passions and sparking tension in equal measure. Thirty-three years after the agitation, not much has changed. The issue remains the same and the atmosphere as charged as ever.

On Tuesday, Assam ground to a halt in response to a bandh called by more than 40 organisations to protest the Citizenship Ame-ndment Bill, 2016, which aims to give Indian citizenship to “persecuted minorities” from Bangladesh, Pakistan and Afghanistan. For a vast majority of people in Assam, this move is a “betrayal” by the BJP which stormed to power in the state for the first time in 2016 with the promise of protecting “jaati, maati, bheti” (identity, land and home).  The bandh coincided with a meeting in Delhi of the Joint Parliamentary Committee which was formed to seek the opinion of the people on the bill.