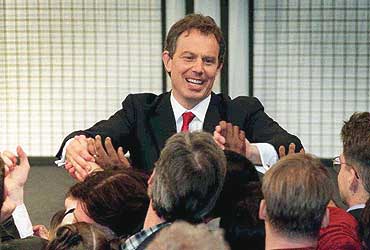 outlookindia.com
-0001-11-30T00:00:00+0553
It is not unusual for an MP, even a Labour MP, to call someone like Prime Minister Tony Blair’s special advisor a ‘maniac’. This happened after Blair’s advisor Robert Cooper justified neo-imperialism.

Cooper declared: "When dealing with the more old-fashioned kinds of states outside the postmodern continent of Europe, we need to revert to the rougher methods of an earlier era—force, pre-emptive attack, deception.... The opportunities, perhaps even the need, for colonisation is as great as it ever was in the 19th century.... What is needed, then, is a new kind of imperialism.... We can already discern its outline: an imperialism which, like all imperialism, aims to bring order and organisation but which rests today on the voluntary principle."

Actions in Afghanistan are a clear outcome of this line of thought. Will it be Iraq next? There is rebellion in the air in the House of Commons over Blair’s support to President George Bush’s intention of getting rid of that old bugbear, Saddam Hussein. As always, Blair sounds more convincing than Bush on what Bush says he believes. But other British leaders do not share his views. Blair’s cabinet colleague Clare Short has threatened to quit if the UK were to back the US in blitzing Iraq again.

On this, the old Left within New Labour is beginning to stir. Some 641 constituency units of Labour are being urged to pass resolutions against an attack on Iraq. The Labour rebels are asking instead that Blair focus on helping solve Palestine.