Could the string of similarities in the fall of Kabul in 1996 and now point to what's ahead? 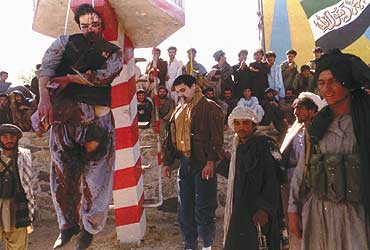 As Northern Alliance (NA) forces—their opponents shattered by weeks of American bombing—moved confidently down from Bagram airport into the capital, they met no resistance. Villagers along the way—many of them ethnic Tajiks persecuted by the Pashtoon chauvinist Taliban—threw flowers at advancing troops. Stray Taliban fighters, mostly Pakistanis and Arabs, were beaten up or shot. American Special Forces troops moved quietly along with the Afghans, chatting to base on satellite telephones.

In September of 1996, Taliban forces—backed by Pakistani soldiers in civilian garb and isi agents clutching walkie-talkies—advanced through Pashtoon villages to the east of Kabul. People cheered and—yes—threw flowers. They had begun their push from the eastern city of Jalalabad and the advance on Kabul was little more than a half day's pleasant drive through the stunning scenery of the Silk Gorge and along the lakeside at Serobi. Once-dreaded local commanders had either all been bought off with Pakistani rupees and dollars, or were dragged out and summarily executed.