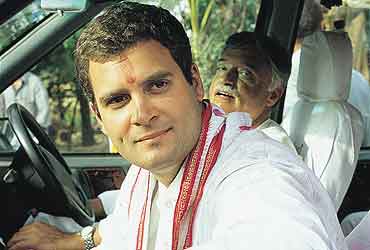 That Rahul Gandhi would spearhead the Congress campaign for revival in UP became clear the instant he decided to contest from Amethi; it was underlined last fortnight when he took on CM Mulayam Singh Yadav on his own turf, sharply criticising the state government for the deteriorating law and order and power situation.

The UP CM may have dismissed him as a "bachcha", but party leaders say Rahul isn’t a parachute politician. He’s been doing his homework and meeting party workers since 1999. He operates in corporate style; he likes facts, figures and structured presentations. Since he became an MP, he’s been working on a UP revival plan and has already held several brainstorming sessions with party strategists. Rahul works mainly out of 10, Janpath where he meets the party leaders and workers who are his main channels of feedback and information. But he also visits his office on Gurudwara Rakabganj Road, where trusted aides Kishori Lal and Manoj Mattoo look after Amethi affairs.

It isn’t yet clear whether Rahul will become an AICC general secretary immediately, or will wait until the organisational elections later this year. Either way, UP is on the top of his agenda. He will work closely with the UPCC president, likely to be someone of his choice. Rahul is comfortable with former MP Sanjay Singh, but the latter’s recent association with the bjp may work against him. Salman Khursheed, who’s served as UPCC chief before, also enjoys a high comfort level with Rahul. Among the senior party leaders Rahul trusts Natwar Singh, Kamal Nath, Satish Sharma and Jairam Ramesh.

A group of young Congressmen will form Rahul’s UP revival team, maintaining the party’s "youth focus". Indignantly responding to Mulayam’s characterisation of Rahul as a "bachcha", UPCC chief Jagdambika Pal said: "To call Rahul Gandhi a child is an insult to the 40 crore...