Iraqis feel again the despair of being in someone else's war. Or is it just a multi-million-dollar assassination bid? ? Updates 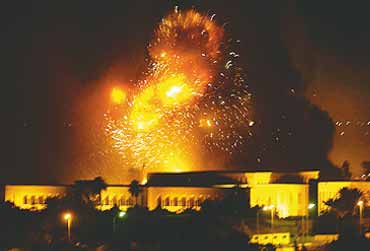 outlookindia.com
-0001-11-30T00:00:00+05:53
You have about forty-five seconds from when the dogs start to howl to prepare yourself for the force of the blast. Twenty-first century weapons of war touching a nerve in basic animal instinct. Just before the first cruise missiles ripped into the heart of Baghdad, the packs of strays went crazy, their ears tuned to the eerie whistle of the shells' supersonic flight. I watched from my hotel window as the bombs hit target. Government buildings disappeared in a blanket of orange flame which wrapped itself into a plume and drifted across the night sky, the cloud of dust and smoke peppered with small explosions. And it was relentless. Again and again, the skyline was bathed in a brilliant white light.

As the missiles rained in, in quick succession, the Iraqi gunners—many stationed on buildings on America's target list—fired back more in hope than expectation, their small pink tracers arching in vain into the night sky. Heaven alone knows, though, how it felt to be an ordinary Iraqi living right next to these buildings. US President George W. Bush says that the war is being fought, at least in part, for these people. But for those huddled in the homes trying to protect their children as the windows blew in and the neighbourhood was torn apart, thoughts of America must have been anything but liberating.

After all the months of speculation about what sort of a campaign the US would inflict on this city, "Shock and Awe" had finally come to Baghdad. Even the Iraqi people, who have been subjected to America's wrath more than any country over the last decade, could not have been expecting this sheer barrage. It pushed this city into stunned disbelief. But these attacks are also, in a sense, personal. Iraqi state television admitted that the bombs had also struck palaces owned by President Saddam Hussein's wife and daughters. This was an attempt at a multi-million-dollar assassination. But shortly afterwards, Saddam appeared again on state television, flanked by his war cabinet, spitting defiance at the US.

And that defiance doesn't look like changing anytime soon. Just hours before the bombing began, Iraqi foreign minister Naji Sabri described Bush as "an ignorant idiot man" and information minister Mohammad Syeed Al Shahhaf told the media corps assembled here—just as the ultimatum to surrender to the massing American forces was running out—that he was busy trying to decide whether the invading troops should "be buried in mass graves or one at a time". But if there was any doubt in anyone's mind about the scale of the American military machine, the last few days of bombing will have removed that. The reality is that the American military machine is enormous and unrelenting. US diplomats bulldozed the United Nations inspection process out of the way and its troops will try and do the same to the Iraqi forces.

As the advancing US-led forces head towards Baghdad, the army here are preparing their defences. They know that the Americans' worst fear is being drawn into house-to-house combat. And the Iraqis are not putting their troops out on the streets—where they could be seen—at the moment, because they have learnt their lesson from the last Gulf war. But bunkers are being built and troops are in the city. Saddam promised that any invading force would be defeated at the gates of Baghdad. The Iraqis know that with public support in the West for this war fluid at best, too many body bags could stop the Americans in their tracks.And they know too that modern technology is little use in a housing estate, where every room becomes a new battlefield.

The Americans claim that the Iraqis are using schools and mosques to hide their army but when I went to the Al Shawi Mosque here in Baghdad, the only troops I saw were praying for salvation. Young Muwafiq Dhiab was one of those manning an anti-aircraft gun on the kind of government buildings that the US has been pummelling every night. We asked him if he was afraid now that the bombing had come to Baghdad. He yanked on his insignia. "Look at this," he said. "It says God is great. As the missiles were falling, all of us were manning the anti-aircraft guns and we were chanting how sweet victory will be with the help of God."

Maybe, maybe not, but to their credit, they were staying put at their posts and fighting back against overwhelming and impossible odds. Stuck in the middle of all this are the civilians. The authorities have been quick to bus the remaining journalists around hospitals after each night of bombing to meet people who described their being injured in the bombardment. At the time of writing, the authorities say hundreds of civilians have already been injured. It's impossible to verify the figures but it's equally impossible that civilian injuries would not have happened in an attack of this fury and magnitude.

By daylight, though, some life returns to the city but the markets and business areas are deserted. Shopkeepers return briefly to check if their premises are still standing and those brave enough or desperate enough go out looking for somewhere to buy food. The people of Iraq have been through 12 years of war and sanctions. You can see the exhaustion on their faces. The American government might be promising to deliver them a bright new future, but ordinary people here also feel the US has been responsible for much of their suffering in the past. The sanctions imposed on this country may have had the stated aim of "containing" the Iraqi government. But the severity of the restrictions which lasted for almost a decade till they were finally relaxed by the United Nations in the year 2000 devastated the ordinary people.

The United Nations admits that hundreds of thousands of children died as a direct consequence of the sanctions. Like much of West Asia, the Iraqi people over the years have watched the Americans switch backwards and forwards, supporting and then dropping Arab leaders, depending on the domestic political concerns back in Washington. So, I'm asked by people contemplating the replacement of the present military leader with an American one, why should we trust them now?