A page on the quirks in public administration 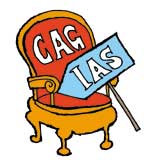 IAS or IAS?
Telecom secretary Shyamal Ghosh may be the hot favourite for the post of Comptroller & Auditor General (CAG), but the government may be in two minds now—whether to pick an IAS officer or one from the Indian Accounts Service. One reason is to revive a practice which ended 15 years ago with Rajiv Gandhi deciding to shift to the IAS. Another is some kind of conflict of interest—it is suspected that an IAS man could be soft while scrutinising accounts of the departments he served in. Meanwhile, in power, while secretary Ashok Basu is set to take over as chairman of the Central Electricity Regulatory Authority, insiders claim Basu's successor could be S. Prabhakar, special secretary in the ministry, who has the blessings of both the government and Shiv Sena (minister Suresh Prabhu's party).

Clipped Wings
So how's Garuda, MTNL's wireless-in-local-loop (WLL) service, doing? A senior MTNL official demonstrated its efficacy the other day. He put through a call to his secretary in the next room. The answer: "This number does not exist"! Too many subscriptions, and too little capacity, explained the official, who's believed to be discouraging subscribers. He also contends that the same problem is set to plague Touchtel, Bharti's fixed-phone telephone service, which, according to him, had to launch in a hurry because of a funds crunch.

Reserved Post
With Bimal Jalan retiring this yearend, hectic lobbying is on for the RBI governor's post. North Block sources admit the race is confined to a troika of high-profile bureaucrats: N.K. Singh, member secretary, Planning Commission, Montek Singh Ahluwalia, currently in the US as IMF's independent reviewer, and former petroleum and finance secretary Vijay Kelkar, India's man in the IMF. The dark horse is RBI deputy governor Y.V. Reddy who has spent six years in the bank. The job will finally go to the best and the most favourite of the prime minister, since it is he (and not the FM) who selects the RBI chief.

Hard Software
Guess what health minister C.P. Thakur did when he wanted TV spots for his ministry? He floated a tender for responses strictly from software companies with a turnover of at least Rs 20 crore. The ministry is now saddled with offers from a host of Bollywood television software companies. Trailing them are all Delhi-based companies. Why? Because the locals are confident Mumbai companies wouldn't stoop to actually serving a lowly contract from the ministry and would therefore outsource.