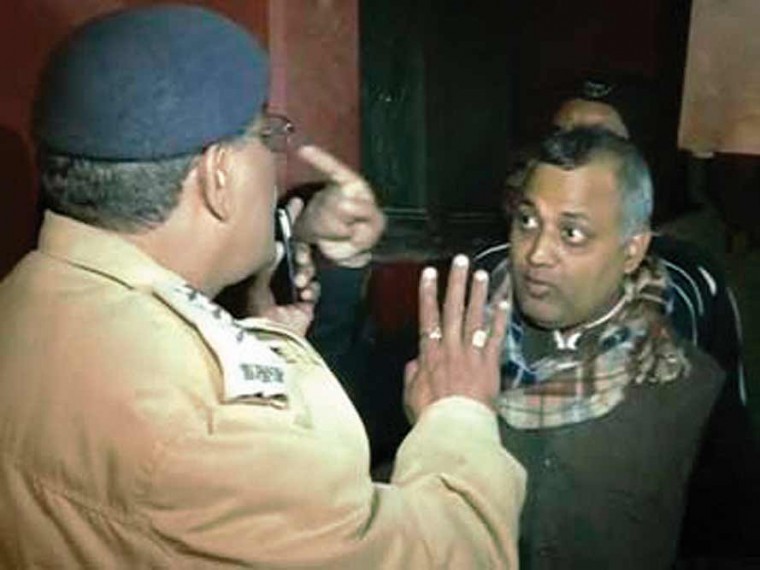 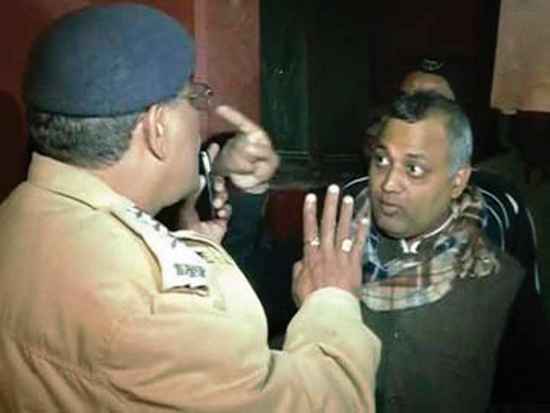 Even those well disposed towards AAP must have felt the first tics of disquiet when Somnath Bharti walked into the quiet corridors of IIC, with all the sense of entitlement of an Ariel Sharon stomping into the Al-Aqsa. This was just days into the government. The honeymoon was dew-fresh; the papers played it coyly as also-ran news. So here’s a recap, for those who came in late. Like all ministers who want to control the police, Bharti is also culture minister, so they called him for a film festival inaugural. They waited...and wai­ted. Screening dela­yed. No minister. Finally, they went ahead with the show. It was Satyajit Ray’s Parash Pathar. Quite unca­nny that. It’s about a bank clerk, as defiantly aam aadmi as you like, who discovers a stone that turns dross into pure gold and goes a bit haywire. It wouldn’t have harmed Bharti one bit to sit down and watch the film. But he arrived late—at what precise stage of this mirror tale we don’t know, approximately an hour into it—with his infantry, all wearing their T-shirt slogan on their topi as usual. Film has to stop. Everyone has to listen to the AAP story as the minister takes the lectern. And then he leaves, after putting in a protest in the register for his name not being printed on the invite! Worthy of the master ironist himself.

When the Habshi-hunting sta­rted, the cat was out of the bag about the ‘politics of the new’, and soon extreme antonyms like fascist and anarchist started flying thick and fast. One thing is granted. Bharti is an early recruit, from the thinner talent pool they had to choose from, out of a smaller catchment area—before the idea of a new kind of party caught on like a bushfire and worthier names signed on. And Arvind Kejriwal, an alumnus himself, would have figured: “Oh, he’s from IIT, so he’ll make a good minister.” For all we know, the man he discarded, Binny, might have been able to handle the swing better but such are the sorry visions of technocracy that animate us today. Anyway, if a swashbuckler like Capt Gopinath represents the saner end of the spectrum of party responses to the Khirki affair, we must ask what sort of an organism we have in our midst.

A police under this man—the R.R. Patil of Malviya Nagar—is a bad idea. Let’s not arm this urban khap sarpanch anymore.

For those who saw traces of a fascist gene in the melting-pot that gave birth to AAP—even as it morphed into a Congress-like absorbent substance—it hardly matters whether you call the rose by any other name. The thing was, would the moderating influences help keep sanity? Which is why the really troubling sight came after Bharti led his mohalla posse into the houses of “those people”. Kejriwal, after a brief moment of doubt about whether to duck or to hook, decided to attack. What’s so wrong about what Bharti did, he asked defiantly. Slowly, they all took this line. One by one, Prashant Bhushan and Yogendra Yadav sought to parlay this into the ‘larger question’: should Delhi Police not be with the Delhi government? That sounds logical, doesn’t it? Well, since you asked, maybe the police should be freed from governm­ent control altogether and made an autonomous entity accountable to the people, and not still be structured like a colonial instrument of control, which breeds half the sadism. And, truth be told, handing the army and navy over to this man, the R.R. Patil of Malviya Nagar, seems like a bad idea. Let’s not arm this urban khap sarpanch any more, please.

But this is a diversion. There are even larger questions. For what is this that has emerged out of the January fog in Delhi if not the clear outlines of that old beast, the party line? Not particularly novel, especially for a party whose appeal rested on the promise of a change from command politics. For answers, we must go to the core of the enigma that is Kejriwal, the man who has behind him a long trail of fellow-travellers who fell out. Now the game is bigger, and those who have wagered on him must sink or swim with him. And what do we see? A lean and hungry man, coughing dyspeptically into the cameras. (May we suggest double-act­ion Corex, it calms the nerves too.) A deeply conflicted fascination with power, which is after all axiomatically a bigger source of corruption than money, the only sort he recognises. Pretty shallow tokenism. Take away the beacon, but I’ll keep the car, thank you. And oh, the bungalow too. It’s smaller than Sheila’s. (Exactly what the BJP says about 2002. It’s smaller than 1984.) A concern for the disenfranchised, yes, but of Mother Teresa’s sort, with no sign of thought about the structural causation of want. (Remember, his prehistory carries strong hints of an anti-Mandal stance.) Instead, like philanthropists who leave their name behind on stones, he’s not above advertising it, carrying it like a badge. Or turning it into a fashion symbol. That night on dharna, he made sure he gave off that homeless vibe, with the right kind of blanket. A talent for mainstreaming ideas of the radical chic sort, albeit in a parodic form, merely so as to look sexy.

And all the while there are ideas around him that border on outright status quoist. Traders aren’t bad (but foreign traders are—that is so like his caste-mate, Gandhi). Khap panchayats? Not too bad really. Nigerians? Very bad. If this is Anarchism, I’m Rudolf Rocker. There is no Anarchism Lite, Mr Kejriwal. You have to go the whole hog and dissolve the state. No India. No Pakistan. Just a freely associating network of self-sustaining communities. If the alternative is nuclear war, not such a bad idea? But quite some distance from the endless Bharat mata slogans of Kumar Vishwas, whose poetry, it increasingly seems, is more tra­gic than comic. (Really, the case can rest on this one guy. If you are okay with Kumar Vish­was, som­ething has to be wrong with you.) Anyway, coveting police powers, even in the name of the abstract masses, is quite the opposite thing from annihilating government. Taken with that looming, all-seeing watchtower called Jan Lokpal, it smells too strongly of a surveillance state.

Kejriwal is giving no succour to those who joined, and may indeed have seen AAP as a sane refuge from a saffron tsunami.

Kejriwal is giving no succour to all those who joined in good faith—many of whom may ind­eed have seen it as a sane refuge from a saffron tsunami. But for all its allegedly value-neutral, post-ideological mode—a child of a post-NAC NGO-isation of pol­itics, freely cannibalising ideas, ope­ning up a genuine space—its roots in pop right-wingism shows in the easy switch it made from political morality to social morality. Now, as the stress of being in government increased, with no time for Vipassana, the famed res­p­onsiveness to criticism has started fraying. In its stead, we see petulance. One role of government, we propose, may be to impart serenity to public life. But here we have a government with a deathwish, a government of camera junkies rushing to the nearest water tank for a public suicide. Should AAP demand outright that the Congress withdraw support? Run an SMS poll on that. But as Khirki shows, participative democracy is tricky business. Maybe there is room for mediating society via an enlightened rule of law.

And from the party faithful, that other argument. Criticism is only from vested interests. BJP agenda or Congress dirty tricks. We hope there’s space in their imagination for an independently derived aloofness from AAP, that they don’t fall prey to Bushisms and see the landscape in binaries (Not with us? Then with the Satan). We hope they have a few Porta­cabins for homeless critics too, and allow us to slip into one right away, instead of seeking exemption from criticism because that would benefit other parties. Yes, it would. But pray, spell out the difference first. For, it looks like whether Modi becomes PM or not is partly like that idea from Project Tiger—it’s not just about the tiger, after all. It shows the whole web of life under it is in good health. By that token, our fascist ecology is alive...and kicking. India has already had a hanging by public demand, with the judge verily stating it in so many words. Our TV debates are like nightly executions too, with one chosen voodoo doll object and the inquisitor-in-chief and everyone else sticking pins into him—it’s a culture of schadenfre­ude, and the spectator derives pleasure from this. Our films, if not about mentally blank do-goo­ders, are full of the fascist idea that one man will come to kick butt on a cosmic scale and restore order in a rotten universe (Kejri­wal, by his own admission, is an avid consumer of the genre). Not to speak of the online junta—the Indian corner of the internet is one giant McCarthy tribunal. What we saw at Khirki was the same thing, in cellular form. What next? Mohalla khaps to keep an eye on art exhibitions?

And what of the deeply anoma­lous, comic spectacle of the government at the barricades? (The one equivalent I can remember is that very elegant Communist, Indrajit Gupta, who was briefly India’s home minister, and app­eared on TV in that role to decry police atrocities!) They must move on. If you make as if abdication is on your mind, it’s the best strategy to scare off potential investors in the AAP idea. Instead of lapsing back into agitprop, move into serious theatre. Try critic-proofing yourself with your own conduct. Try winning people the conventional way, with some decent ideas for Delhi. No, not that one—not defining Delhi’s biggest problem as foreigners doing drugs and naked dance. Something better. And by the way, disrupting a film is about the lousiest thing a culture minister can do. A Ray? Hmm...Section 302 will apply.

A version of this appears in print