'At Times We Are Unable To Certify Nice Films'

The chairperson of the Central Board of Film Certification says it is time to give serious thought to exhibiting some films without any cuts. 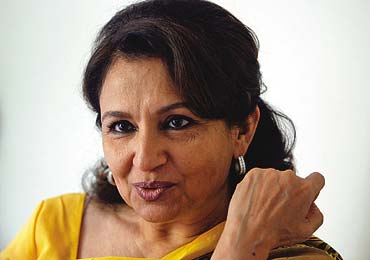 Last year, the chairperson of the Central Board of Film Certification, Sharmila Tagore, was miffed at the manner in which Union I&B minister Priyaranjan Das Munshi appropriated the board's main task of certifying films. Now, with just a month to go before her tenure comes to an end, Sharmila tells Outlook that it's time to give serious thought to her proposal of exhibiting some films without subjecting them to censorship rules. Excerpts from the interview.

Your tenure ends next month. What are the changes you've suggested to make the board more in tune with the times?

For one, I think the categorisation of films into U, UA, and A requires a little rethink. We need another category for the 15-18-year-olds, as opposed to clubbing all of them from 12-18 into the UA category. That is one area we need to look into and I think it will be accepted. Another area which requires serious thought is improving infrastructure.

The board has always been caught in a time-warp when it comes to certifying films. What prompts the change in thinking now?...