Worshipping the ballot box, the BJP aims for a Hindu awakening in Bengal; the TMC plays along, then hits out 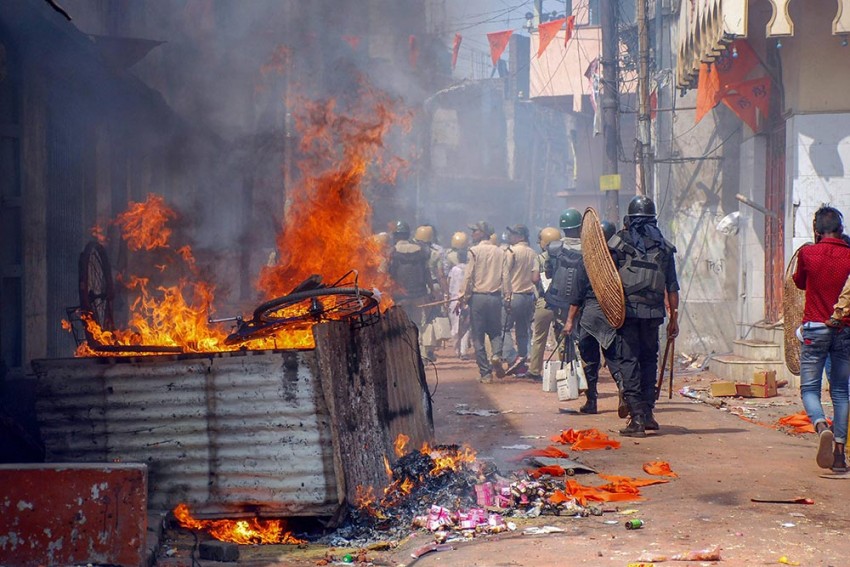 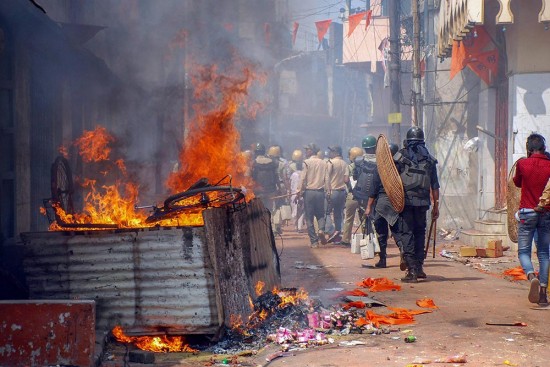 From the charred remains of homes in the Hill Bosti slums of Raniganj, it is hard to distinguish between a Muslim hut and a ­Hindu one. Except perhaps for spaces of worship in individual shanties that the flames somehow mis­sed. Those  fires were lit by mobs that cha­rged through the neighbourhood after communal clashes broke out during Ram Navami celebrations on March 26-27.

Take the house of 50-year-old widow China Badyanath, that was in the way of the rioting arsonists. She sits howling, hand on her head in a gesture of extreme hopelessness, atop the rubble—a tangled mass of burnt logs, pieces of soot-covered tin, its sharp, blackened edges jagging out. Nearby lie pieces of a trunk, its lid blown off, and which contained her life’s possessions—a few faded saris and some cash, a few thousand rupees, which she had saved up from her job as a domestic help. A rickety plywood cupboard for groc­ery—a sack of rice and some dal—is now a heap of cinders; the grain which had spilt out had got cooked in the intense heat; a splatter of dried lentil soup stains the floor. Incredibly, one corner of the tiny room, China’s pujor ghor, or prayer corner, remains intact. As framed pictures of Durga, Laxmi, Sara­swati and Radha-Krishna stare benignly back, it even seems possible that they were intentionally spared by the attackers.

“Hindus and Muslims of this locality lived like brothers and sisters for...forever,” says “a Hindu housewife”, as she identifies herself. While religious beliefs were dif­­f­­erent, she says, no one interfered in other’s opinions. She cannot say what broke such perfect amity, but will not deny rising feelings of hurt and hat­red. “Look what ‘they’ did to us,” she hisses, pointing to the wailing China. 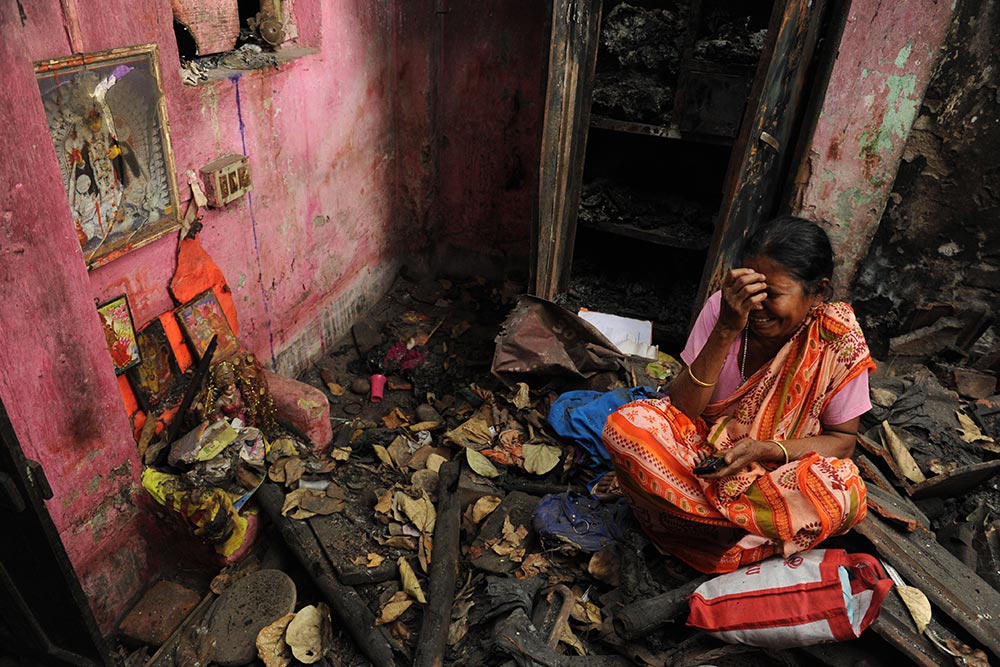 China breaks down in her ruined home

Neither she nor hundr­eds of other victims, from both communities, of the recent communal clashes which ravaged Rani­ganj and spr­ead like wildfire to other areas of Bengal, inclu­ding Asansol, Puru­lia and Dur­ga­­pur, can acc­ount for the outburst of violent hat­red. They can only point to the incident which triggered it.

A procession on the occasion of Ram Navami was passing through Raniganj when, according to eyewitnesses, “out of nowhere, stones and bricks started being pelted on the marchers”. Others recount having heard “provocative slogans” hurled at the minority community. Says one Muslim youth, “What they were saying is too insulting to even rep­eat”. But, by some acco­unts, the exhortation maro, maro were repeated after every strident cry of ‘Jai Shri Ram’ by the crowd that was brandishing sticks, swords and tride­nts. At some point, bombs exploded and gunshots were heard; people were scattered in all directions. Shopowners and others at the Raniganj market, at the epicentre of the violence, differ on ‘who started it’—a much bandied about phrase there. Disturbingly, ‘what really happened’ depended on the religious community of the person one spoke to.

For the locals caught in the crossfire, it is impossible to grasp the larger context of the events. “Why”, asks a baffled Muslim grocery store owner, “did a celebration of a Hindu festival, which, like our own Id and Muharram, has been taking place peacefully here since time immemorial, suddenly turn into a Hindu-Mus­lim riot?” Being singed in the blaze, it is difficult for them to comprehend the bigger political game that triggered the incidents. That game is a tug of war for the ‘religious sentiments’ of the people of Bengal, with a sharp eye kept on political gains. And the gain to be reaped in this case is the fiercely fought Panchayat polls in Bengal, due to be held in early May, 2018.

Long known for its ‘secular fabric’ in which all faiths co-exist harmoniously, the recent spate of violence has ripped apart what some say has been a facade—a construct of secularism generations of politicians have used cannily.

“Subsequent administrations in Bengal have always banked on the minority—read Muslim—vote to stay in power,” poi­nts out political scientist and pse­­­ph­­ologist Biswa­nath Chakraborty. “Since Indep­en­dence, whether it was the Congress or the CPI(M) and now the Trinamool, each government has cultivated the ‘minority’ votebank, because traditionally they vote as communities, rather than as individuals. Muslims, comprising 27-33 per cent of the population and still growing, is the largest chunk of the non-Hindu votes, and gaining access to this gives a party a massive advantage during elections.” Chief minister Mamata Bane­rjee’s allocation of monthly stipends to Imams, her donning of the hijab during Muslim festivals and other such gestures have been seen as ‘appeasement’. In contrast, the Hindu vote in Bengal has been non-religious and divided—based on iss­ues and ideology.

The BJP, on an aggressive, winning run of assembly elections since its landslide victory in the general elections of 2014, has been trying to consolidate those div­ided Hindu votes in Bengal. And it doesn’t take political analysts to connect the current spate of communal clashes (there were 58 incidents of communal violence in 2017; there were 27 in 2015) with the BJP’s attempt to arouse religious sentiment in the Hindu Bengali. “Political parties in the electoral fray in Bengal since independence never really offered the option of ‘Hindutva’ as an election issue,” points out Tarun Ganguly, an expert on Bengal politics. “So, even hardline Hindus never exercised their franchise on religion as an election issue. But, crucially, it is not that the state was devoid of such staunch supporters of Hinduism.” Indeed, the BJP has been playing up Bengal’s significant role in the development of Hindu nationalism, unfailingly naming Bengali religious icons, from Sri Ramakrishna to Swami Vivekananda in each election rally, not to mention Jana Sangh founder Shyama Prasad Mookerjee.

“The BJP is targeting the lower castes in rural areas, where panchayat polls will take place in May. This group is vulnerable to tall promises. They are being told that they have been suppressed for years and the time has come for them to feel empowered. But BJP is not telling them that they have been oppressed by upper castes. They are telling them that Muslims are their competitors. The reality is that Muslims are as downtrodden as them. Mamata Banerjee cares for both equally,” says Trinamool leader Rezzak Mollah.

The riots in Raniganj and Asansol help the TMC firm up its position, presenting the chaos as BJP’s handiwork.

“It is a fallacy to think that the BJP does not have followers in Bengal,” says Sanghamitra Choudhury, a BJP wor­ker. Other than Hindu Bengalis, she says, the BJP’s support base comprises the Marwari community and even a large section of the Bengali youth, who clutch on to its development agenda.

“The surge in our voteshare with every election is indication that we have gained a foothold..and are marching forward towards our goal of capturing power,” insists Dilip Ghosh, state BJP President.

Chakraborty, however, points out that the growing voteshare reflects only areas with higher concentrations of “religious-minded” Hindus, which does not translate into seats. “Unless it gains the Muslim vote, which will be impossible for the BJP, it will never be able to compete with Mamata.” 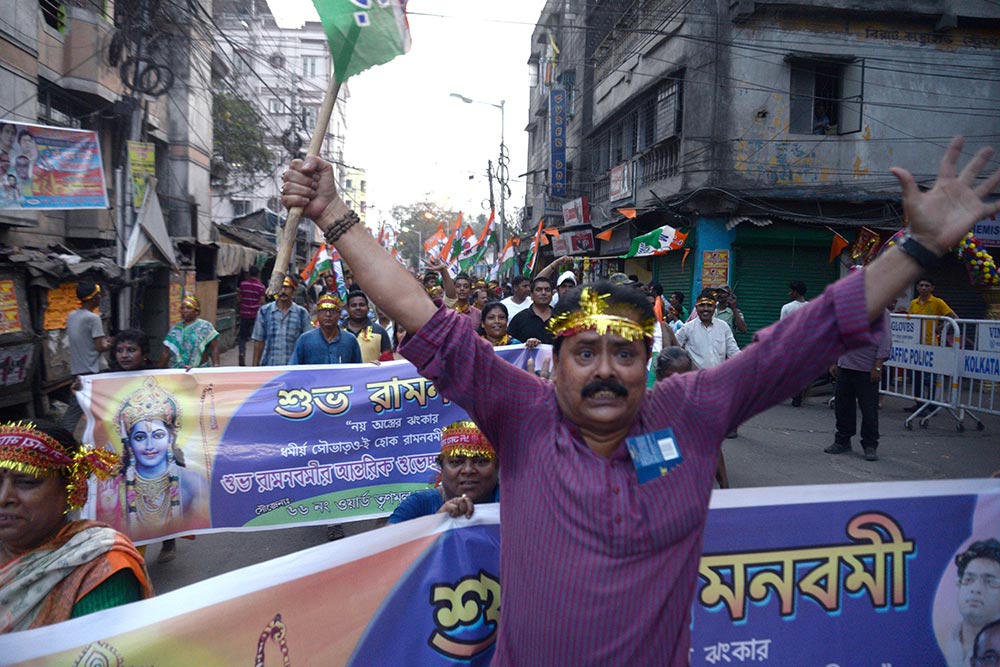 Not that the BJP has not realised this. Since 2014, the BJP has devised strategies to try to win over Bengal’s Muslims. From fielding candidates from the community in the 2016 assembly elections to indu­cting former TMC stro­n­gman Mukul Roy, known for his connect with the community into its fold, it has tried all. Still, the Mus­lim vote has been elusive. The party’s only hope is to consolidate the Hindu vote. With the panchayat elections scheduled for the first week of May, the aggressive Hindutva celebrations in Bengal is striving for exactly that.

While Trinamool leader and Panchayat minister Subrata Mukherjee called such attempts “a futile endeavour which will be rejected by the people”, a spate of pre-nomination violence related to the panchayat polls points to the TMC’s leaving nothing to chance. News cameras have shown BJP and other parties’ candidates purportedly being dragged out of DMs’ offices, beaten up, kicked, punched and slapped by alleged TMC goons. The BJP cried that not a single nomination could be filed, a charge helped along by Trinamool leader Suvendu Adhikari’s impolitic comment that they are aiming for an “opposition-free” panchayat polls. The comment has sent shock waves through political opposition.

Is this an indication that the TMC is worried by the BJP? The riots in Ran­i­­ganj and Asansol, in effect, allow the TMC to consolidate its position further, both among its suppor­ters and sceptics. The TMC would cynically use the riots to whip the BJP, telling voters that if it gains ground in Bengal, there will be many more such communal incidents, says a political analyst. “Trinamool is trying to get the attention of Hindus but at the same time it is trying to put the onus of the recent disturbances on anything other than the inadequate handling of law and order by her administration,” says BJP leader Chandra Kumar Bose.

That Trinamool is not completely confident that people would reject such Hindu religious feeli­ngs whipped up by the BJP  is evident from the gusto with which the party itself celebrated Ram Navami and Hanuman Jayanti. Ostentatious para­des, unseen earlier, were patronised by even party leaders and ministers.

BJP has tried to woo Bengal’s Muslims—fielding them in the 2016 polls and inducting Mukul Roy, who is close to them.

The result on the ground is the inevitable communal chasm between the two communities. In Raniganj and Asansol, ground zero of the recent communal cla­shes, raw emotions spill out openly. M.D. Taj, whose three-storey shoe store was burned to ashes, says, as tears roll down his sunken cheeks: “The Hindus may have lived with us for all these years but inside their hearts and minds they must have always hated us. Now we see that the ‘bhai-bhai’ feelings have been a sham.”

But many, such as a group of shopowners in Raniganj market, try to pacify those like Taj. “Look, there are bad people in each community,” says a shop owner. “Those who did what they did are thugs. There are hundreds of examples of each community coming to the rescue of the other. I was saved by a Hindu household myself.”

China, too, refuses to blame anyone. Then, she looks up in dismay. The roof has caved in, revealing the long bran­ches of an ancient banyan tree, which has thus far spread a canopy over hundreds of Hindu and Muslim families who lived cheek by jowl under its shade, as inseparably connected branches of the same larger community.

By Dola Mitra in Raniganj and Asansol