Another Uma tantrum is fobbed off, but for how long? Updates 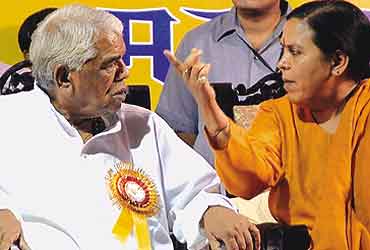 outlookindia.com
-0001-11-30T00:00:00+0553
An Uma Bharati "show of strength" can never be bereft of colour. So it was with the display her supporters put up in Bhopal last week. It left the BJP central leaders deeply worried. On the one hand, the sadhvi-turned-politician partly burnt her bridges with the RSS when portions of a letter she had written to sarsanghchalak K.S. Sudershan attacking top Sangh functionary Suresh Soni appeared in the press. Yet, there was a clear method to the madness: Uma was driving home the point that she would not be ignored or marginalised so easily.

Uma's latest theatrics ended in a temporary truce. She would hold her horses till the Bihar election was over. That done, her complaints regarding Madhya Pradesh chief minister Babulal Gaur would be addressed. The lady was also given an assurance that she would not be overlooked in any decision regarding a new chief minister (see interview).

The basic concern driving the BJP's strategy of containing the sanyasin by giving partial vent to her volatile brand of politics seems to be that the party cannot afford to have her do a Kalyan Singh in MP. For the parallels between the two most prominent OBC faces of the BJP are striking. Kalyan, former Uttar Pradesh CM, was also cut in the typical mould of a powerful state satrap. He was too much for the hierarchy-driven BJP to handle; he was forced to leave the party but not before he had played his part in the utter destruction of the BJP in the state. Though back in the party now, Kalyan is but a shadow of his formidable former self.

His kinship with Uma, however, is something that Kalyan has readily acknowledged. When Uma had first been projected for the chief ministership of MP, he had told Outlook: "She is like a sister to me. I have warned her that she will never be made chief minister even if she wins." In this statement of his lies the echo of what the OBCs in the BJP believe: that they are always out-manoeuvred in a party where decision-making rests in the hands of the upper castes. On a more candid note, perhaps, it's just that politicians with a mass base sit uneasy in structured parties like the BJP and Congress. Either way, there's no denying that among the major problems confronting the BJP is that its great "social engineering" project seems to be coming undone.

In spite of all those many spectacular public scenes she has made, Uma Bharati remains the unique figure in the BJP who taps the energy of the two most potent political currents of the '90s: Mandal and mandir. She won't be put down without a fight. It's also become crystal clear that if her relations with the BJP-RSS deteriorate further and she is thrown out of the party, she is quite capable of setting up a regional force of her own. A far more worrying scenario for the BJP is Uma carrying one-third of the legislators and splitting the party. Even though it is hard to conceive of her flourishing outside the parivar fold, she certainly has the potential to wreak irrevocable damage on the BJP.

It's premature right now to see Uma becoming an out-and-out rebel. Central BJP leaders say that the effort is to "contain and manage Uma". Meanwhile, there is a great deal of quibbling in the press and within the BJP over the number of MLAs who actually support her bid to reclaim the MP chief ministership. Close to 120 of the party's 172 MLAs in a House of 230 turned up at her Dussehra bash last week and 106 of them signed a letter expressing dissatisfaction with Babulal Gaur.

Her rivals in the state, however, have been making counter-claims. State BJP president Shivraj Singh Chauhan told Outlook: "Only 30-odd signatures on the memorandum were genuine. It contains signatures of many MLAs who were not even in Bhopal on that day." Still, political observers in Bhopal say that the quibble over numbers apart, the sadhvi has been able to make one point forcefully: even after a year in political exile, she has more MLAs with her than CM Babulal Gaur or Shivraj Singh Chauhan, himself a pretender to the Bhopal throne.

Chauhan had, in fact, emerged as the favoured candidate of the BJP's Delhi-based leaders. Uma's strategy seems to have been driven by the realisation that with a change of guard in Bhopal on the cards early next year, she must prevent Chauhan from claiming that post. Her preferred replacement would undoubtedly be herself. But she is also beginning to realise that she terrifies many of her party colleagues in Delhi. Hence she'll settle for a compromise. That "compromise" candidate, sources say, is Gauri Shankar Shejwar, a minister in the Gaur government. Till the next episode then.