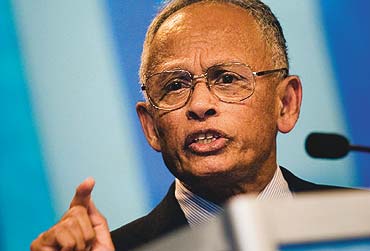 You have "challenged the status quo" on water? How would you explain that?

In the area of water development, there are many myths and fruitless discussions at present, including in India. Let me give you a few examples. During the past 12 years, international institutions have pushed heavily the concepts of integrated water resources management (IWRM) and integrated river basin management (IRBM). Very few people realize that IWRM is a 60-year old concept. While the international bandwagon on IWRM is very strong, surprisingly there is no agreement even on what it means. Yet the world now thinks this is the solution, whatever it may mean! No one has even asked the simple question as to why in 60 years we still cannot find a good example of IWRM at macro and meso levels anywhere in the world. It is safe to predict that concepts like IWRM or IRBM will not work in countries like India, even though these are the most "fashionable" solutions at present.

Similarly, there are now considerable unproductive discussions in India on issues like large dams or rainwater harvesting. These are not either/or solutions. Under certain conditions, in a specific area, large dams could be the best solution. Under different conditions, rainwater harvesting could be the optimal solution. In another place, both options may be necessary. In the real world, small could be beautiful, but it could also be ugly. Similarly, big can be magnificent but it could be a disaster. We need to examine the context within which the solution is to be applied. There is simply no universal solution that is applicable under all conditions. Those who propose such dogmatic and universal solutions are dead wrong.

What is the Biswas-Hansen formula?

The Biswas-Hansen report was prepared for the United Nations system to see how the water activities of the various UN agencies could be effectively coordinated. We proposed specific solutions, but the sad fact is that these agencies do not wish to be coordinated. They mostly want to do their own things, and talk of the need for coordination. If the will is not there, any coordination process becomes irrelevant. The situation has improved a little bit in recent years, but any real coordination between the various UN agencies in the water sectors still remains a distant dream.

What was the contribution of the UN International Water Supply and Sanitation Decade (IWSSD)?

IWSSD for the first time put the access to clean water supply and sanitation in the world’s political agenda. Tens of millions of people in developing world gained access to clean water and sanitation during this Decade, much of which would not have occurred without IWSSD. Though much still remains to be done in this area, the general consensus has been that the Decade was a great success.

Why and how should developing countries look at water management differently from developed countries?

There are many reasons as to why water management should be different in developing countries. Let me just give you one example. Annual rainfalls in Delhi and London are somewhat similar: the difference is around 15 percent. However, in London, it rains all over the year, but, in Delhi, much of the rainfall occurs in about 90 hours (not consecutive) during the monsoon. Areas having regular rainfalls over the year need a completely different water management strategy compared to places like Delhi, where the main focus has to be how to collect, store and then use this vast amount of rainfall over a very short period in any year. The technical approaches for two such radically different climatic regimes have to be very different. It is a curious irony of fate that developed countries are in temperate regions and developing countries are in tropical and semi-tropical regions. Because the climatic regimes of developed and developing countries are different, their water management practices have to be different as well.

In addition, economic, social, political, institutional and environmental conditions are different, and levels of corruption are different. Thus, even among developing countries, what works in India may not work in Brazil and vice versa. There is simply no one single approach for water management for a very heterogeneous world.

What does India's water future look like? Are we heading for war and severe scarcity?

The main problem of India is not scarcity of water, but its mismanagement. For example, technically and economically, there is absolutely no reason as to why residents of Chennai, Delhi or Mumbai cannot have a reliable, clean water supply on a 24-hour basis. Water mismanagement is endemic in the country. Sadly, even water management in Phnom Penh, Cambodia, is significantly better than in Delhi or Kolkata. Very few people realize that some 40 to 60 percent of water pumped from reservoir never reaches the targeted users. Even the quantities that reach the users are not being used efficiently. No wonder the country faces chronic water problems! Even Cherrapunji now has a water problem for certain months of the year!

I can sit down with any water authority of an Indian mega-city, and work out a detailed programme for an efficient and safe 24-hour water supply, at a very affordable economic cost, by simply improving the existing management practices. Whether there is political and bureaucratic will to solve these problems, is another issue. India should not face any problem in the future if its water resources are managed efficiently.

How does subsidisation, prevalent in many developing countries, affect water resources?

Subsidised water cannot contribute to efficient water management. If water is highly subsidised, people will not use it efficiently. This is, unfortunately, a fact of life. People must pay for having access to clean water in their houses on a 24-hour basis, as well as for collection, treatment and disposal of wastewater. There is simply no other alternative. The present block tariff system that is practised in many parts of the world, where an initial lifeline block of water is provided to all households at highly subsidized rates, is not efficient in terms of economics or equity. Generally, such tariffs have ended up in subsidizing the rich and penalizing the poor, exactly the reverse of what was intended. In addition, it has reduced the income of the water supply corporation, and has discouraged water conservation for the entire population, leading to "lose-lose" situation. What is needed is a very targeted subsidy for the poor, but the subsidy should be structured in such a way that it would encourage water conservation. This is what Singapore has done very successfully. India can learn much from the Singaporean experience.

Is privatisation the solution for solving the distribution problems in developing countries?

Our analyses show that in many parts of the world, private sector has improved water management practices significantly. Equally, I can give examples where private sector has worsened the services. Thus, the debate between public and private sector is basically a red herring. We should go for any alternative that will provide a reliable water supply economically and equitably, without any dogmatic baggage.

Privatisation usually leads to rise in/imposition of water charges and are opposed by poor country citizens. How to avoid that?

If the objective is to provide good quality water to all, consumers will have to pay for it, irrespective of whether it is provided by the public or private sector. If the water is free, or heavily subsidised, there will never be enough water and very few consumers will practice water conservation. With respect to how to provide clean water to the poor, there are many alternatives that India can explore. Countries like Chile or Singapore have solved these problems. India could do well to consider such practices.

What do you think of India’s sporadic privatisation efforts?

I come to India, for a variety of professional and personal reasons, once every six months. I am a member of the Expert Advisory Group of Kalpasar Project of the Government of Gujarat and trying to develop a future-oriented water management course in my alma mater in the IIT, Kharagpur, with support from the Asian Development Bank. I met with the Prime Minister and Water Minister when I was in Delhi in July. Both are remarkable individuals with clear grasp of the water problems facing the country. If we can ensure efficient water management through human resources development, India should have a water-secure 21st century. I am cautiously optimistic that this is doable. I also think we need to move away from the dogmatic debate of public vs private sector. We should consider a public-private partnership, where provision of water services stays in public hands, but with extensive outsourcing if specific activities to local private sector. These activities could range from IT requirements, meter reading, billing, leak detection and repair, fleet management. Anything that the local private sector can do better than the public sector should be outsourced. This could be a viable model for India.

What is the worst crisis area in India--groundwater, urban water supply or irrigation?

Regrettably, the bad news is that groundwater, irrigation and urban water supply in India are all in bad shape because of mismanagement over decades. The good news is that all these can be overcome, certainly within our lifetime, given the political will and an informed citizenry that realizes that water management in the country needs radical overhaul, and sooner the better.

A shorter version of the interview appears in the magazine.

Are You Still There?