A trickle of precious gold at the Asiad could herald a gush of metal. Remarkably, our athletes are backed by self-serving official apathy, callousness and greed. 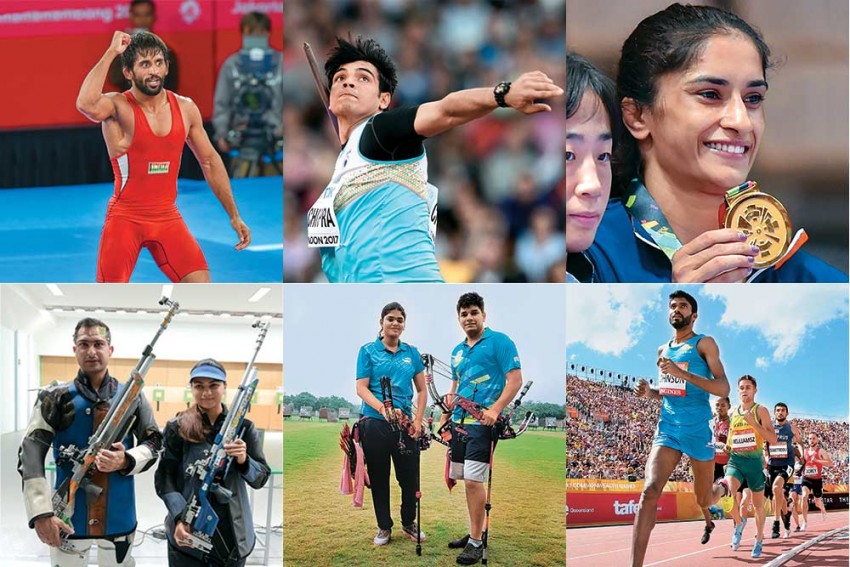 When it comes to sports, India is fortunate that its athletes find a way to overcome the impediments that its officialdom throws in their paths—whole areas fra­ught with politics and unprofession­alism. If India had won 10 medals (3 gold, 3 silver, 4 bronze) by the end of the third day of the Asian Games, it has been possible in spite of official bungling, due to athletes’ own talent, resilience and steely determination. The government does provide facilities and exposure, but it’s a mite compared to the odds athletes face.

Many of the stories of the Games medal winners so far, and those who may or may not win, are tales of victories carved thr­ough adversity. The story of 65kg freestyle wrestler Bajrang Punia, who won India’s first gold in Jakarta and ace shooter Ravi Kumar, who opened India’s medal account at the Asian Games in the mixed 10m air rifle bronze with Apurvi Chandela, are two of them.

Even the feat of 16-year-old Saurabh Chaudhary, who created a sensational upset in the men’s 10m air pistol to shoot gold, is one of trumping against odds. On his Asian Games debut, the shy Meerut-based teenager beat legendary Jongoh Jin of Korea, a four-time Oly­m­pic gold medallist, and two-time world champion Tomayuki Matsuda of Japan, to climb atop the podium at Palembang’s Jaka­ba­ring shooting range on August 21. Saurabh first topped the qualification round with a superb 586/600 points and then stu­n­ned everyone in the finals with a Games record score of 240.7 points. “I didn’t think of who I was shooting with, whether they were Olympic or world champions,” says Saurabh, who had won gold at the Junior World Cup in 2018.

Two days before Saurabh’s finest hour, the redoubtable Bajrang Punia—back pain threw him out of the mat for eight months in 2015, a towering adversity—clinched the 65kg freestyle gold.

A day earlier, wrestler Vinesh Phogat, whose Rio Olympics campaign was tra­gi­­cally cut short by a knee injury, sta­mped her authority on a grand comeback—she won the Commonwealth Games gold in April too—to win the 50kg gold in the women’s category. The 23-year-old, who had won the 48kg bronze in 2014, thus became the first Indian woman in the 67-year history of the Asian Games to win a wrestling gold. 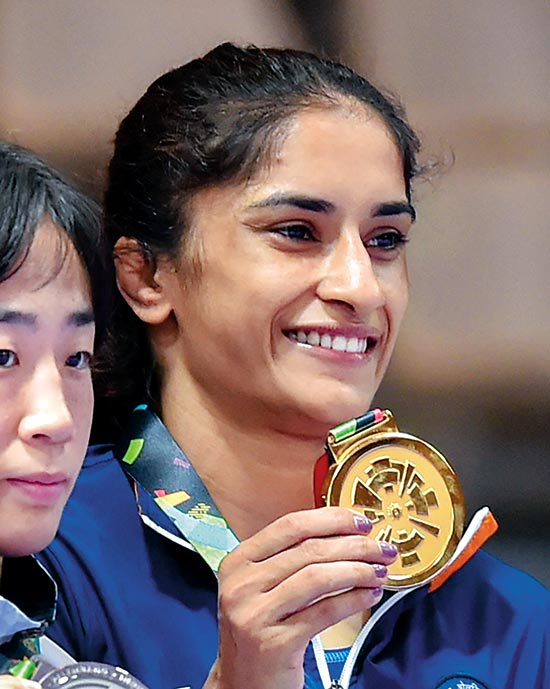 Photograph by PTI
Vinesh Phogat (above) won the 50 kg gold in Jakarta. She is the first Indian woman wrestler to win a gold in the 67-year history of Asiad.

Despite these sterling achievements, the athletes’ preparations had been far from ideal. Most never speak out for the fear of being snubbed or dropped, but Vin­­esh openly complained about the pro­b­lems she and fellow wrestlers faced dur­­ing the preparatory camp at the Spo­rts Authority of India’s (SAI) Lucknow cen­­tre. “If you want an Olympic medal, you have to provide matching facilities. We train irrespective of the conditions, but it becomes a cause of injuries. The wrestling hall was so hot even in this rainy season,” she had said before the Asiad.

Besides that, there was the sordid drama about the selection procedure, with disgruntled athletes moving courts across the country. Until a week before the August 18-September 2 Games began, the final list was still being drawn up. As late as August 10 forenoon, the file seeking clearance of the athletes and officials hadn’t been cleared, with the sword of uncertainty ominously hanging over some athletes as well as sports disciplines. “The file from the IOA has just come to us, right now, a couple of hours ago,” sports minister Rajyavardhan Singh Rathore told Outlook in an exclusive interview on August 10. It was cleared by late evening that day.

Read Also: Neeraj Chopra: Under-20 Javelin Record Holder Is The Best Bet To Win A Medal

Hilariously, the Indian Olympic Asso­CIA­tion (IOA) had twice issued a ‘final’ list of athletes. But fear not; Indian sports wasn’t in danger of banishing underhand official games. So, as politics dug its vic­ious talons, a third list, comprising 572 athletes, was cleared with some more changes. This list had 31 athletes more; a gigantic team of 225 officials/coaching and support staff was also cleared.

Here’s another bewildering example of India’s lackadaisical approach to preparations for competitions like the Olympics and the Asiad. On July 28, the IOA preparation committee summoned all the federations of competing sports to “review preparations” under the “chairmanship of IOA secretary-general Rajeev Mehta and preparation committee chairman Lalit Bhanot”. Remember Bhanot? He was jailed in the 2010 Delhi Com­m­on­wealth Games corruption case. Not an office-bearer in any sports federation, he was bizarrely included as a representative of the Asian Athletics Asso­­ciation, of which he is V-P. People who know IOA politics say Bhanot’s proximity with IOA chief Narinder Batra got him the post.

Shockingly, Mehta himself was absent at the meeting, while none of the eight points on the agenda was related to ath­­letes’ preparations. “Bhanot didn’t ask us a single question about athletes’ preparations. He just said no one should steal tow­els and breaks locks, etc. at the Games Village in Jakarta…that nothing controversial should be posted on Facebook…things like that. Evidently, IOA officials are only worried about votes,” says an official who attended the meeting.

Asked about the reasons for the inordinate delay in announcing the names of athletes, an unconvincing Rajeev Mehta says, “Several court cases were there—handball, taekwondo, kayaking, canoeing, yachting—so changes had to be made due to court orders…. Also, the government takes two-three days to clear names.”

Apart from sporting powerhouses like China, Japan and the Koreas, India will face a challenge in martial arts. As many as 92 gold medals are at stake in eight such sports, such as pencak silat, kurash, sambo, karate, wushu, and ji-jitsu. Since gold medals determine a country’s position, India, which is competing in six martial arts, can’t expect to better its 2014 show without performing well in these.

Additionally, sports administrators worry that even if India betters its 11-gold tally of 2014, it might fall from the top-10 bracket as martial arts masters Indonesia, Thailand, China and Japan are expected to make a clean sweep of those medals. Rathore was not forth­com­ing on this. “The parameters of com­­parison—number and type of eve­nts—are not the same every time, so a comparison is unfair. How­ever, we are creating an environment where Indian martial arts are lifted to greater heights,” he said.

In another setback, eight events in arch­ery and shooting, in which India won eight medals (one gold, two silver and five bronze) in 2014, are discontinued. Never­theless, the 28 shooters and 16 archers are expected to overcome that obstacle.

India can be competitive in archery, ath­­­­­­­­­­letics, badminton, boxing, hockey, kab­­­addi—India have clean-swept all previous golds—sho­oting, squash, tennis, table tennis, weightlifting and wrestling. Amongst the 36 sports India is competing in, it has never won gold in canoeing, cyc­ling, gymnastics, judo, taekwondo, volleyball, weightlifting and wushu. In gym­­nastics, star performer Dipa Karm­a­kar pulled out of the team and vault finals after her knee injury flared up, but will take part in the balance beam finals.

Much is expected from athletics events, which begin on August 25. Hima Das, the under-20 world champion in 400m, can give her rivals a tough challenge in 200m, 400m, and mixed relay. In badminton, Kid­ambi Srikanth, as ever, is the golden hope, along with old favourites P.V. Sin­dhu and Saina Nehwal. Vikas Krishan (75kg), Shiva Thapa (60kg), Sonia Lather (57kg), and Sarjubala Devi (51kg) are medal prospects in boxing, while archers Deepika Kumari (recurve individual, team and mixed events), Abhishek Verma and Jyo­thi Surekha Vennam could have a podium finish.

Hockey is a sentimental favourite, but expect a few medals from squash, in which India won four medals in 2014. “My prospect of winning an individual medal is bright. We’d love to defend our men’s team gold,” Sourav Ghosal, win­­­ner of the singles silver in 2014, tells Outlook.

In table tennis, the best bet is the 2018 CWG gold medallist Manika Batra, along with Sharath Kamal Achanta in the men’s category. Beyond Bajrang and Vinesh, fans can hope more from the 18 wrestlers and four weightlifters.

While medal prospects were automatic picks, the IOA and some federations ind­u­lged in shameful behind-the-scene she­­n­­anigans. The perennial dynamic of give-­­­­and-take and power equations res­ul­ted in the aforementioned three athlete lists. A gigantic 30-member canoe-kayaking squad, a 24-member bridge team, a 16-strong handball men’s team—its federation moved court for its inclusion—and three sport-climbing players were added late, after bitter exchanges between the IOA, the ministry and federations. Thus, sambo and triathlon were axed, while the football federation’s plea to incl­ude its men’s team was ignored, reportedly beca­use it is not part of the dirty IOA politics.

There was heartache among athletes who were dropped after selec­tion. “I’m not sad because I was not selected, but because India has ‘lost’ a gold medal—my coach and I were confident. I’ve cried a lot,” one athlete tells Outlook.

An official whose sport was dro­p­ped fumes: “In selection, there was 98 per cent vote politics by IOA and two per cent sports politics. Every­thing dishonest—nepotism, pressure from the influential, political pressure—was indulged in.”

The IOA picked tainted officials too. One team manager has a rape charge against him pending and is out on a bail granted by the Ranchi High Court. Ano­ther, a Member of Parliament, has multiple criminal cases registered against him, while a third faces a CBI probe in a disproportionate assets case in the 2010 Delhi Commonwealth Games scam.

Against this seemingly impregnable wall of negativity, if Indian athletes put up a good show in Indonesia, they alone des­­e­rve a large chunk of credit, not those who are responsible for creating this mal­­o­d­orous morass for them to wade through.

What Truly Is To Be Done?