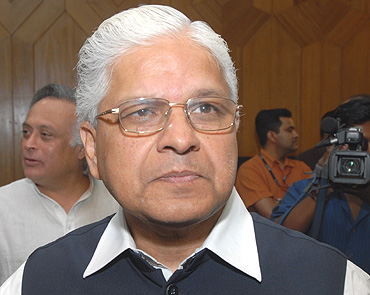 For the voter it’s a choice between a progressive, resurgent and modern India anchored in the traditions of liberal nationalism that the Congress represents as opposed to the BJP’s narrow, divisive and backward-looking agenda.

A strong leader need not be loud. The BJP’s strategy was to make this a Dr Singh vs Advani affair, but that has boomeranged.

So how did this transformation from technocrat to aggressive leader take place?

From staking his prime ministership on the nuclear deal to a steely leadership post 26/11, Dr Singh has demonstrated his strength.

But has the departure of allies hurt the Congress’s electoral prospects?

The NDA implies Nationally Dwindling Alliance. Instead, our allies have pledged allegiance to Dr Singh. The Congress and UPA are ushering in a strong, stable and secular government.

Is job loss in the recession a major issue?

It is and will remain a priority. We’ve given three stimuli packages and schemes like the NREGA and Bharat Nirman will continue.

The quality of debate in this election seems to have fallen sharply.

When you hear the kind of language used in Pilibhit, the political discourse suffers.

The Mumbai attack, the bomb blasts... didn’t the UPA fail to provide security?

The NDA failed during Kargil, Kandahar and Operation Parakram. We’ve brought in a strong anti-terror law, set up the national investigative agency and overhauled our intelligence.

So will the government bring in more accountability in our security apparatus?

I believe any dereliction of duty in the fight against terror should be accounted for.

How will the Congress fare?

We will emerge as the single largest party.

Will Rahul join the new government?

The party will decide. He’ll make significant contributions to governance if he joins.