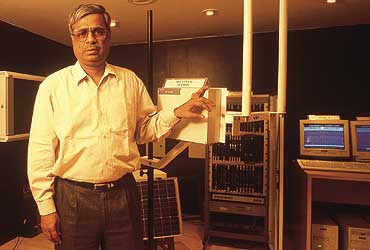 He’s a technocrat who firmly believes in bringing his work to the masses. The iit-Madras professor heads the Telecommunications and Computer Networking (TeNet) group, his pioneering efforts being in the field of rural telephony and connectivity. His aim: to bring modem-free connectivity to villages at a bearable cost to the end-user. "A phone line in India cost Rs 40,000 a few years ago," says he. Today, thanks to technologies like Wireless in Local Loop (WiLL), of which TeNet has been the pioneer, or the nascent Fibre in Local Loop, the costs have been halved. His pet project is being implemented through a TeNet-incubated company called n-Logue in the Cuddalore and Madurai districts of Tamil Nadu, Dhar in Madhya Pradesh and Bagru in Rajasthan. Jhunjhunwala is hoping for a million subscribers in three to four years. The end-product is not just a phone-line but a phone-cum-internet. An n-Logue kiosk consists of a wireless wall-set, a phone, a 35 kbps multimedia PC and an Indian language software. All for that same Rs 40,000.