Ashes On The Hudson

To remember is to relive the trauma. Of reconstructing the event and wishing it had a different end. But death has a finality that sooner or later one has to accept. And the families who lost their dear ones to the tragedy—a sister, a brother, a husb 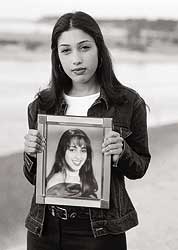 Eva Narula on sister Manika, 22
There is an urgency to Eva’s words, a rushing forth of moments past. "This year’s been a lot about denial," says Eva. "We can’t face up to it."

We are in a booth at Martino’s, a pizzeria in King’s Park, an hour outside New York City. Eva fusses over a paper napkin, rolls it up, tears a piece of it, rubbing it between her thumb and index finger like raw cotton, until she produces a thin braid.

Eva waits for her younger sister Manika or Mona to show up any day now. After all, she calculates, it’s impossible Mona could have made it to work by 8.48 am, when the first WTC tower was hit. The train pulls into Penn Station at 8.08 am, and it takes another 20-25 minutes to take the subway downtown. On September 11, though, their train arrived at Penn Station at 8.23 am. Eva dashed off without the usual hug. Mona, she reasons, would have taken her own time to make the transfer. And then, at the WTC, it would have taken her five or ten minutes to fish her ID card out of the handbag. "She was so messy. That was the only thing we fought about."

Earlier, we had stood on a small cliff, overlooking the Long Island Sound. Locals call it The Bluff. Eva had pointed to the shoreline below, saying, "We would go down there and stand on the plank. It would rock back and forth, so we felt like we were on a boat."

The Bluff was their retreat, somewhere they could chat or even run away to, as Mona had for one brief moment, when she was 16. Mona wanted to be a star. The next Madhuri. Cantor Fitzgerald was where she made a living, in equities, but whenever possible, she would dance. "We’d be a duet at all the parties. She’d wear the bindi and chudiyan, everything."

Mona would spend her weekends at a beauty parlour, Hamara, learning the trade. Her father had told her he’d buy her a beauty salon, and Mona had hoped to leave Cantor in October.

Eva swats at the gnats in her face. "We hate bugs. We’re so scared of them," she says. "But she’d get really spiritual and talk about what it all meant. And I’d say ‘Shut up, Mona.’"

Mona and Eva were like twins, though four years separated them. They shared a bedroom at their parents’ house, shared clothes, went together to the store just to buy milk. "We all knew Mona was everything for us," said Eva, as we drove away from The Bluff. "She was our raunak—the happy, jolly, fun type of energy. That’s what she was."