Always provocative and irreverent, Souza was the enfant terrible of Indian art and his colourful career was interesting to the bitter end... 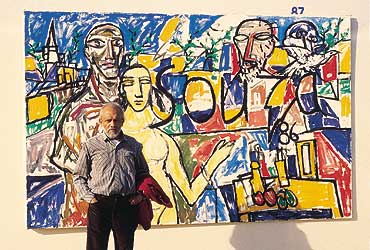 outlookindia.com
-0001-11-30T00:00:00+0553
During a discourse on the varying approaches of artists painting the female nude, I once asked Souza why he painted women with such exaggeratedly large breasts. The incorrigible Souza replied: "If you knew the women, I know you'd realise that this is no exaggeration!" This small, unhandsome, untidy man seemed to have insatiable appetites, and a series of liaisons (with ample-breasted women of younger and younger vintage as he grew older!). Always provocative and irreverent, Souza was the enfant terrible of Indian art and his colourful career was interesting to the bitter end.

Born in Goa, Francis Newton Souza spent a whole lifetime repudiating his Catholic roots and yet some of his most powerful paintings depicted Christ as in his famous Last Supper. Always a rebel, from the time he was kicked out of Art School, through his solo exhibition where a full frontal male nude shocked Bombay society and the police had to intervene, Souza went on to found the Progressive Artist's Group whose landmark show in the '50s was to shape the future of contemporary Indian Art.

The famous art critic John Berger wrote: "He straddles several traditions but serves none, his work lacks grace and has to make up for a lack of certainty with a clumsy, individual power. But at the same time, it seems to me to contain an imaginative vision which is truly moving."

In his last months, he was painting in Bombay as prolifically as ever and continued to utter often blasphemous but never dull bon mots, never raising his rather soft voice. We met in Bombay in January and had a long chat. He accused me once more of being the "unattainable princess" and, of course, I laughed it off.

He left for Goa the next day. Was it a farewell visit to his birthplace? His sudden death on his return to Mumbai a month later has left our community of artists bereaved, each in our own way. With the passing of Francis Newton Souza, The One Who Dared, gone is the last of the great eccentrics.