The art galleries are getting bigger but is contemporary Indian art all that big in the West? 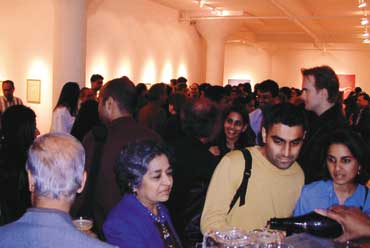 outlookindia.com
-0001-11-30T00:00:00+0553
For the most part, the recent opening of the Arts India gallery in New York's Chelsea district was a low-key affair. No doubt wine was served, as were samosas. But there wasn't the hype you would normally associate with a gallery that claims to be the largest outside of India. Unlike shopping malls or bodybuilders, art galleries rarely make bigger-is-better type of assertions. No wonder, Arts India's boast has sparked off a controversy, goading a leading rival to contest its exalted claims.

"I suppose they can say whatever they want, but I wonder what criteria they're basing that on," asks Shari Halter, co-founder of the Bose Pacia Modern, also in Chelsea, and rated the biggest before Arts India made its splash. "I'd personally be hesitant to make that claim if I were them—maybe after they've been in the art world a while longer they'll understand that gallery size is more than the sum square footage of your real estate. And just out of curiosity, did they come measure our space?"

But for Dr Prajit Dutta, a Columbia University professor who helped found the gallery, there is enough to back up the claim. "In terms of area, I'm fairly sure we are the largest," he says. "Bose Pacia too has a large area, possibly comparable in size, but their layout doesn't allow the long-walled, museum-like floor configuration that we have."

Whether the claim is accurate or not, being the largest Indian gallery in the West is not exactly difficult, simply because there are so few of them. Last fall, Admit One, founded by Sushil Puria, closed down, two and a half years after opening, leaving Bose Pacia Modern and now Arts India the only major spaces in New York to focus on contemporary Indian art.

Yet the controversy over who's the biggest has many people express optimism about the prospects of Indian art in the West. The existing galleries are the pioneers, hoping to harness the frisson of excitement about Indian art for rich dividends in the future. Says Halter: "We've been doing this for eight years and the undercurrent of people talking about Indian art is unprecedented. It's never been a more exciting time."

Financially, pundits say, Indian art remains a good investment as it's still fairly undiscovered. In difficult economic times, when collectors are weary of plummeting stocks and are increasingly concerned about making a good long-term investment, the pressures of finding a bargain rise. "Across the board, the market is very strong," says Edward Wilkinson, director, Indian and Southeast Asian Art Department at Sotheby's, New York. "Those who collect art in general are becoming more aware of Indian art as it's still cheap compared to European art, and there's incredible room for growth."

Even aesthetically, Indian art may finally be gaining a toehold in the market. "I think Indian art is unique for its colours," points out Dr Dutta, "much more vibrant than the 'average' American palette, and also unique for its mix of the traditional and modern, often in the same canvas. There is perhaps a little less of the avant garde but that often translates into more of an emphasis on painting rather than installations—which I think is what art-buyers in any case prefer."

What Indian art lacks in the West is star power. While a number of artists have made strides, no one has come out of the ranks and crossed into the mainstream with a burst of sustained attention. "I was in New York and I was visiting the galleries in Chelsea, and I see a lot of very good work," gushes Alka Agrawal, director of the Patricia Faure Gallery, Los Angeles. "It's a shame they don't have an international presence."

But there are artists who have been selected for prestigious international exhibits. Atul Dodiya featured in the Tate Modern's show in London, and Rina Bannerjee, known for her sculptures and tentacle-like installations, was selected for the Whitney Museum's biennial in New York in 2000.

"It needs to break into broad international appeal," says Wilkinson. "Ninety-nine per cent of this market is driven by wealthy expat Indians. The name M.F. Husain is not known to anybody outside of collectors of Indian art. Also, while Indian miniatures are unique, contemporary Indian art is seen as following European art schools."

Agrawal thinks that such a view is extremely outdated, a hangover from Raja Ravi Varma and earlier artists who may now appear slavishly faithful to western styles. "Today, I don't think artists in India are—or should be—following western trends at all," she argues. "Indian contemporary art tends to be more figurative and in a genre of its own. This style will take time to be appreciated and followed in the West, but I think ultimately it will be. Atul Dodiya is a great example of this. Western art tends to be more conceptual, stressing on a thought or idea with non-traditional materials like language, performance and film."

Others, though, are sceptical of its crossover appeal, given the stereotypes that linger within the western view of India. "My impression is that it'll be extremely difficult for Indian contemporary art and artists to break into the 'mainstream' of world contemporary art due to the persistence of traditional, orientalist, and rather exoticised conceptions here about the visual form that Indian art should take," says Ravinder Bhalla, a New Jersey-based attorney who has collected art for a number of years. "When people in the West think of 'Indian' and 'art', these terms invariably conjure up images of exotic deities, illustrations found in the Kama Sutra, and other ancient images."

However, the fact that a body of Indian literature has achieved so much recognition in the US is considered reason enough to be hopeful. "I think the fact the doors have opened in books and films means the doors will open for art as well," says Halter, who has strong expectations for Bhupen Khakar, Arpita Singh and Jitish Kallat, among others. "Dodiya is, I think, going to be huge. He paints in a realistic style but he's constantly calling on Indian history and places himself in the picture so self-consciously. The world, I think, is ready to have that kind of voice heard."

Of course, it takes a number of real-world factors for these voices to be heard. One is an increasing number of well-curated, solo shows. The difference between a hodgepodge exhibit and a really focused one, explains Agrawal, is in the reviews an influential critic may write. "You can't bring a good show in a suitcase and expect critics to take notice," says she. "People read The New York Times and the Los Angeles Times and read what critics recommend."

What makes things worse for Indian artists is the total lack of government support in India that might help them attract the attention of western buyers at international art fairs. At the Los Angeles International Art Fair, a number of countries sponsor the shipping costs of art as well the travel expenditure of top artists."People always ask me why there aren't any Indian artists," says Agrawal. "Fact is, the Indian government is never involved."

Finally, it may be the removal of its ethnic baggage that might make Indian contemporary art succeed. Whereas artists of the '90s were strongly defined by a rigid, multicultural categorisation, that approach has now become more fluid. When Bose Pacia Modern moved from Soho to nearby Chelsea, one thing they eventually dropped was the suffix 'Contemporary Art of India'. According to its owners, the term had served its purpose. "It's an attempt not to ghettoise the art, avoid pigeonholing it and say it's something else," says Halter. "It's not something else. It's art."

'It's The Age Of McDonald's Booksellers'