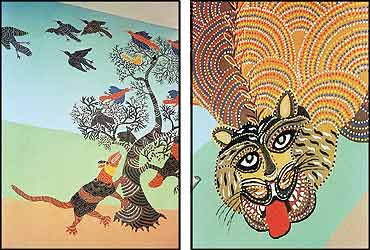 outlookindia.com
-0001-11-30T00:00:00+0553
The death of 39-year-old Jangarh Singh Shyam, one of India's most inventive Gond painters from Madhya Pradesh, in faraway Japan earlier this month was indeed a grim reminder of the growing trafficking of unsung artists worldwide. Just like his life and paintings, Jangarh's death too almost went unnoticed—when he hanged himself in his room at the Mithila Museum at Niigata Prefecture, a village north of Tokyo, his family back home in MP had to fight a lonely battle, before the Indian government intervened, to even get his body because the museum found the transportation too "expensive". But before that, nobody could hear the talented artist's pleadings—he had already completed three months at the museum and was feeling isolated and lonely, pining to return to India once his term was over. But the museum authorities couldn't care less. He was eventually promised to be "sent back" within 15 days, but his hopes were dashed when his visa was instead extended by another three months. Depressed, Jangarh couldn't do anything but end his life.

Jangarh's fate has once again revived the bitter memories of the early eighties, when a pony-tailed, fortysomething Japanese, Tokio Hasegawa, backpacking through Bihar in search of folk music, stumbled upon the animated paintings of Madhubani artists. He realised their worth and soon set up a lucrative business by importing these priceless paintings to Japan. The Mithila museum followed at Niigata and many Madhubani and other tribal artists were paid to come and paint for the museum. But the contract was lopsided in Hasegawa's favour—he would pay Rs 12,000 to the artists every month in return for all their work, which he would later peddle at exorbitant prices to art lovers.

All this could be avoided only if tribal artists like Jangarh got enough recognition at home. The master painter himself had made a long journey from his native village to Jabalpur in the early '80s as a 16-year-old when the late artist, J. Swaminathan, was so impressed by Jangarh's paintings on the wall of his home in Patangarh village that he encouraged him to come and paint at the Bharat Bhavan in Bhopal. Jangarh stayed on in the city even as his fellow artists went back disappointed, unable to adjust to the din and bustle of city life. For Jangarh, the exhilaration of tubes of paint and paper, and the company of artists like Swaminathan was worth anything.

Many of the young artist's magical works reveal these powerful dualities—the freedom of living in the city and the hubris of it. His creativity is evident at the new Charles Correa-designed Bhopal Vidhan Sabha. The stuffed tiger strung diagonally across the wall, much like the trophies of hunt found in old British clubs, seems animatedly alive. The bold areas of dark and light on the body and the hatched fish scales make it look as if it is in perpetual movement. Unexpectedly, the mask-like head stems the tide, curbing the leaping movement of the body. In contrast, a man-made object like the aeroplane is reminiscent of a giant humming bird—its colourful body seem to have a life of its own as it soars through space.

But many of these tribal artists have failed to come to terms with the dichotomy of their existence in an alien environment. Says Jyotindra Jain, director of the Crafts Museum in New Delhi: "The tribal artist is free (often forced) to live within or in proximity to the modern, industrialised environment. Here he may wear a wrist watch, commute on a motorbike. .. but if he wants his art to be 'recognised', none of this should find expression in it." And for Jangarh, his talents proved fatal in a foreign city.

His death has at last prompted the artists' community to seek justice for the young artist and his family. At a meeting organised at the Crafts Museum after his death, M.F. Husain, Manjit Bawa, Nirmal Verma and many other artists, writers and art lovers appealed to the authorities to protect tribal artists from being exploited by foreign agencies.

Till that happens, Jangarh's creations will remain painful reminders of his absence—the wiggling tortoise, the writhing snake, and even tree leaves, they all seem to be in perpetual motion. There was never anything still in his works. And in this very movement remained his perpetual presence.