Peace suffers another knockout as Sharon decides to expel not only terror but also Arafat from Palestine, Labour begs to differ. 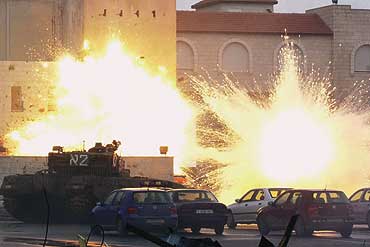 outlookindia.com
-0001-11-30T00:00:00+0553
When Israeli tanks began rolling into the West Bank town of Ramallah—the undeclared capital of the Palestinian Authority—on the night of March 28-29, 41-year-old schoolteacher Abu Yusuf Anabtawi and his wife heard frantic knocks on their bedroom door. Standing there were their three daughters, trembling in fear as the sound of machinegun fire tore ruthlessly into the silence of the night. Anabtawi tried to calm his daughters, but the distant thunder of the tanks continued to inch closer. By 3 am, they were in the street and the daughters could sense their father's fear.

Five days later, neither Ramallah nor Anabtawi had recovered from the shock of watching the Israeli Defence Forces (IDF) mount their biggest military operation after the Lebanon war two decades back. Anabtawi told Outlook over the phone: "We cannot believe the number of tanks the Israelis have. There is at least one tank in every street of Ramallah. They regard every Palestinian as an entire Arab army and every Palestinian city as an entire Arab country."

As part of the military mobilisation, Israel has ordered 20,000 reservists into the alleys of West Bank towns, hoping to hunt down militants and frighten the populace against supporting them. Hours before the IDF was to sweep through the town of Tul Karem, Hassan Khreisha, a deputy of the Palestinian Legislative Council, was a picture of stoic fatalism. He shrugged away the military operation saying, "Being alive or being dead is the same to us."

The IDF, understandably, didn't face too much resistance in Ramallah. Its elite force broke through the headquarters of the Palestinian Authority and confined chairman Yasser Arafat to his office. With Arafat are about 200 people, including some 50 peace activists. One of them, a German lady, was quoted as saying that Arafat had become weak and now spoke haltingly about his past.

No Palestinian believes Arafat will leave Ramallah. "He said that he wanted to meet his Creator as a shahid. He cannot take these words back," says journalist Mohammad Nubani. The Israeli operations have in fact enabled Arafat to recover some lost ground. In choosing to share in the plight of his people, Arafat has managed to counter those who had accused him of jetting around the world even as his people offered tremendous sacrifices.

Take, for instance, what Islamic Jehad leader Ramadan Shallah told Al-Jazeera: "Arafat must now commit martyrdom. Only this last service will revive the Palestinian struggle." Arafat was quick to respond, repeatedly expressing in a clutch of sneak interviews his desire to become a martyr for the cause of Palestine.

As Arafat remains sequestered in his office, Ramallah—like other towns—has been reeling under Israeli attacks. There's anger and shock at IDF operations. Says Samir Rantisi, political advisor to Palestine information minister Yasser Abd Rabbo: "Israelis have devastated Ramallah, the most beautiful and modern of all our cities. I can't understand what motivates the Israelis. Naked revenge? What has happened to them? We know the IDF to be a professional and disciplined army, but they are now killing people in cold blood, looting supermarkets, and destroying everything on their way."

Rantisi also holds wrong Israel's claim that it launched the operations only after the Palestinians rejected US envoy Anthony Zinni's new proposals to declare ceasefire. "It's not correct," thundered Rantisi. "What they offered us was a surrender plan. They demanded that we dismantle the tanzeems (militant outfits) and Aqsa brigades, and that only they were to decide whether their conditions have been met."

At the moment, it is difficult to get a precise death toll. But Ramallah's first common grave had 13 people buried in the yard of Ramallah hospital earlier in the week.Reports of casualties continued to trickle in from Nablus and Jenin, a militant stronghold that Israelis have invaded six times in the past 18 months, as well as Bethlehem.

The civic infrastructure too is strained. With the main pumping station destroyed in the Israeli shelling, large parts of Ramallah are facing acute water scarcity. Says Nubani: "Irregular power means the refrigerator can't work and our food is spoiling. Even when the curfew is lifted many won't have money to buy nutriments."

Ironically, Israel has launched its operations at a time when the Oslo process had held out hope of yielding a final pact between Israelis and Palestinians. Scarred by a spate of suicide bombings, Israeli Prime Minister Ariel Sharon ordered the military operations declaring, "It is war on terror, and Yasser Arafat is the enemy of Israel."

But what this pithy remark hides are the two different approaches in the Israeli government to the Palestinian issue. There's of course Sharon's strong-arm, no-nonsense strategy. But there's also the path Labour Party leaders, foreign minister Shimon Peres and defence minister Binyamin Ben Eliezer want Israel to follow. Though emphatic about first rooting out terror, where they differ from Sharon is on the ultimate aim of the ongoing military operations—that it should pave the way for salvaging the aborted peace talks. They feel there is no alternative to the historic leadership of Arafat, and that removing him from Ramallah would postpone the peace settlement to another generation.

In contrast, a settlement with Palestine isn't Sharon's principal objective. He's bitter about the Oslo experience, believing it encouraged Arafat to break repeatedly his promise of eschewing violence in disputes with Israel. The terror attacks have only rendered him sceptical about any future peace negotiations with the Palestinians, more particularly Arafat. Sharon, anyway, never believed in stitching a final peace settlement, subscribing as he does to the view that Israel must have territorial guarantees (read occupation) against Palestinian violence and military threats from Iraq.

This schism in Israel's Palestine policy is evident to most here. Even as Sharon talks of threats to the free world from Palestinian terrorism, Peres and Eliezer pushed Labour into adopting the Saudi peace plan (proposing the normalisation of relationship between the Arab world and Israel in exchange for statehood for Palestinians and return of refugees) as the "political horizons" of the ongoing operations. Eliezer also cautioned against expelling Arafat from the region, claiming it would only treble the suicide attacks in Israel.

Such dire warnings, however, have only made Sharon more strident. People close to him say that should this operation fail to stop terror, Arafat would be deported. When European Union emissary Miguel Moratinos voiced his worries about Arafat's health, Sharon brusquely asked him to take the Palestinian leader on a one-way ticket out of the region. Likewise, Sharon thinks the Saudi peace plan involves him giving away too much, since it includes the right of Palestinian refugees to return to their envisaged homeland.

Many cite Zinni's presence to say Arafat continues to be a partner in peace. A late Thursday address by President George Bush—telling Israel to vacate its "occupations", while qualifying it with measured criticism of Arafat—confirmed the US intent to seize the diplomatic initiative, with a planned trip by secretary of state Colin Powell. Earlier, on "one of those gloomy nights", Zinni met Arafat in his besieged office for about 30 minutes—conveying to him Washington's ceasefire proposals enabling him to live out of his office with dignity. And dignity is one cause Arafat seems willing to abide by.