Muslims come out against the blast, but the "secular fabric" is rent 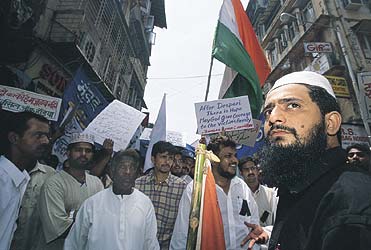 outlookindia.com
-0001-11-30T00:00:00+05:53
Banners that said nothing was an art only former sheriff of Mumbai, Nana Chudasama practised. Those who drive down Marine Drive to Nariman Point can't help but notice Nana's quip for the day. But now busier people are getting into the act. All over Mumbai, banners are beginning to appear. "Terrorism knows no religion. We strongly condemn the blasts —Raza Academy". As is obvious, several Muslim organisations have been quick to condemn the blasts.

Fear is the key. Will the frustration of a besieged city erupt into communal tension? Will Muslims be targeted? In the police commissioner's office, rapid action force personnel play the waiting game. The city's sophisticated people may talk about a certain "secular fabric of Mumbai," but the mistrust was always there.

The twin blasts has only served to further alienate the city's Muslim community. With rumours running around on grand plans to annihilate the majority community, the pressure is on Muslims to prove their secular Indian credentials. "There is unfortunately a lot of distrust towards the minority community now," says deputy CM Chhagan Bhujbal and adds: "The Shiv Sena will exploit this, may even fan this sentiment that usually follows a bomb blast."

One day after the August 25 blasts, taxi driver Sushil Diwedi has earned only Rs 150, a 75 per cent drop in business. "People are simply afraid to take a taxi," he says. Is he afraid? "Yes." Would he be wary of Muslim passengers. "Yes." At the upper end of the food chain, the fears and frustrations get more sophisticated. "I have a Muslim in my office," says Prasad Ajgaonkar who owns a software firm in Andheri. "I trust him. I like him. But I am wary of Muslims in general. I can't help wonder how some people come here, make bombs and remain undetected. Is it because the people around them turn a blind eye? How else can strange men from other parts of the world actually manage to come and live among them?"

Ajgaonkar is a rare case. Mostly people don't want to be publicly identified with their own suspicions. Why can't "they" integrate into the mainstream? Why should "they" define their whole way of life through religion?

Film maker Jotin Goel says his fear "is undeniable". He says "the reactions to a religious issue by any other minority will be very different". In his personal observations, he finds "a few educated Muslims aspiring to be modern but who cannot forcefully pursue or voice their beliefs for fear of obscurantist elements".

But addressing the problem at the social level is something the political class has always avoided.

The Bulls Don't Hear The Noise